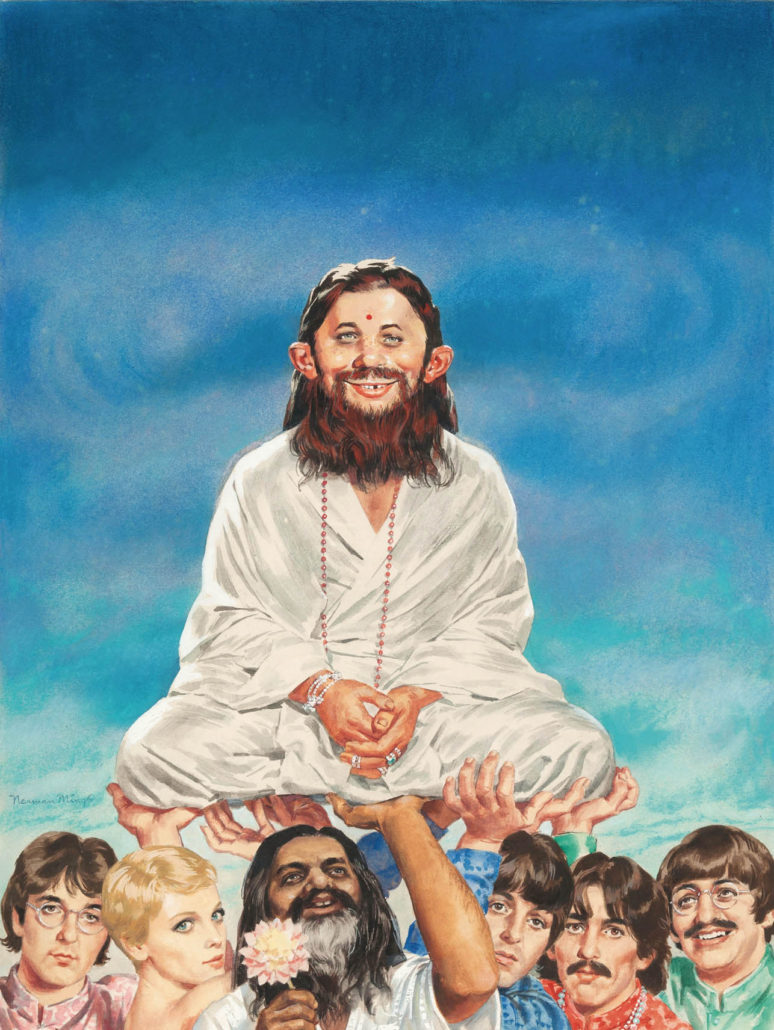 YORK, Pa. – Don’t laugh — no, wait — go ahead and laugh. That’s what you’re supposed to do when you look at a cover of Mad magazine. But a magazine is one thing; the original cover art for a Mad issue from the 1960s, like the painting you see here, is quite another. A pop-culture prize of this caliber should have no trouble at all commanding a very serious five-figure auction price.

This is the actual art Norman Mingo (American, 1896-1980) created for the cover of Mad‘s September 1968 issue. Mingo was Mad‘s principal cover artist from 1962 and 1976 and is considered the definitive illustrator of the character Alfred E. Neuman. The painting is being auctioned by Hake’s Americana in their first of three 50th anniversary sales, March 14-16. It’s significant not only because Mingo cover art is so rare and sought after, but also because it’s such a spot-on reflection of the flower-power era in which it was painted.

The mixed-media artwork spoofs the vibe that followed the 1967 “Summer of Love” with its depiction of Neuman as a spiritual guru, held aloft by the Beatles, Mia Farrow and the Maharishi Mahesh Yogi. But there is more truth than fiction to Mingo’s brilliant depiction of Neuman and his “disciples.” In February 1968, actress Mia Farrow and her sister, Prudence, traveled to India to the Maharishi Mahesh Yogi’s meditation retreat, where they met the Beatles and their entourage, who would become their cohorts in the quest for spiritual enlightenment. (Footnote in musical history: Prudence Farrow was the inspiration for the Lennon/McCartney song Dear Prudence, featured on the Beatles’ White Album, released November 1968.)

“When Mad magazine first started, it was satirical and goofy, but in the early to mid-1960s, its focus turned increasingly toward parodies of current events. That’s when pop culture became its fodder,” said Hake’s Americana President Alex Winter. “Mad art, especially anything by Norman Mingo, has been very strong in the marketplace, but his rare paintings for front covers will always attract a premium price because they simply aren’t available. This painting is an extraordinary find that collectors of Mad art are going to want.” Its pre-auction estimate is $35,000-$50,000.

Visit Hake’s to view a short video about the story behind the iconic September 1968 Mad cover art.