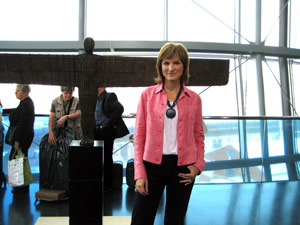 LONDON (ACNI) – BBC One’s Antiques Roadshow, the wildly popular British TV show that inspired its American counterpart on PBS Television, has aired a segment featuring its first-ever million-pound object. The Sunday, Nov. 17 edition of the program included an appraisal of an artwork by Antony Gormley OBE that was identified as the final model for a massive sculpture known as Angel of the North. Appraiser and art dealer Philip Mould valued the scale-model artwork at 1 million pounds (approximately US$1.5 million), making it the most valuable item ever brought in to Antiques Roadshow experts in Britain.

It took five people to transport the 4-foot bronze maquette to The Sage, a music and conference center in Gateshead, Tyne and Wear, northern England, where the Antiques Roadshow team taped the segment.

Gateshead Council, which owns the artwork, had sent one of its members, Councillor John McElroy, to obtain the appraisal. McElroy, whose father worked in the former coal mine where the full-size steel Angel of the North now stands, appeared shocked and nearly speechless upon receiving the news of the model’s value. “Amazing, absolutely amazing,” McElroy uttered.

The model had been constructed as an example to present to Gateshead Council in 1995, with expectations of gaining permission for the 65.6-foot-tall sculpture to be erected. The project was overwhelmingly approved, and shortly thereafter, financing was obtained and contractors hired to fabricate the Gormley design.

The Angel’s construction and placement on a panoramic hilltop site overlooking the Team Valley three years later spurred an international media event, with more than 20 television crews documenting each step of the process. During the night of Feb. 14, 1998, the steel sculpture made the long-awaited journey to its new home by police escort, traveling at just 10 m.p.h. At daybreak, the body of the Angel was lifted into position by a 551-ton crane and lowered onto 52 9.8-foot bolts. It took 20 minutes to complete the positioning and an entire day to assemble the sculpture, which had arrived in sections.

At 11 a.m. the first of the Angel’s wings was hoisted to adjoin the body, at around 4 p.m. the second wing was added. Its full wingspan, which measures 175 feet, exceeds that of either a Boeing 757 or 767.

The Angel’s imposing silhouette on reclaimed and landscaped terrain that had been a colliery from the 1720s through the late 1960s is approximately the height of a four-story building. As a landmark, it now rivals the famous Tyne Bridge, which links the cities of Newcastle-upon-Tyne and Gateshead. The figure can be clearly seen by more than 90,000 drivers a day on the A1 – that’s more than one person every second – and by passengers aboard the East Coast main line train that travels from London to Edinburgh.

While the citizens of Tyne and Wear have their priceless art treasure firmly in place for posterity, Gateshead Council now must decide on the future of its smaller $1.5 million artwork. While no formal statement has been issued, it has been reported that Gateshead Council members have no intentions of parting with the iconic model. 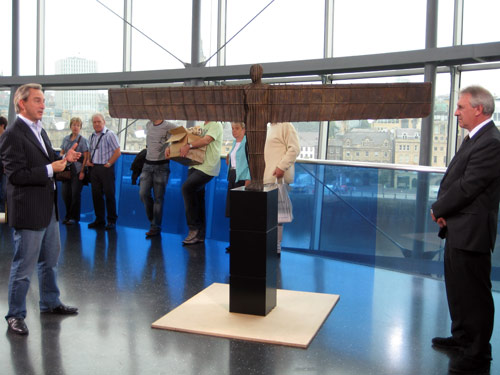