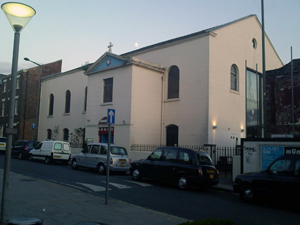 St. Peter’s Roman Catholic Church is Liverpool is now a restaurant. Image by Bazonka. This file is licensed under the Creative Commons Attribution-Share Alike 3.0 Unported license.

LONDON (AFP) – At one church, the only thing being worshipped is beer – at another, gleaming cars are on sale. Increasingly, it seems, a different kind of conversion is taking place at Britain’s churches.

Due to a decline in religion and the high costs of maintaining these historic buildings, a rising number of churches are being given new lives that may have horrified their founders.

Behind the imposing red-brick facade of one Presbyterian church in north London’s upmarket Muswell Hill district, throbbing pop music and barrels of Guinness are the first clues that there’s a new congregation.

The soaring Gothic arches remain but instead of an altar there’s a huge bar, while tables, stools and slot-machines stand in place of the pews. Built in 1902, the church’s beautiful exterior remains unchanged. Inside, it’s an Irish pub.

“If it was a church, there would be only two or three people here – but on Fridays and Saturdays, it’s packed,” said John Earl, a construction worker, as he nursed a pint.

“It is weird,” he admitted. “I feel I kind of have to respect it. I don’t mind being drunk here, but I don’t want people carving the pillars.”

At another table, 33-year-old Yamini pronounced the pub “beautiful.”

“It has a different look from the other pubs,” she said as she sipped red wine with a friend. “And it’s being used instead of being abandoned.”

Religious worship has been declining in Britain for years, and church authorities are increasingly forced to rethink the management of their huge – and very expensive – estates.

Policy varies between denominations. The dominant Church of England has strict rules on conversions meaning a building can only be sold if a committee approves its future use, after a lengthy process.

“Churches can’t be used for sex shops, gambling premises and things like that,” explained Jeremy Tipping, manager of the Church of England’s Closed Churches Team.

But a wide range of other church occupants have been given the nod – a climbing center in the city of Manchester; a circus school in Bristol, where trapezes hang from the rafters; a supermarket, a library, a Sikh temple.

“A church always looks like a church, no matter what it’s used for,” Tipping told AFP.

“When it has a tower and a spire and arched windows, the association will always be with the Church of England – so they are very, very sensitive that any future use must be one which is appropriate.”

But tough regulations have not stopped conversions from throwing up a few embarrassments for the Church of England.

Nor is the Catholic Church immune to such predicaments – its rules are less strict, leaving decisions about conversions up to local dioceses rather than a national committee.

In the northwestern city of Liverpool, St. Peter’s Church now houses a restaurant which hosts evenings celebrating that festival of all things ungodly, Halloween. “It’s deeply inappropriate and offensive for lots of Catholics,” said Sophie Andreae, a committee vice-chairwoman at the Catholic Bishops’ Conference of England and Wales.

The most common fate of ex-churches is to be transformed into homes – sometimes luxury ones, such as the ultra-modern seven-bedroom London house, complete with swimming pool, which went on the market for £50 million last year.

Rachel Chudley, a 28-year-old interior designer, bought a flat in an east London church four years ago. It’s far more modest than the £50 million mansion, but lacks none of the charm, with stone faces carved into the frames of her spectacular arched windows.

“We’re right up at the top of the church, at the steeple,” said Chudley, an agnostic, as she took AFP on a guided tour. “My family has joked and said, ‘Rachel is closer to heaven now!'” 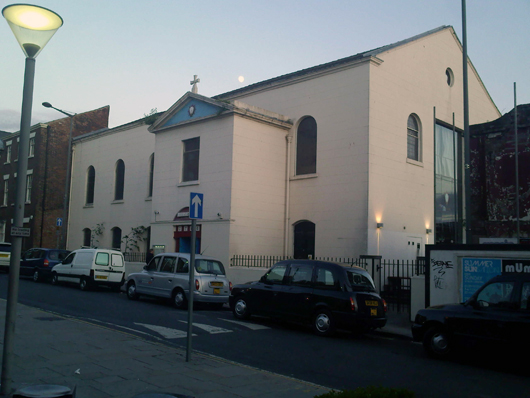 St. Peter’s Roman Catholic Church is Liverpool is now a restaurant. Image by Bazonka. This file is licensed under the Creative Commons Attribution-Share Alike 3.0 Unported license.