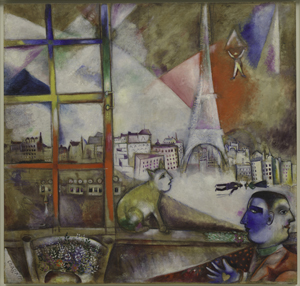 PHILADELPHIA (AP) – A new exhibition at the Philadelphia Museum of Art is taking a fresh look at the influence that Paris had on Marc Chagall and his fellow modernists from 1910 to 1920.

The show, “Paris Through the Window: Marc Chagall and His Circle,” opens Tuesday. It is being presented in conjunction with an international arts festival in Philadelphia that opens in April.

The exhibition “represents the Museum’s contribution to this festival and will focus on the powerful influence that Paris had on Chagall and his contemporaries,” museum director Timothy Rub said.

The show, located in the museum’s Perelman annex, includes roughly 40 paintings and sculptures culled mainly from the museum’s own collection but reconfigured in a new way. Other featured artists include Chaim Soutine, Amedeo Modigliani and Jacques Lipschitz.

Curator Michael Taylor said the show will provide visitors with “a unique opportunity to reconsider the cross-fertilization that took place” when Chagall and his contemporaries lived and worked in Paris.

Among the show’s highlights is Chagall’s painting Paris Through the Window from 1913, on loan from the Guggenheim Museum in New York. The work is a dreamlike and colorful interpretation of Chagall’s world outside his studio window in the La Ruche building near Montparnasse, a thriving artistic community and home to Chagall and fellow Eastern European artists who fled the repression and persecution of their homelands.

“This is indisputably Chagall’s early masterpiece,” said curator Michael Taylor. Chagall’s inspiration from Cubism and his enthusiasm for Paris, where he arrived after finishing art school in Russia, are clear in this and another massive work on display, Half Past Three (The Poet) of 1911.

Time was not always kind to Chagall, however, as political upheavals repeatedly interrupted his life and work. He went back to Russia after the start of World War I, creating dark works reflective of the war and joyous pieces recalling his childhood in Vitebsk, now in Belarus.

He returned to Paris after the war, but he and many of his fellow Jewish artists were again forced to flee with the Nazi occupation of Paris. He left in 1941 and spent the war in New York, returning again to his beloved France in 1948, where he lived and worked until his death in 1985.

The exhibit is the museum’s contribution to the Philadelphia International Festival of the Arts, a citywide celebration that runs from April 7 to May 1.

Organized by the Kimmel Center for the Performing Arts around the theme of early 20th-century Paris – what Taylor called “one of the most experimental and creative periods in Western art” –  the festival will include 135 events presented by 1,500 artists from 140 artistic and cultural groups in a variety of collaborations.

“We thought long and hard what would make the most sense (for the festival), and I immediately thought of Chagall,” Taylor said.

Dance, theater, visual arts, music, culinary and fashion worlds will be presenting events and newly commissioned works for the festival. Philadelphia-based Pig Iron Theatre Company and The American Poetry Review will hold “performative poetry readings” at the museum by Parisian poets of the era, and a musical cabaret inspired by Chagall’s wife, Bella, will make its world premiere at a downtown theater.

Philadelphia International Festival of the Arts: 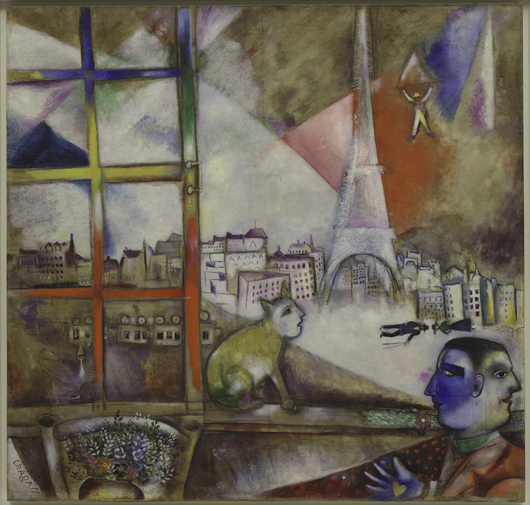 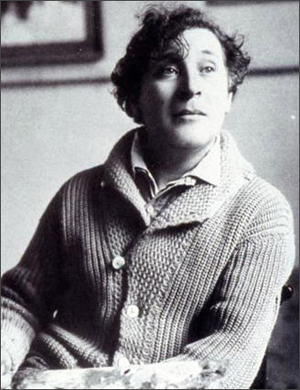 Chagall in a 1921 photograph taken in Paris. Image courtesy of Wikimedia Commons.