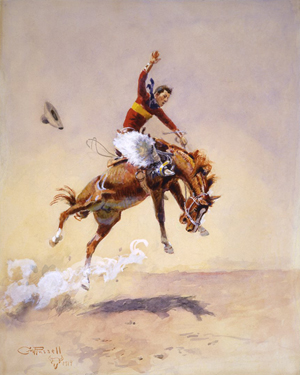 The watercolor ‘High, Wide and Handsome’ sold for $300,000 at the auction. Image courtesy C.M. Russell Museum.

The watercolor titled High, Wide, and Handsome sold at the low end of estimates at the auction on Saturday, The Great Falls Tribune reported.

A letter written by Russell that also contained a watercolor sold for $300,000. An oil on canvas painted by Andy Thomas depicting Russell finishing a painting, called Russell Paints a Masterpiece, sold for $200,000. That exceeded the preauction estimate of $85,000.

The auction is part of Western Art Week, held the same month as the birthday of Russell, who was born March 19, 1864. The auction raised more than $3.1 million, slightly more than last year.

“I think it was a smashing success,” said C.M. Russell Museum board chairman Joe Masterson. “The whole weekend was a tremendous success. It exceeded our expectations.”

The $550,000 paid for one work of art topped last year’s high mark of $375,000, which is what two Russell watercolors brought in separately.

“I had absolutely no idea there was that much interest (in the painting),” said Gilleon.

“That’s why we have auctions,” said auctioneer Troy Black. 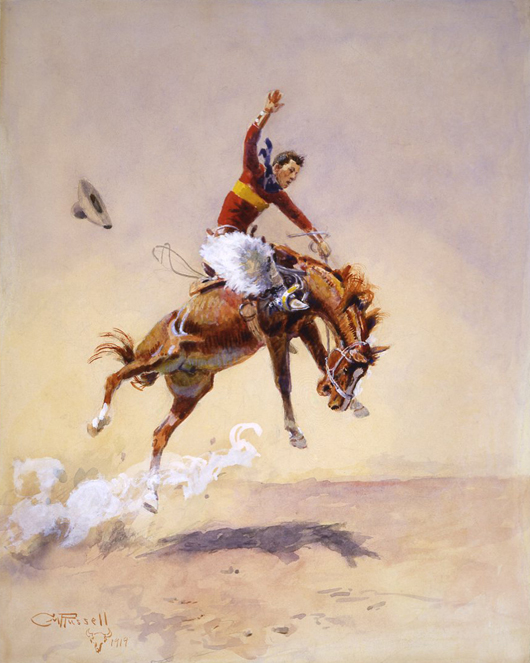 The watercolor ‘High, Wide and Handsome’ sold for $300,000 at the auction. Image courtesy C.M. Russell Museum.