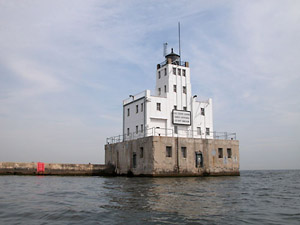 The Art Deco-style Milwaukee Breakwater Lighthouse went into service in 1926. This work is licensed under the Creative Commons Attribution-ShareAlike 3.0 License.

MILWAUKEE (AP) – If the federal government took out a want ad, it would probably say this: Free to a good home, Milwaukee’s breakwater lighthouse.

The U.S. Coast Guard has been shedding lighthouses for several years, and now it’s time for the light that has stood sentinel over the Milwaukee harbor to get the heave-ho.

It could be a museum or the ultimate man cave. And not just anybody can snap it up. First dibs go to local governments or nonprofit groups willing to pay to maintain it under federal guidance. If none step forward, the lighthouse will be auctioned to the highest private bidder.

Yes, it would be way cool to own a lighthouse, but there are some downsides, like actually getting there – it requires a boat or a very long swim. According to accounts of Coast Guard members assigned to spend multiday shifts in four-man crews at the lighthouse before it became fully automated in 1966, landing a boat at the breakwater can be a bit treacherous since there’s no pier or jetty.

When the foghorn is blowing forget about sleep. When the weather is stormy, it’s really rough, which is why the windows and portholes are fitted with half-inch thick glass.

While it’s not as beautiful or iconic as other lighthouses, the Milwaukee Breakwater Light has a lot of room with a two-story Art Deco keeper’s quarters. The fourth-order Fresnel lens is no longer there; it’s on loan to the Wisconsin Maritime Museum in Manitowoc. The tower is centered above the living quarters with a round cast-iron lantern room and a balcony. So as a bonus, it would be a great place to watch fireworks on the lakefront.

The Coast Guard will continue to maintain the light beacon and foghorn, but the lighthouse has outlived its usefulness, said Arthur Ullenberg, realty specialist for the U.S. General Services Administration.

“They’re trying to get out of the lighthouse business,” Ullenberg said of the Coast Guard.

Built in 1926, the Milwaukee Breakwater Light was one of the last lighthouses constructed on the Great Lakes. It’s what’s known as a crib light because it was built away from land on a timber crib making it easier to be seen by passing ships. Several lighthouses built during the 1920s around the Great Lakes are similar – constructed using the technology of the day, concrete and steel I-beams – but none exactly like Milwaukee’s, said Terry Pepper, executive director of the Great Lakes Lighthouse Keepers Association.

“Lighthouses are still necessary but not as necessary as they used to be. Probably if the Coast Guard would build a light now it would be a pole with a light on it,” Pepper said. “Hopefully, Milwaukee is a large enough city and there’s enough historical interest and people with deep pockets that will take ownership.”

Under the 2000 National Lighthouse Historic Preservation Act, the Coast Guard turns over the buildings to the U.S. National Park Service, which publishes their availability. Though most are acquired by nonprofit groups for free in return for restoring and maintaining them for public use such as tours and museums, those that get no interest are eventually auctioned. If the Milwaukee Breakwater Light gets no takers by the Aug. 1 deadline for local governments and nonprofits, it will immediately be put up for auction.

Last year, no groups stepped forward to acquire lighthouses in Manitowoc and Kenosha. A New York man paid $30,000 for the Manitowoc lighthouse, which is a similar construction to Milwaukee though it’s on the shore. The Kenosha North Pierhead Light will again be placed on the auction block this year after no one bid on it last fall. Ullenberg said the minimum bid for the Kenosha light, which is not livable since it’s simply a round tower with a circular staircase inside, will likely be $5,000.

Between six and 10 lighthouses are either given away or sold each year in the United States with some ending up as bed-and-breakfasts or weekend getaways while others are turned into museums. The prices range from $2,000 to as much as half a million dollars. Some require extensive renovation.

“There are some individuals who have successfully restored them,” said Kraig Anderson, operator of lighthousefriends.com. “Then the public no longer has access, but it’s a good thing someone is putting money into the lights.”

Local governments or nonprofits must submit a letter of interest to the U.S. General Services Administration by Aug. 1 and then an inspection tour is arranged. After the inspection, a lengthy application is required. If everything goes well, the keys are turned over within several months. 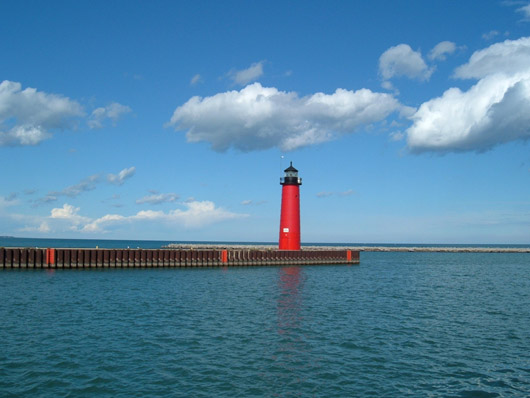 The 50-foot-tall Kenosha (Wis.) North Pierhead Light, which will be offered at auction this year, has no living quarters. Image courtesy of Wikimedia Commons.

Lake Huron lighthouse near Mackinac Island up for auction

Iconic New England lighthouses are back in the spotlight