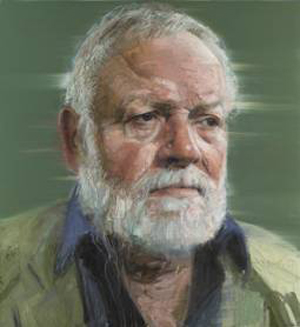 LONDON – A Northern Ireland artist has won the Visitors’ Choice Award at this year’s BP Portrait Award exhibition at the National Portrait Gallery, London, for his portrait of Belfast-born poet Michael Longley.

The Dialects of Silence (Portrait of Michael Longley) by Colin Davidson from Bangor, County Down, Northern Ireland, received 2,814 votes from visitors who are invited to name their favorite portrait in the annual competition-based exhibition. This year, 23,381 votes were cast between June 21 and Sept. 9 – some 11 per cent of the approximately 220,000 who had visited the gallery before voting closed.

Davidson, 43, caught the public’s imagination for his penetrating painting of the distinguished Irish poet Michael Longley CBE, 73. He says in his portraits he strives to “capture the moment when the sitter is lost in their own thoughts.”

The second most popular was Silent Eyes by Greek artist Antonios Titakis (2,009 votes), and the third Today You Were Far Away, a self-portrait by another Northern-Irish artist, Ian Cumberland (1,266 votes).

Fourth position went to the BP Portrait Award First Prize winner Auntie by Aleah Chapin (974 votes) – an unusually high Visitors’ Choice placing for a portrait endorsed by both the public and the judges.

For the third time this year, visitors were able to vote on a touch-screen positioned just outside the exhibition, which runs at the National Portrait Gallery until Sept. 23. The top three can be seen at http://www.npg.org.uk/bp

Davidson (b. Oct. 15,1968) painted his oil on linen portrait of Longley from life. Longley met the artist at the launch of the new Lyric Theatre, Belfast, where the foyers are hung with portraits by Davidson. Davidson’s work has been seen in solo exhibitions in Dublin, Belfast and New York and numerous group exhibitions including the BP Portrait Award 2011.

One of Northern Ireland’s foremost contemporary poets, Michael Longley is, says the Poetry Foundation, “renowned for the quiet beauty of his compact, meditative lyrics” which are also “marked by sharp observation of the natural world, deft use of technique, and deeply felt emotion.” Since his debut volume, Ten Poems in 1965, Longley has won the T.S. Eliot Prize, the Whitbread Poetry Prize and the Queen’s Gold Medal for Poetry.