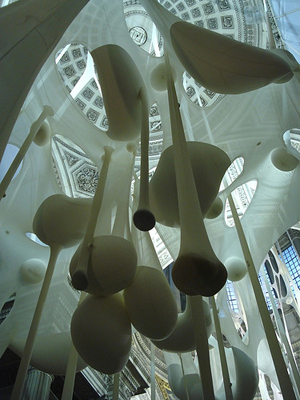 One of Ernesto Neto’s most acclaimed installations is at the Panthéon in Paris called ‘Léviathan Thot.’ This work is licensed under the Creative Commons Attribution-ShareAlike 2.5 License.

BUENOS AIRES, Argentina (AP) – A monumental new sculpture by Brazilian artist Ernesto Neto has debuted in Buenos Aires’ Puerto Madero district, where decaying mills and warehouses have given way to a futuristic landscape of soaring skyscrapers and luxury hotels.

Knitting furiously with 30 helpers for two months, Neto filled a vast space in a former grain mill with colorful crochet netting, one knot at a time. Then he filled the nets with thousands of plastic balls to create swaying pathways for people to walk through, and suspended it all from the walls and ceiling. The result is a huge organic form that seems to float high above the floor, like vines spreading through the canopy of the Amazon jungle.

But the work isn’t complete without an audience, which was finally allowed in last week. This is art people are supposed to touch, push through and even hang from the form, letting their animal selves emerge as they unsteadily climb through the soft, pliant forms.

Some visitors complained that the experience was unsettling, but Neto said “stability is not normal.”

“People fear instability, thinking it’s a crisis, but instability is the natural state of things,” Neto said Thursday as he welcomed people to join his children, who were frolicking above him in the sculpture he calls Crazy Hyperculture in the Vertigo of the World.

Neto was invited by Argentine hotel magnate and developer Alan Faena to create the work for his newly opened Faena Art Center, which will serve as a commissioning hub for a lively calendar of music, art and culture. Along with the nearby Amalia Lacroze de Fortabat art museum and musical performances sponsored by his Faena Hotel, it gives visitors a compelling reason to leave the historic center of Argentina’s capital and explore a part of town where a construction boom has outpaced public life.

Wealthy Latin Americans have been snapping up the district’s luxury apartments as hedges against inflation, but many remain empty for now, bought as investments.

“It’s like all human construction—very arid, dry, too square for me,” Neto said. “My work is different, inviting. If only we could build houses like trees, growing organically, working with nature to grow. It’s a fantasy I have. Because we are nature, there is no separation. It’s a symbiosis. We are here to live, to know that life is good, to be happy.”

In the early 1900s, Puerto Madero helped feed the world with grain, and the former mill where Neto’s work now hangs was at the center of it all, processing up to 1,000 tons of wheat a day. But the property had been decaying for years when Faena began restoring it in February 2002, at the depths of Argentina’s last economic crash.

His timing was fabulous. Money rushed in as Argentina swung from bust to boom. His properties now include a luxury hotel, apartments and office space that straddle seven city blocks.

“The art center is part of the whole vision,” said Faena, who wore his trademark white outfit, from wide-brimmed hat to designer shoes, as he inaugurated the center. “We took a space that was destroyed, abandoned by the city, and we built it into a new center for art. This vision won’t stop, ever. The essence of this transformative vision was planted long ago, a space that enables artists to grow and the people to come and enjoy themselves.”

Art has brought new life to decaying urban landscapes the world over. Artists move in, then galleries open, followed by high-end apartments and more gentrification. But in this part of Buenos Aires, at least, the opposite has happened.

“They’re just fast-forwarding to the luxury apartment status and the art is coming after the fact,” said the Tate Modern’s international art curator, Jessica Morgan.

Of course, artistic spaces are dependent on the people who come to them, which is why Morgan said the Faena Art Center—and the money it can provide as part of its commissions—is so important. “It’s about creating something new and giving an opportunity to artists to experiment in a very unique space,” Morgan said.

“Buenos Aires has such a strong history of modern and contemporary art. It has been the formative place for movements of artists since the early 20th century, with very good galleries, excellent younger artists,” she added. “It’s a place you can’t be in without having a sense of the living contemporary culture. And it continues to evolve.”

Faena is clearly thrilled that his properties are at the center of this trend.

“This is the Argentine moment,” he said. “Buenos Aires is a city that has no reason to be envious of any other in the world. We have an amazing culture.”