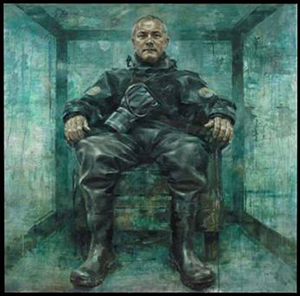 LONDON – A major new portrait of contemporary artist Damien Hirst will feature in a headline display of artwork by Jonathan Yeo at the National Portrait Gallery in September, it was announced today. The exhibit will feature several new and previously unseen artworks, including the striking, six-foot-high oil-on-canvas portrait of Hirst.

The portrait shows Hirst sitting in a chair, dressed in a chemical dry suit and holding a mask: an outfit chosen to reflect the tools of his trade. Yeo and Hirst worked together when discussing the composition of the portrait, and Hirst’s commanding pose was chosen as an ironic reflection upon his perceived position within today’s art world.

Jonathan Yeo commented: “Essentially it is a portrait by an artist of another artist known for doing completely different work. Damien is probably best known for his avant-garde sculptures, and I, for my portraits. People assume we have completely contrary positions – of tradition and modernity, painting and the physical – however, artists are always interested in other artists, and how and what they achieve in their work. Damien, and his undeniable ongoing impact on the art world, is endlessly fascinating.’

“I wanted to reference elements of both who Damien is and what he has done,” Yeo continued. “The mask in his hand helps create an ambiguity, suggesting possible military connotations, that he might be diving or confronting a riot. Even when we realize it’s a chemical dry suit, which he uses to make his formaldehyde works, it’s not entirely clear if he is making something or whether he is being pickled in one of his own tanks. This power balance is something of which we were both conscious through the creation of the portrait.”

Yeo said the pose was intended to reflect, ironically, Hirst’s supposed status as dark overlord of the contemporary art scene. “Hopefully some observers will be reminded of Velasquez’s and Bacon’s Popes. Ultimately his faint smirk is the giveaway, both that he was a knowing collaborator in the choice of composition, and that his mischievous sense of humour is never far from anything he does,” Yeo said.

Damien Hirst observed: “Like Turner strapping himself to the ship’s mast in order to create a true likeness of a storm, Yeo time and time again achieves what should be impossible: creating a true picture, an image or a glimpse, of people we think we know and of those we’ve never met.”

Jonathan Yeo Portraits, the National Portrait Gallery’s first display dedicated to the artist’s work, will include innovative portraits – all produced from life – of some of today’s leading cultural, media and political figures, many of whom sat for portraits for the first time with Yeo. The display will present an overview of the artist’s work to date, beginning with the drawings he made of the party leaders on the 2001 general election campaign trail, and including private studies of his family and portraits of well known figures such as media mogul Rupert Murdoch, model Erin O’Connor, artist Grayson Perry and actress Sienna Miller.

Jonathan Yeo is one of the most highly-regarded portrait painters working in Britain today. A regular exhibitor in its BP Portrait Award, in 2010 the National Portrait Gallery commissioned Yeo to paint a portrait of broadcaster Sir Michael Parkinson.

A new, fully illustrated book titled The Many Faces Of Jonathan Yeo with texts by Martin Gayford and Sarah Howgate, will be published by Art / Books in Oct 2013. With contributions from Alastair Sooke, Tim Marlow, Philip Mould, Giles Coren, Shebah Ronay and Michael Parkinson it is available at £24.95 hardback.