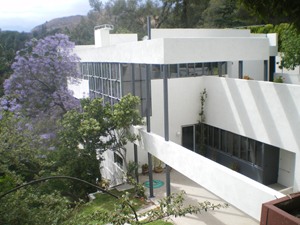 A Richard Neutra design, this is the Lovell House at 4616 Dundee Dr., Los Angeles, built in 1971. It is believed to be the first steel-frame house built in the United States and also is an early example of the use of gunite (sprayed-on concrete). Image by Los Angeles, licensed under the Creative Commons Attribution-Share Alike 3.0 Unported license.

LOS ANGELES (AP) – The streets of Beverly Hills are graced with homes by such 20th-century architectural luminaries as Richard Neutra, John Lautner and Paul Williams for a simple reason: The affluent enclave’s residents of decades past could afford to build them.

But with those structures in increasing jeopardy as preferences turn more toward larger homes, the city is poised to reconsider its laissez-faire approach toward properties with claims to cultural importance.

Beverly Hills City Council members plan to discuss a potential plan Tuesday to halt the demolition of potentially significant structures until its planning department can come up with guidelines for a preservation ordinance, which – unlike many of its Southern California neighbors – it doesn’t now have.

The panel could vote to hold a meeting in the coming days to take action on the proposed moratorium, which would grant a reprieve to a 1954 Neutra-designed home known as the Kronish House that’s being eyed for demolition.

“We need to button down some sort of ordinance that addresses preservation needs,” Beverly Hills Mayor Barry Brucker said. “There is something wrong with having a historically important building and you take out a demolition permit and 10 days later you can take a sledgehammer to it.”

Brucker said the city hasn’t needed a preservation ordinance in the past because its wealthy residents had traditionally been eager to restore and live in its architectural gems.

But many recent property buyers are more interested in razing the often modest-sized, architecturally significant homes so larger structures can be built, he said. The average size of a new single-family home in Beverly Hills increased from less than 4,200 square feet over the 1970s to more than 7,300 square feet over the 2000s, according to San Diego-based tracking firm DataQuick.

The city’s bout of architectural soul searching was prompted by an apparent plan by the current owner of the Kronish House to secure a demolition permit for the property, which at some 6,900 square feet is already among the largest of its architecturally pedigreed peers.

A firm called Soda Partners LLC bought the home that sits on two acres for $5.8 million at a foreclosure auction in January. Months later, it put the property back on the market as a teardown for $14 million, not even mentioning in its listing that it included a home by the famed architect until it was pressured to do so by preservationists.

Jeffrey Soza, who is named in business records as Soda Partners’ agent of service, did not return a call seeking comment.

The Kronish House is not visible from the street, but real estate agent Mike Deasy, who specializes in architecturally significant properties, characterized it as dilapidated but salvageable.

Los Angeles Conservancy advocacy director Adrian Scott Fine said the flat-roofed home with sliding glass doors that open up on a swimming pool area is an important example of Neutra’s signature “pinwheel” design style that places a house’s living room at its center.

Fine lamented Beverly Hills’ record of allowing property owners to demolish homes by famous architects, such as Lautner’s 1951 Shusett House, a 3,000 square-foot home that is in the process of being replaced with a structure some three times larger.

He also criticized Beverly Hills for allowing the demolition of homes with cultural significance beyond their architectural importance, such as the Mediterranean-style structure that was home to George Gershwin in the 1930s and was later owned by singer Rosemary Clooney. It was torn down in 2005.

“There’s a need for growth and development in every community but there’s also a need for preservation,” Fine said.

Brucker said the Beverly Hills council hopes to devise a new ordinance to take that need into account, while it works on other new legislation that gives tax breaks to homeowners who maintain architecturally or historically significant features of their properties.

He said the city’s prospective historic preservation ordinance wouldn’t try to scuttle demolitions altogether, but might delay them long enough to come to some accommodation between property owners and preservationists, even if it means actually having important structures physically relocated.

But Brucker said Beverly Hills’ special challenge is to weed out the structures that require protection from the city’s copious selection of those that have more tenuous connections to the rich, famous and architecturally talented.

“You have homes that various famous lived in, but does that make them historic? You have famous architects but they may not be the architect’s most famous work,” he said. “So I really want to send things off to the planning commission so we’re not all over the map and protecting a home that Ozzy Osbourne lived in or Beckham lived in just because they were famous.” 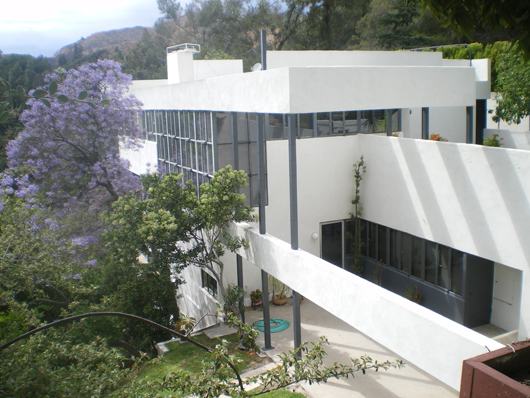 A Richard Neutra design, this is the Lovell House at 4616 Dundee Dr., Los Angeles, built in 1971. It is believed to be the first steel-frame house built in the United States and also is an early example of the use of gunite (sprayed-on concrete). Image by Los Angeles, licensed under the Creative Commons Attribution-Share Alike 3.0 Unported license.

Treasure trove of coins to sell at Michaan’s, Aug. 8