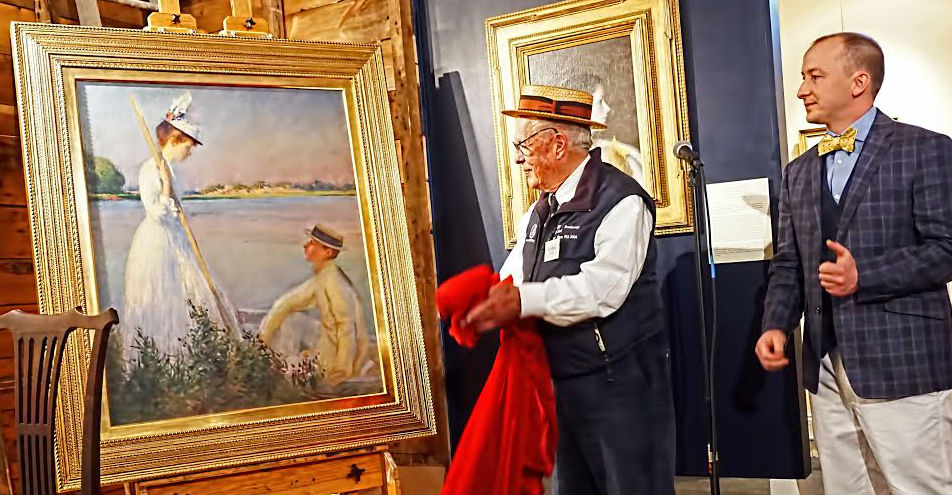 CONCORD, N.H. (AP) – An oil painting by American impressionist Edmund C. Tarbell that was rolled up and forgotten for more than a century has been restored just in time to be included in a large retrospective of the artist’s work.

Woman With an Oar and a Gentleman joined the exhibit at the Discover Portsmouth visitors’ center Friday after months of restoration work by art conservationist Jeremy Fogg. The “Illuminating Tarbell” exhibit opened in March and ends June 3.

“I would’ve liked to have it done sooner, but I wasn’t going to rush the conservation just to get it into the show,” said Fogg.

Based on his research, Fogg estimates that the painting was done around 1891, about five years after Tarbell returned from his studies in Paris and as he was embarking on his career in Boston. Tarbell, a founder of the Boston School style of painting, spent his summers in New Castle, New Hampshire, and later lived there full time until his death in 1938.

Fogg suspects the painting was damaged at some point during Tarbell’s lifetime – there was a burn mark as if it had rested against a woodstove – and got tucked away. Tarbell died without a will, and his belongings were divided among numerous relatives. A few years ago, one of the family members found the painting rolled up with several other canvases alongside a collection of props and other items.

Fogg recognized the painting instantly because a nearly identical version is part of the White House art collection, and he had tried unsuccessfully to borrow it for the show.

“We have these moments in conservation where you get excited, but a lot of times you have to deliver bad news – signatures not being right or paintings not being what you thought they were. But I’ve also had these moments that are sort of highs,” he said. “This is right up there with one of the more exciting things I’ve ever been a part of.”

The restoration process was painstaking. Just unrolling the painting, using carefully placed weights, happened inches at a time and took several weeks. Then came work to stabilize the canvas, clean it, fill in damaged areas and touch up the paint and varnish. Multiple lights were used to make sure the colors were as accurately matched as possible.

“Colors change under different lights, especially blues, which this painting has a lot of,” Fogg said.

The painting measures about 44 inches by 34 inches and likely depicts a scene from Cape Cod, Fogg said. It shows a woman holding an oar, with a man seated next to her. Tarbell often painted his wife and her sisters, Fogg said, and he believes one of the sisters is featured in the restored painting.

The exhibit, which Fogg curated, includes more than 50 works by Tarbell, many on loan from private collections. A second exhibit, “Illuminating Tarbell: Legacy in Action,” on the second floor gallery at Discover Portsmouth, features works by living artists who work in the Boston School style.