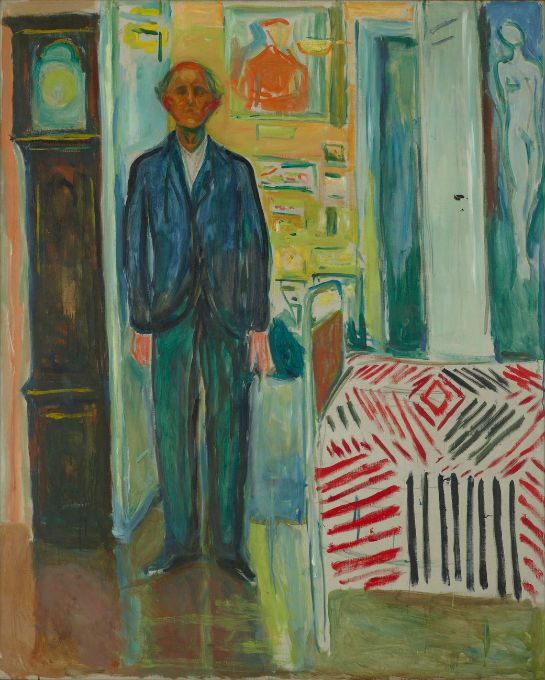 SAN FRANCISCO — The San Francisco Museum of Modern Art announces the global debut of the exhibition “Edvard Munch: Between the Clock and the Bed,” on view through Oct. 9. Featuring approximately 45 paintings produced between the 1880s and the 1940s, with seven on view in the United States for the first time, this exhibition uses the Norwegian artist Edvard Munch’s last significant self-portrait as a starting point to reassess his entire career.

Organized by SFMOMA, The Metropolitan Museum of Art, New York and the Munch Museum, Oslo, “Edvard Munch: Between the Clock and the Bed” brings together Munch’s most profoundly human and technically daring compositions of love, despair, desire and death, as well as more than a dozen of his self-portraits to reveal a singular modern artist, one who is largely unknown to American audiences, and increasingly recognized as one of the foremost innovators of figurative painting in the 20th century.

“When you consider that Munch felt that he didn’t really hit his stride until his 50s and that his career doesn’t map against traditional paths of art history, then the latter part of his career warrants a closer look,” said Gary Garrels, curator of painting and sculpture at SFMOMA. “Munch’s influence can be felt in the work of many artists such as Georg Baselitz, Marlene Dumas, Katharina Grosse, Asger Jorn, Bridget Riley and particularly Jasper Johns, who became fascinated by the cross hatch patterns in Munch’s Self-Portrait. Between the Clock and the Bed.”

“Munch really presents an alternative to the traditional school-of-Paris-driven history of modernism that has long been dominant, but tells an incomplete account of the art of the past century,” added Caitlin Haskell, associate curator of painting and sculpture at SFMOMA.

Seven works in the exhibition make their United States debut including Lady in Black (1891), Puberty (1894), Jealousy (1907), Death Struggle (1915), Man with Bronchitis (1920), Self-Portrait with Hands in Pockets (1925–26) and Ashes (1925). The exhibition will also include an extraordinary presentation of Sick Mood at Sunset. Despair (1892), the earliest depiction and compositional genesis of The Scream, which is being shown outside of Europe for only the second time in its history.

As a young man in the late 19th century, Edvard Munch’s (1863–1944) bohemian pictures placed him among the most celebrated and controversial artists of his generation. But as he confessed in 1939, his true “breakthrough came very late in life, really only starting when I was 50 years old.” One of Munch’s last works, Self-Portrait. Between the Clock and the Bed (1940–43) — with its themes of desire, mortality, isolation and anxiety — serves as a touchstone and guide to the approximately 45 works in the exhibition. Together, these paintings propose an alternative view of Munch as an artist as revolutionary in the 20th century as he was when he made a name for himself in the Symbolist era.

Born and raised in Kristiania (now Oslo), Norway, Edvard Munch’s career spanned 60 years and included ties to the Symbolist and expressionist movements, as well as their legacies. Following a brief period of formal training in painting at the Royal School of Art and Design in Kristiania, Munch exhibited widely throughout Europe affecting the trajectory of modernism in France, Germany and his native Norway. While best known for the paintings and prints titled The Scream, Munch was a prolific creator who left a body of work that includes approximately 1,750 paintings, 18,000 prints and 4,500 watercolors as well as sculpture, graphic art, theater design and film.