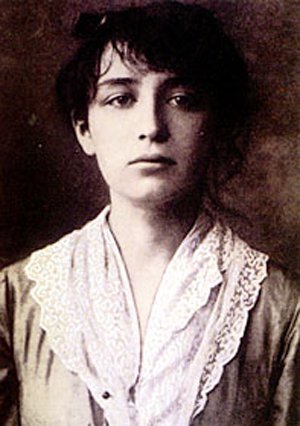 PARIS (AFP) – A French art expert Thursday unveiled evidence he says proves that a silver statuette of a woman bent over in suffering is an unknown work by the 19th-century master Auguste Rodin.

The unsigned work, 9 inches tall, depicts a female figure, curbed over as if in pain, with a draped fabric clenched between her thighs.

Art expert Gilles Perrault presented a 60-page report to reporters in Paris on Thursday that purports to authenticate it as Rodin. The statue itself was not displayed for security reasons.

The silver statuette first surfaced in the 1980s after an antiques dealer from the western French city of Nantes spotted it in a flea market, and sold it to its current owner, a private collector.

Perrault, himself a sculptor, is an official art expert for France’s Cour de Cassation who has carried out more than 750 appraisals connected to Rodin’s work, including to sniff out fakes.

He says he has studied the figure for 24 years and is now “intimately convinced” it is by the sculptor, who lived from 1840 to 1917.

He believes it was carried out around 1886, and that it is a reference to Rodin’s tortured affair with his lover and disciple Camille Claudel – specifically to several abortions which she is believed to have undergone during their time together.

“I decided to make my research public because we are finding more and more evidence that points in this direction,” said Perrault, who has kept the Rodin museum in Paris informed of his investigation, step by step.

Contacted earlier this week, the Rodin museum said it was not convinced.

“We are very, very sceptical, in the absence of documents referring to the existence of such a silver statuette, or to any other works that relate to it,” said the museum’s asset curator Aline Magnien.

“This work has no pedigree,” she said. “Gilles Perrault has created a fiction.”