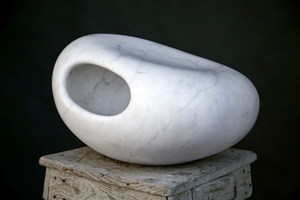 NEW YORK – Eykyn Maclean will present the first ever exhibition in the United States of internationally renowned sculptor Kan Yasuda. The exhibition, open to the public May 6–June 27 at 23 East 67th St., will feature over 20 of the artist’s new sculptures.

“Having followed Kan’s career in Europe and Japan, we are delighted to have the opportunity of introducing his work to an American audience,” said gallery partner Christopher Eykyn. “Working together with Kan, we have selected a group of works that best represent this important artist at the height of his career.”

Born in Japan in 1945, Yasuda has divided his time between Hokkaido, Japan and Pietrasanta, Italy for over 40 years, and his work deftly merges the cultural traditions of East and West. Working in an abstract vocabulary of smooth surfaces and sensually rounded forms with antecedents in the sculpture of Brancusi and Arp, Yasuda’s sculpture possesses the meditative stillness and tranquillity that may call to mind Eastern philosophy or religion, but for Yasuda it is the ability of art to connect with mankind in general that motivates his practice. He works in a range of scales from the intimate to the monumental, imbuing each with a palpable presence that lingers in the minds of viewers long after their visual contact with the work.

Yasuda’s painstaking technical process begins with the stones themselves, which he sources from the famous Carrara quarries, near his studio in Pietrasanta. He chooses the marbles carefully, working with the pure whiteness of statuario marble, the deep blacks of black granite, and the white marble with rich, dark veins for which Carrara is famous. Carved entirely by hand, Yasuda has long believed touch to be a critical part of the process of making his art and of viewing it, and has often welcomed viewers of his large outdoor sculptures to touch their surfaces and even to climb or lie on them.

In 1992, together with the city of Bibai in Hokkaido, the artist’s hometown, Yasuda created Arte Piazza Bibai, a sculpture park that spans 17 acres and includes 40 of the his works. Free to visit and open to the public year-round, the park has revitalized the city and in 2002 earned the Togo Murano Award of Japan for best architectural project. In 1994, Yorkshire Sculpture Park presented a solo exhibition featuring 18 of Yasuda’s large-scale works.

Peter Murray, founder and executive director at Yorkshire, writes of Yasuda’s work as “sculpture for all seasons,” noting that while marble can at first appear intensely white and stark, “under the sensitive but determined hand of Kan Yasuda it assumes a responsive aura adapting to the lush green of late spring, the buttercup yellow of an English summer, the rust of autumn or the icy white of winter.” 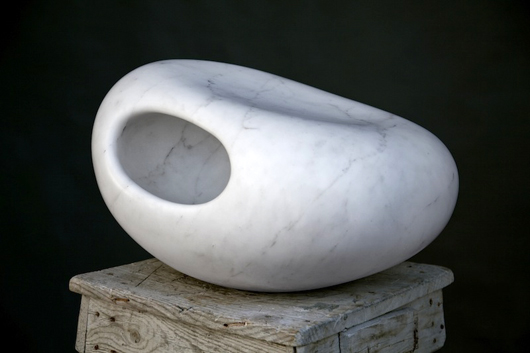 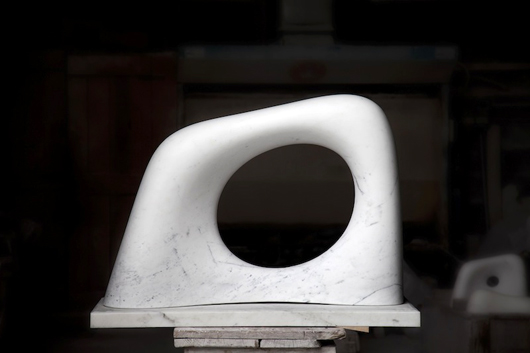