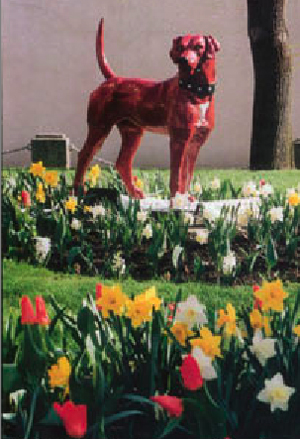 Morley’s Dog has become a beloved icon of the City of Johnstown, Pa. Image courtesy of the Johnstown Area Heritage Association.

JOHNSTOWN, Pa. (AP and ACNI) – Johnstown’s famous dog has gotten a makeover and will be back on public display.

The centuries-old statue known as Morley’s Dog was a popular feature in a Johnstown park for decades, until it was removed for restoration more than seven years ago, the Johnstown Tribune-Democrat reported.

The newly refurbished statue was on display over the weekend at AmeriServ Flood City Music Festival. Officials are working to find the pooch a permanent home indoors.

The statue was swept away from the lawn of an iron industry executive in the Great Flood of 1889, recovered from a huge pile of debris, and later donated to the city.

The Johnstown Area Heritage Society (JAHA) says the statue was made in the late 1800s by New York City’s J.W. Fiske Iron Works. Cambria Iron executive James Morley bought the statue and kept it on his lawn at Main and Walnut, until the May 31, 1889, flood devastated the town. It was recovered after the flood and returned to the family. The statue was eventually donated to the city in the 1940s.

Many came to believe the statue was a likeness of a real dog; others that it was specifically modeled on the likeness of a dog that saved a child during the flood. The historical society said neither is true, but the misconception probably was fueled by a reference to the flood and the statue in the 1977 Paul Newman movie Slap Shot.

In actuality, the famous statue was ordered out of a catalog.

“It was manufactured out of zinc, which was a metal frequently used for statuary in the 1800s,” JAHA president Richard Burkett told Auction Central News. “It was a lawn ornament and not made to last forever. Like the zinc Civil War statues that are now deteriorating and requiring restoration, the dog had not weathered well.”

“At some point it had been vandalized, and to keep it from falling apart, someone had filled it with concrete. Concrete expands, and it caused giant cracks all over the statue. This made restoration very difficult. It had to be taken apart so the concrete could be scraped out, which was a laborious process, ” Burkett said.

The heritage society continues to accept donations from the public to help pay the remaining bills associated with the restoration of Morley’s Dog. Morley’s Dog by donating to this campaign. There are three ways to contribute:

• Drop off your donation at the Heritage Discovery Center, 7th & Broad Streets, or at the Johnstown Flood Museum, 304 Washington Street.

A limited quantity of Morley’s Dog T-shirts are also on sale for $15 in the gift shops of the Heritage Discovery Center and Johnstown Flood Museum; they are also available in JAHA’s online museum store. For every T-shirt sold, five dollars of the purchase price will go directly into the conservation fund. Visit the museum online at www.jaha.org . 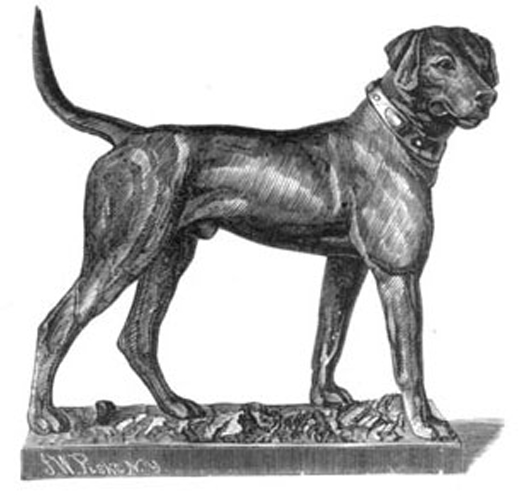 An engraving of the statue known as Morley’s Dog, as shown in a 19th-century J.W. Fiske product catalog.

Vintage Lawn Sprinklers: The Best Way to Cool Down This Summer?

No sale at auction of purported ‘Marilyn Monroe’ sex film