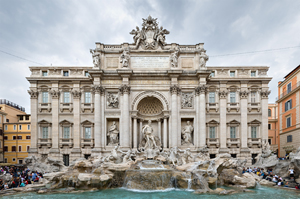 Trevi Fountain in Rome. Image by Diliff. This file is licensed under the Creative Commons Attribution 3.0 Unported license.

ROME (AFP) – Italian fashion house Fendi on Monday said it will finance a renovation of Rome’s Trevi Fountain, becoming the latest luxury group to fund repairs to priceless heritage in times of austerity.

“It’s a great idea, a great project. It is a symbol of Rome, like the Colosseum or St. Peter’s (Basilica),” Fendi’s creative director Karl Lagerfeld told a press conference.

The “Fendi for Fountains” project will also include funding to restore Quattro Fontane, late Renaissance fountains gracing each corner of a busy intersection which are blackened with soot.

Fendi, which was founded in Rome in the 1920s and is now part of French luxury giant LVMH, said it felt “a deep bond with the Eternal City.”

Under the deal with Rome city authorities, Fendi’s logo can be displayed on building site signs during the repairs and the company can hang a plaque near the monuments for four years after the completion.

There has been concern about the state of the Trevi Fountain, which is visited by millions of tourists every year, particularly after bits of its elaborate cornice began falling off last year following a particularly harsh winter.

Emergency repairs cost 320,000 euros, and a survey of the monument found more critical work was needed, prompting a cash-strapped city hall to appeal to large companies and donors for funding.

The Trevi Fountain was commissioned by Pope Clement XII in 1730 and is the end point of one of the ancient aqueducts that supplied Rome with water.

It famously featured in a scene of Federico Fellini’s iconic film La Dolce Vita in which Marcello Mastroianni and co-star Anita Ekberg share a kiss while wading through its pristine waters.

Tourists believe their luck will improve if they throw a coin into the fountain with their back turned to it.

The restoration comes after Diesel jeans founder Renzo Rosso took on the 5-million-euro cost of renovating the Rialto Bridge in Venice, and shoe billionaire Diego Della Valle has offered 25 million euros for a cleanup of the Colosseum.

Italy supports the injection of private funding to preserve heritage, but new laws allowing this have angered some conservationists who fear that the monuments will be used for advertising purposes. 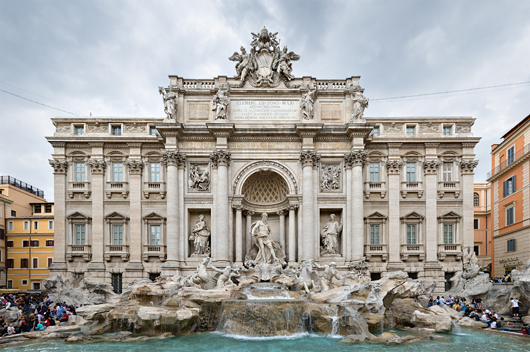 Trevi Fountain in Rome. Image by Diliff. This file is licensed under the Creative Commons Attribution 3.0 Unported license.