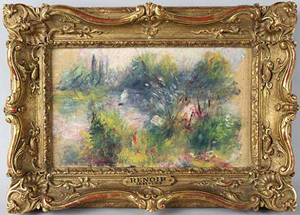 WASHINGTON (AFP) – A painting by Pierre-Auguste Renoir, bought for $7 at a flea market, is no longer up for auction this weekend after a US museum alleged it was stolen more than 60 years ago.

In a statement Thursday, auctioneers Potomack said it had checked the respected FBI and Art Lost Register lists of stolen art when “Paysage Bords de Seine” was consigned for sale last year.

The 19th century landscape had been acquired by an anonymous Virginia resident for $7 at a Shenandoah Valley flea market as part of a box lot that also included a plastic cow and a Paul Bunyan doll.

Potomack, based in the Washington suburb of Alexandria, Virginia, planned to auction the painting — with an estimated value of $75,000 to $100,000 — on Saturday. But then the Baltimore Museum of Art stepped into the picture, alerting the auctioneers Wednesday it had evidence that the small but vibrant painting had been stolen in 1951, although there is no police record of the theft.

The landscape had been loaned to the museum by Baltimore heiress Saidie May in 1937, 11 years after its acquisition by its last documented buyer, her former husband Henry May, from a Parisian art dealer.

“Potomack is relieved this came to light in a timely manner as we do not want to sell any item without clear title,” said Potomack’s proprietor Elizabeth Wainstein, who has alerted the Federal Bureau of Investigation.

“Our objective in conducting a sale is always to ensure fairness and finality both for the consignor and for the buying public. Postponing the sale of the Renoir painting is the best way of achieving that objective.”

Renoir, who died in 1919 at the age of 78, was a giant of the French Impressionist movement, and his paintings remain highly coveted by art collectors — and art thieves — worldwide.

Earlier this month the FBI added another Renoir, “Madeleine Leaning on Her Elbow with Flowers in Her Hair,” to its Top Ten Art Crimes list. Stolen from a Houston, Texas home in 2011, it is thought to be worth $1 million. 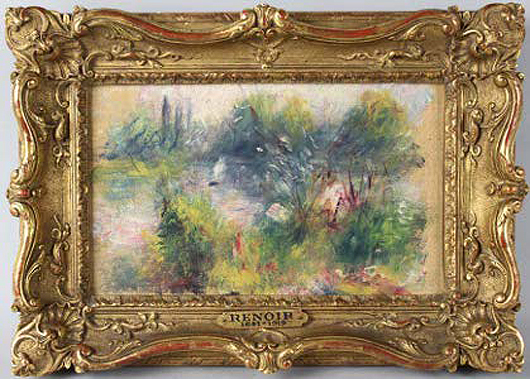