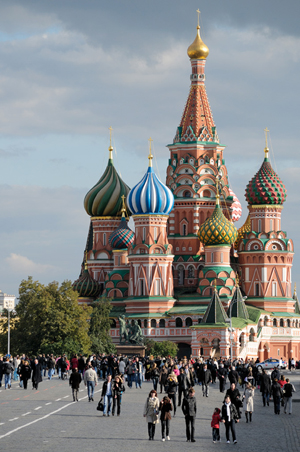 A masterpiece of Russian architecture: the Cathedral of Intercession of the Virgin on the Moat, also known as the Cathedral of Saint Basil the Blessed, on Red Square in Moscow. Photo by Christophe Meneboeuf, licensed under the Creative Commons Attribution-Share Alike 3.0 Unported license.

MOSCOW — Home to more billionaires than New York or London and with a thirst for art to match, Moscow is turning into a key pre-sale destination for auction houses with world masters on their hands.

London-based Christie’s and its US counterpart Sotheby’s first descended on Russia in the 1990s as interest in post-Soviet kitsch soared.

But Sotheby’s did not open its first dedicated office in the glitzy but risky and bureaucratic capital until 2007, while Christie’s waited for the global financial crisis to blow over before following suit in 2010.

Yet unlike most Western capitals, Russia’s holds an unparalleled concentration of the country’s super-rich, with the 78 Moscow billionaires last counted by Forbes magazine worth a combined $334 billion.

The money has grown so big — and the will to splash it around so prevalent — that the auction houses are now swallowing the costs involved in bringing their latest Dutch masters to Moscow for viewings ahead of auctions in London and New York.

“There is money in Moscow, that’s why Christie’s and Sotheby’s are putting in so much effort,” said Irina Kolosova, director of the Russian Institute of Art and Antiques Business.

In mid-April, Christie’s held a three-day viewing in an historic mansion that included works by Rembrandt, the contemporary British artist Damien Hirst and the Russian painter Pyotr Konchalovsky.

“We see Russian collectors participating in eight to ten percent of our global turnover,” spending as much as $5.7 billion on art in 2011, said Christie’s Russia director Matthew Stephenson.

Russians’ interest in the world’s most expensive paintings seemed to catch fire when oil prices first took off nearly a decade ago, flooding Moscow with petrodollars and displays of extravagant wealth.

“We really saw a surge in our sales (to Russians) after 2004, primarily of Russian art,” a phenomenon that helped return many masterpieces to their native country from all over the world, said Stephenson.

But Russian buyers are also showing a “rising interest in other regions, other cultures and works by foreign artists,” he added.

The tastes of Russia’s wealthy now seems to gravitate towards whatever is more expensive, said one art collector, with interest in minor artists dwindling at times when spenders have to slightly tighten their belts.

“Russian collectors buy it all. That’s not to say whatever is out there, but all of the best,” said collector Alexei Ustinov. “That includes Western paintings as well as the great masters of Russian art.”

He added that many viewed art as a great investment, particularly with the price gyrations experienced by Russia’s commodity exports in the past 10 years.

“On average, art increases in price by 15 to 20 percent a year,” said Ustinov. “That is not very likely to happen on any stock market or with any other type of investment.”

In a sign of a market picking up, Russian houses are also starting to auction off art for eyebrow-raising prices although the volume of their sales is still comparatively modest, said Kolosova, the Russian art institute head.

Moscow’s Leonid Shishkin Gallery made headlines a year ago by selling a Konchalovsky for 20.9 million rubles ($615,700). 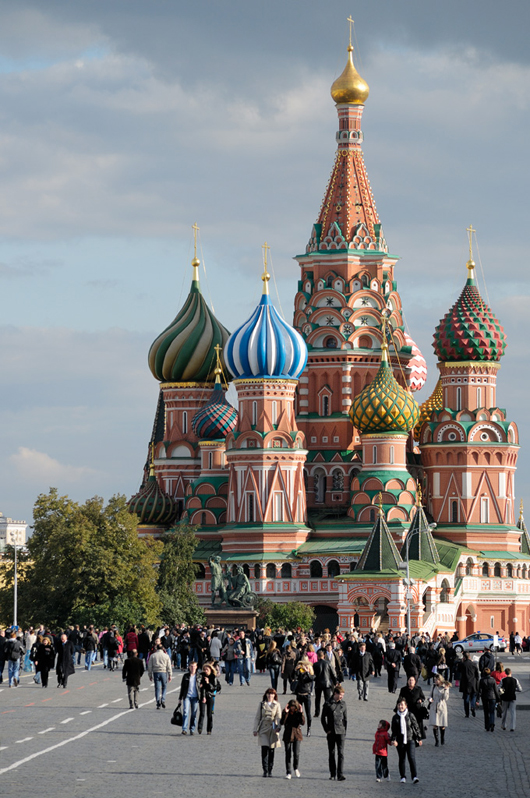 A masterpiece of Russian architecture: the Cathedral of Intercession of the Virgin on the Moat, also known as the Cathedral of Saint Basil the Blessed, on Red Square in Moscow. Photo by Christophe Meneboeuf, licensed under the Creative Commons Attribution-Share Alike 3.0 Unported license.