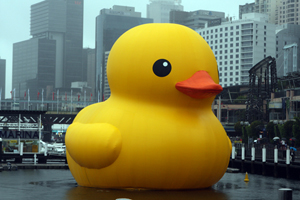 TAIPEI (AFP) – Taiwan’s second largest city has announced plans to display a larger version of the giant inflatable yellow duck that captivated Hong Kong — upstaging similar plans by another city on the island.

In a surprise announcement, the southern city of Kaohsiung said an 18-meter-tall (59-foot) version of the duck created by Dutch artist Florentijn Hofman will go on show for a month, beginning September.

This will be around three months earlier than the start of a similar duck exhibit planned by Keelung, a port city in the north bordering the capital Taipei.

Keelung announced last month it had signed an agreement with Hofman to create its own duck, also 18 meters tall, for public display around mid-December.

“I don’t want to compare Keelung with other cities,” Huang told AFP. “The yellow duck represents welfare, happiness and peace. By introducing it to the city, I hope it can bring our citizens the feeling of happiness.”

Kaohsiung city’s government, which announced its move Monday, insisted that it had signed a memorandum with Hofman in June, a month ahead of Keelung.

“We’ve kept our promise not to make the announcement until Mr Hofman came to Taiwan to sign the full contract,” Zeno Lai, the head of the city government’s information bureau, told AFP.

Lai said a total of 23 Taiwanese cities or groups had approached Hofman asking to display his duck.

“Throughout, we had been the leader and the first to sign the deal with Hofman,” said Lai.

He estimated that the duck would draw three million visits and generate business worth Tw$1 billion ($33.3 million), given Hong Kong’s experience.

Residents there cheered when a 16.5 metre duck took to the waters of Hong Kong harbor in May.

The cheerful giant bath toy replica touched off a craze in Hong Kong. Shops sold numerous models of it, restaurants created special duck dishes and thousands turned out to admire the artwork.

Taiwanese travel agencies got into the act by touting “visiting yellow duck” trips to Hong Kong, while copies appeared in several cities in mainland China.

Since 2007 the original duck has travelled to 13 different cities in nine countries ranging from Brazil to Australia in its journey around the world.

Hofman has said he hopes it will act as a “catalyst” to connect people to public art.

According to Lai, both Kaohsiung and Keelung will be able to keep their own versions of the duck, but will have to pay extra royalties to Hofman for any subsequent displays. 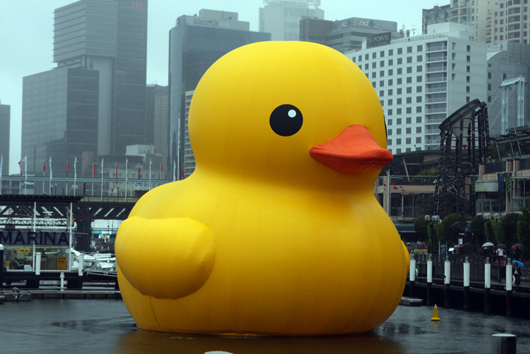 Sydney arts festival celebrates summer in the city Down Under