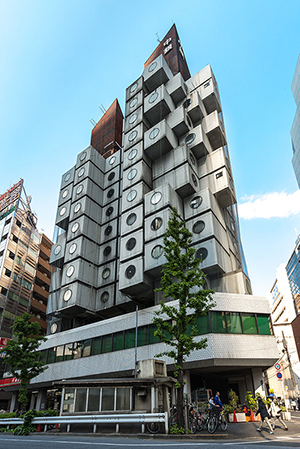 The Nakagin Capsule Tower in Tokyo. Image by Jordy Meow. This file is licensed under the Attribution-ShareAlike 3.0 Unported license.

TOKYO (AFP) – Every night in Tokyo, the few remaining residents of the Nakagin Capsule Tower bed down to sleep in the once-futuristic white pods they call home.

Unlike the tiny, coffin-like cabins of Japan’s numerous capsule hotels, where office workers who have missed the last train can catch a few hours’ sleep, the 140 units at Nakagin represent a special part of the history of architecture, and one that is worth protecting against plans to tear it down, say campaigners.

“We’re going to collect donations from all over the world. We’re trying to buy each capsule one by one. Each room counts as one vote, to decide what to do,” said Masato Abe, founder of the Save Nakagin Capsule Tower Project.

The funky-looking tower, designed by architect Kisho Kurokawa in 1972, appeared as a Japanese love hotel in 2013 blockbuster The Wolverine starring Hugh Jackman.

In real life, around half of the capsules are currently in use as second homes, offices and art studios, but some 20 of the tiny spaces are full-time homes.

A bed, foldout desk and even a bathroom unit are squeezed into the boxes, which have a floor space of just 10 square meters (108 square feet).

The compact rooms’ large round window and in-built ’70s features such as retro clocks and sound systems give them the appearance of being suspended in yesteryear’s vision of the future.

Portuguese architects Ana Luisa Soares and Filipe Magalhães, who shared a capsule for one year, said it was “amazing” to live in Tokyo’s Shimbashi district, a crowded part of town that throbs with late-night noise.

However, the building’s deteriorating state did not make for an easy life.

“The capsules’ asbestos insulation wasn’t really working anymore, so during the winter it was really cold, and during the summer really hot,” they said.

Corroding pipes, serious water damage and an uncertain future mean half the capsules have been left to rot by their owners, who would rather see the tower demolished and reap the profits of a brand new apartment building.

Yet the wrecking ball can only come out if at least 80 percent of owners vote for demolition, said Tatsuyuki Maeda, who owns seven capsules that he is refurbishing at weekends with plans to rent them.

The tower came close to demolition in 2007 when enough owners voted in favor of its destruction, despite a petition and Kurokawa’s own negotiations with the Nakagin real estate company to save his building.

But the global financial crisis put paid to plans for redevelopment and although Kurokawa died at the end of 2007, the campaign has been revived.

Several capsules have since changed hands and new owners like Maeda have a genuine interest in the tower’s survival.

“There are still talks about demolition,” but Kurokawa’s office are also discussing a “large-scale repair” of the building, he said.

However the stalemate looks set to continue.

“Right now, there are no ways to preserve the building at a reasonable maintenance cost, but the property cannot be destroyed without approval from at least four-fifths of owners,” a statement from Nakagin said.

In the meantime, various projects are giving the tower a new lease on life.

Abe moved out of his capsule when the hot water was shut off in 2010 but now rents it out to guests for 9,000 yen (around $80) a night through DIY hotel site Airbnb.

Artist Takami Sugawara has turned her capsule bedroom into a giant pinhole camera by blocking out light from the circular window, leaving a tiny hole which projects an upside-down image of the outside world onto the walls.

Christian Dimmer, professor of Urbanism at Tokyo University, said Kurokawa’s tower is an example of architecture from the postwar Metabolist movement, which aimed to create sustainable, renewable living spaces that people could take with them if they moved.

The capsules were designed to be individually removed and replaced every 25 years, although that didn’t happen.

“The zeitgeist of metabolism is frozen, literally encapsulated in this building,” he told AFP.

It is hard to raise public awareness about the preservation of historic buildings in Japan, where buildings are usually torn down and replaced after 30 years, he said.

If it can’t be preserved through the crowdfunding campaign set up by Masato Abe, Dimmer suggests the tower could be taken apart and the capsules sent around the world to honor Kurokawa’s Metabolist ideals.

It could serve as a template for how to “live more compactly, more sustainably and have a happy life with less,” he said.

The Nakagin Capsule Tower in Tokyo. Image by Jordy Meow. This file is licensed under the Attribution-ShareAlike 3.0 Unported license.