BATH, England (AP) – Yes, there really is a natural hot spring beneath the city of Bath, but soaking in the above-ground sights and sounds will leave you plenty relaxed. With its Georgian brick buildings and lush green hills, almost everywhere in Bath feels like a living postcard. With landmarks from Roman and medieval times, you may feel you’ve landed back in time, but the juxtaposition of stately terraced houses and people hustling about on smartphones brings you out of that fantasy.

Bath somehow weaves together threads of small-town life with cosmopolitan sophistication. It has galleries, museums and theaters. It’s a college town anchored by the University of Bath. And it is a UNESCO World Heritage site. Even on a mere day trip from London, just 90 minutes away by train, Bath bubbles over with charm.

A majestic landmark in the center of town, Bath Abbey is the third place of worship to occupy this site in 1,200 years. The first church, built in 757, was replaced by a cathedral soon after the Norman conquest of England in 1066. That one gave way in the 15th century to the abbey that’s there today.

You might say the Romans were the first in Western Europe to come up with the spa weekend. The Roman Baths date back to the year 70, with a sprawling pool of natural, hot spring water called the Great Bath located below street level. You can see the steam swirling from a terrace on the street above. People dressed in period clothing – such as a Roman soldier or stone mason – stand in the archways. The complex includes several underground spaces and displays. The self-guided audio tour, which includes commentary from writer Bill Bryson, thoroughly explains how the citizens of Aquae Sulis (the Roman name given to Bath) socialized, worked and worshipped. At the end of the tour, visitors can sample some of that rejuvenating water.

Novelist Jane Austen lived with family in Bath between 1801 and 1806. Avid readers of Austen’s work know that Bath was a prominent setting in two of her books, Persuasion and Northanger Abbey. But even fans only familiar with the movie adaptations will geek out inside the Jane Austen Center. The three-story building on Gay Street has a permanent exhibit and tea room. The experience reaches delightfully Austentatious levels with employees clad in period clothing giving brief orientations on the novelist.

The exhibit offers two floors of clothes, knickknacks and anecdotes about what daily life would have been like for Austen in Bath. You can end your wandering with afternoon tea in the third-floor Regency Tea Room, where a portrait of Colin Firth’s Mr. Darcy looms over patrons. If you are an Austen lover, good luck holding back in the gift shop where merchandise includes items branded with “I heart Mr. Darcy.” The center also helps stage several events such the annual Jane Austen Festival in September. For 10 days, hundreds of visitors overtake the city for Austen-themed readings, workshops and, of course, a ball.

This half-moon formation of Georgian townhouses is one of Bath’s most famous architectural masterpieces, an arc-shaped cluster of buildings set behind a green field. The first home, No. 1 Royal Crescent, where former Parliament member Henry Sanford lived in the late 1700s, is also a museum. Rooms are furnished in 18th century style, with a glimpse of the upstairs-downstairs lifestyle of the era (think Downton Abbey but 150 years earlier). Rooms to see include the scullery, parlor and gentleman’s retreat. Don’t miss the servants’ hall, where you can see a replica of a dog wheel where a running canine actually powered a cooking spit.

Every alley off the cobblestoned streets seems to be lined with adorable shop windows. But to truly appreciate the villages and fields that surround Bath, a stroll along the canal is the way to go.

You can access the path from Sydney Gardens in the town center. In a 30-minute walk, you’ll see flower-filled backyards and stretches of bright green grass, all perfectly reflected in the still water, as locals jog by and walk their dogs. There are even sheep nibbling off in the fields. And it doesn’t hurt that you will pass a pub or two along the way.

Copyright 2015 Associated Press. All rights reserved. This material may not be published, broadcast, rewritten or redistributed. 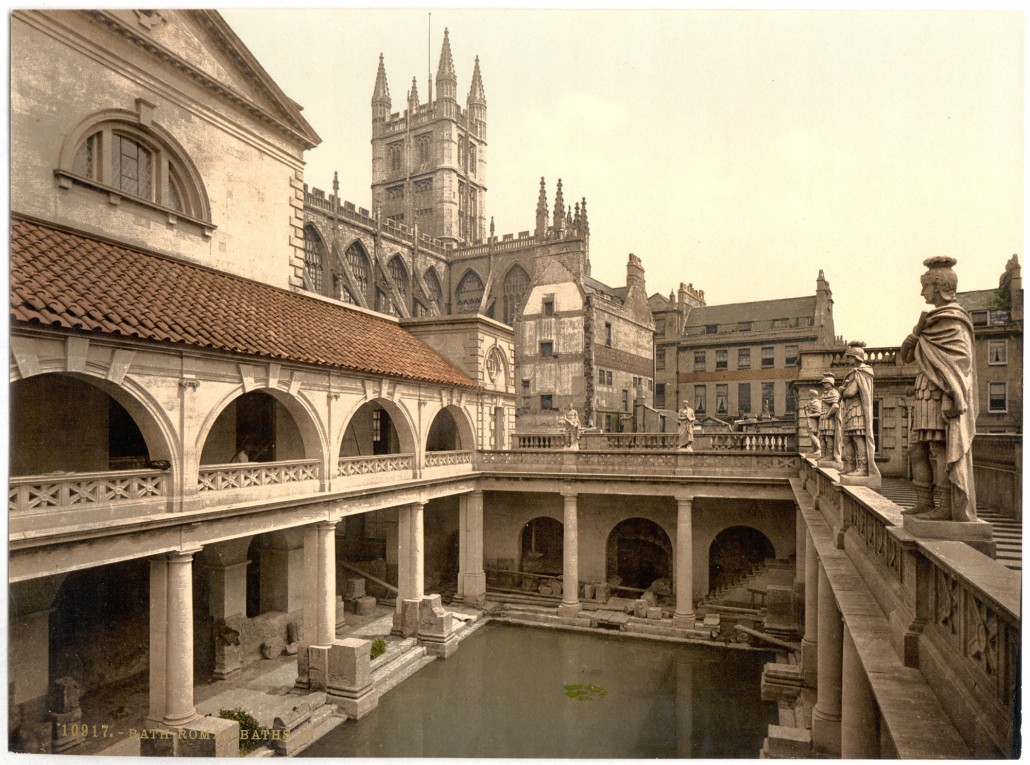 A turn of the 20th century photochrom of the Roman Baths in Bath, England. Image courtesy of Wikimedia Commons.

Gazan duped into selling Banksy artwork for $180
Scroll to top