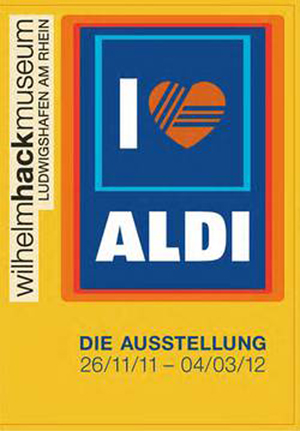 Exhibition poster for the ‘I Love Aldi’ exhibition at WilhelmHack museum in Ludwigshafen, Germany. Image courtesy of the museum.

These installations are not classic art exhibit fodder but part of a modern art display at a German museum exploring discount culture, as pioneered by supermarket giants such as Aldi.

The exhibition, “I Love Aldi,” runs at the WilhelmHack museum in the western industrial city of Ludwigshafen, situated on the banks of the Rhine, until March 4.

“The ‘Aldi-isation’, or the search for low cost, has long since become a social phenomenon which has swept through all social classes and companies,” said museum director Reinhard Spieler.

“It’s a very German phenomenon, especially for food. The Germans are among those in Europe who spend the least on food and the competition in this market is very stiff.”

The exhibition evokes the Pop Art and Fluxus movements which in the 1960s raised questions about art and mass industrial production and blurred the line between the two.

The exhibition challenges consumerism with objects such as a giant shopping trolley, which could be seen as a celebration of the shopper’s purchasing power or as threatening to squash the consumer.

Aldi itself reached out to the art world in its own way in 2003 and 2004 when it sold in its German stores reproductions of paintings by renowned artists — on bread rolls.