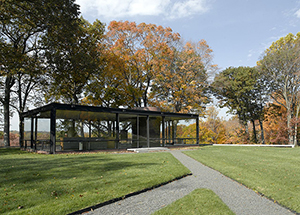 NEW CANAAN, Conn. (AP) – The Glass House, architect Philip Johnson’s iconic Modernist structure set in the woods here, has been wrapped in a poetic fog by Japanese artist Fujiko Nakaya, a sort of Christo of mist.

Like the glass structure itself, Nakaya’s Veil installation plays on the transparent and opaque, the permanent and ephemeral.

“I’m making an invisible natural phenomenon visible,” explained the Tokyo-based artist. “Usually, you ignore all the dynamics in the air. People go around the world to view an eclipse so they can experience a natural phenomenon that usually can’t be seen. But you don’t have to go that far.”

Dense fog gushes forth from 600 specially designed nozzles around the Glass House for around 10 minutes at a time. Using meteorological studies of the site, Nakaya carefully timed and calibrated the nozzles to maximize the visual effects of wind, humidity and air pressure.

For about half an hour, the thick mist dances gently around and over the house, sometimes enveloping it completely. At times, the mist cascades into the wooded valley below, and at times it floats up toward the hillside above, making parts of the house and landscape briefly disappear while usually invisible atmospheric forces come into focus.

“Johnson’s interest in the balance of opposites is evident throughout the Glass House campus. With Nakaya’s temporary installation, we carry this sensibility to its endpoint while allowing the unique magic of the Glass House – the dream of transparency, an architecture that vanishes – to return again and again as the fog rises and falls,” said Glass House director Henry Urbach.

The installation, about an hour’s train ride north of New York City, is open to the public from May 1 to Nov. 30. It is part of a larger effort by Urbach, who was architecture curator at the San Francisco Museum of Modern Art before taking the helm of the Glass House in 2012, to foster new interpretations of the historic site.

Other new initiatives include overnights in the Glass House; performances, readings and art exhibitions on the grounds; self-guided tours; and commissioned works, such as this one, that engage the house itself.

Johnson’s home in New Canaan, a village including almost 100 important Modernist structures, was a center of art and architecture, particularly during the `50s and `60s. Built in 1949, the Glass House was home to Johnson and his partner, art dealer David Whitney, until 2005.

Johnson was the first curator of the Museum of Modern Art’s architecture department, and a friend and associate of Alfred Barr, the founding director of MoMA. Cutting-edge artworks and architectural concepts were often debuted at the Glass House before being exhibited in Manhattan.

Veil is Nakaya’s first major work on the East Coast. From inside the silent sleekness of the Glass House, being enveloped by undulating fog feels at times like being inside a sort of three-dimensional time-lapse movie. From outside the house, or from the hillsides below or above the structure, the impact of the installation is completely different, and it’s ever flowing and changing depending on the weather.

“I look for the very best stage for the fog to perform. Then it’s at the mercy of the wind,” explained Nakaya, whose father, Ukichiro Nakaya, was a physicist credited with making the first artificial snowflakes. She started out painting clouds before experimenting with fog.

“I wanted only water, no chemicals, and a nozzle that could make extremely tiny droplets,” she said. After extensive research, she found a California cloud scientist, Thomas Mee, trying to produce fog to help protect crops from early frost. Although she said the chemical-free fog nozzle system proved too expensive for agricultural use, Nakaya has been using a version of it for decades to produce her fogscapes.

Her first fog installation was in 1970 at the Osaka World Expo, where she enveloped the Pepsi Pavilion in dense fog in collaboration with the avant-garde artists’ collaborative Experiments in Art and Technology (E.A.T.), founded by artist Robert Rauschenberg and Bell Labs engineer Billy Kluver.

Nakaya’s over 50 fog installations have appeared at the Guggenheim Museum in Bilbao, emerged from fountains at the Grand Palais in Paris and cascaded from bridges around the world. She has collaborated with Rauschenberg and other artists on dramatic fog performances and stage sets. Her only previous fogscape in New York, in 1980, was much smaller, at Johnson’s apartment in lower Manhattan. She also showed a fog sculpture in Washington, D.C., 30 years ago, she said.

The 49-acre Glass House grounds, a National Trust Historic Site, also feature Modernist outdoor sculptures, a brick house (designed as a counterpoint to the glass one), two art galleries (one of which resembles a grass-covered nuclear bomb shelter), a small Modernist swimming pool, and a Greek-style Neo-Classical pavilion, made of cast concrete with a ceiling once gilded in gold, floating on a pond.

Shuttles to the grounds depart from the Glass House’s offices across from the New Canaan train station. Tickets must be purchased in advance. Guided and self-guided tours are available. The Glass House is closed on Tuesdays and Wednesdays. 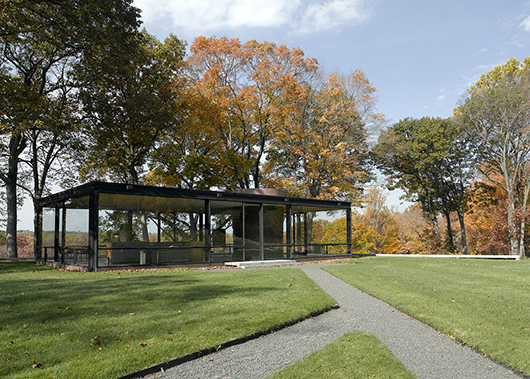 Glass-walled labyrinth to be installed at Kansas City museum