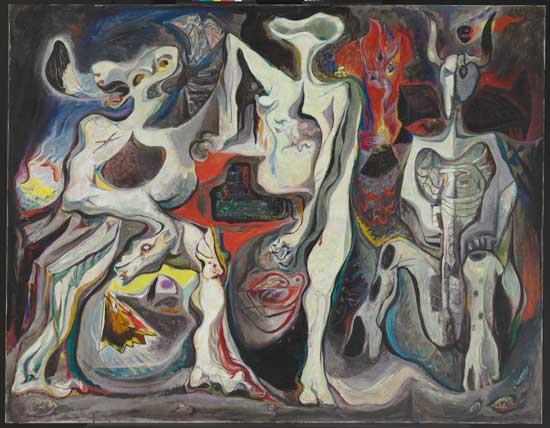 BALTIMORE (AP) – A gesture as simple as writing a check can have heroic consequences.

The $900 that the Baltimore heiress and art patron Saidie Adler May filled out represents a modest sum, even viewed from the perspective of 1940. It’s the equivalent of $16,150 in 2019 dollars, or roughly the amount needed to buy a late-model used car. But it was enough to possibly save four people from the Nazis.

May’s $900 donation purchased boat passage during World War II from occupied France to the U.S. for the major Surrealist painter Andre Masson; his wife, Rose; and their young sons, Diego and Luis. Rose Masson and the boys were Jewish; Andre Masson’s art had been condemned by the Nazis as degenerate.

“It’s kind of an astonishing story,” said Oliver Shell, the Baltimore Museum of Art’s associate curator of European art. “There was a mainly American rescue committee that was trying to get artists and intellectuals out of Europe. Many of them got over here at the last moment, and Masson was one of them.”

The result of May’s generosity – she supported the young family during the five years they spent in the U.S. before returning to Europe by making frequent purchases of Masson’s paintings – is reflected in part in “Monsters & Myths: Surrealism and War in the 1930s and 1940s,” the impressive and intentionally disquieting ticketed exhibition opening Sunday at the heiress’ hometown museum. This 90-work show is chock full of modern masters: Pablo Picasso, Salvador Dali, Max Ernst, Joan Miro, Jackson Pollock and Mark Rothko. There are even two short black-and-white films running in a continuous loop, including Luis Bunuel’s Un Chien Andalou (An Andalusian Dog).

Though about three-quarters of this show is drawn from the BMA’s collection, many pieces will be unfamiliar to local art lovers. About 20 are on loan from other museums, and some major works owned by the Baltimore museum (such as a handful of Picasso etchings on paper) are rarely displayed, Shell said, because they’re fragile.

“Monsters and Myths” debuted at Connecticut’s Wadsworth Atheneum Museum of Art last fall. After leaving Baltimore in May, it will travel to Nashville’s Frist Museum.

Shell said the Surrealist movement was an outgrowth of the growing realization among intellectuals that the carnage inflicted during World War I had not brought about lasting peace. The Spanish Civil War loomed and in Germany, Adolf Hitler had begun his rise to power. Many of the paintings created during those decades have an anguished, nightmarish quality. They were the artists’ way of sounding the alarms, of trying to rouse the populace to take up arms and fight back.

“Nationalism was on the rise,” said Shell, who co-curated the show with a colleague from the Wadsworth. “The artists were very despondent at encountering dictators and other real-life monsters. Some of the images they created are very disturbed.”

The human body is a recurring motif, but it’s rarely depicted whole or without grotesque distortion. Many torsos lack heads, reflecting the artists’ belief that they were living in irrational times, Shell said.

The female praying mantis, who bites off the head of her mate during sex, appears almost as often in these artworks as the Minotaur, a fictitious beast that was half man and half bull and that devoured human sacrifices. (If visitors to the Surrealism show find themselves lost and feeling a bit trapped, that’s no accident; the galleries have been reconfigured to resemble the maze in which the Minotaur of Greek mythology hunted his prey.)

“This is a show about the psychology of evil,” Shell said, “where it lives and how it thrives and how to expunge it. But though art in dark times is the overarching theme of this show, we also wanted to highlight the brilliance and resilience of the people who despite personal hazards continued to work as artists.”

Ernst, for instance, fought on the side of Germany in World War I but emerged from the trenches to protest nationalism. Dali’s close friend from school was the great Spanish playwright Federico Garcia Lorca, who was murdered by the Fascists in 1936.

Masson had, if possible, an even more horrific wartime experience. He served in the French army during World War I and during one battle north of Paris, was shot in the chest and gravely wounded. Rescuers were unable to reach him, Shell said, and Masson spent the night half-dead on the battlefield.

On view in “Monsters & Myths” is a painting by Masson called In the Tower of Sleep that is crammed so full of images that evoke physical pain that it is difficult to examine closely.

Here, a giant eyeball is being pierced. There, the nipples on a woman’s bared breasts drip blood. In the center, viewers seem to be gazing down from above upon a flayed man with his muscles and internal organs exposed. His clump of dark hair is bisected by a bright yellow triangle containing red seeds. Masson later described it as a drawing of “a head split open like a pomegranate” – an image that echoes words he had written previously about his experience with trench warfare.

“This is a show that makes monstrousness very personal,” museum director Christopher Bedford said. “It’s a difficult thing to reckon with the idea that human beings were responsible for World War I and World War II. These were human decisions that were made by specific individuals.”

Some of the Surrealists were candid enough and brave enough to locate the roots of violence not merely in the visages of dictators but in their own mirrors.

For example, in Picasso’s Minotauromachy, the rampaging Minotaur bullies his way into the canvas from the right, trampling all in his path. Everyone flees in panic – except the little girl in the front left of the canvas, holding a bouquet of flowers in one hand and a lighted candle in the other.

Shell notes that Picasso often used the Minotaur as his alter ego. Moreover, the wounded young bullfighter on horseback has the same face as the artist’s pregnant young mistress, Marie-Therese Walter. Some viewers might interpret this painting as a confession or even an apology; the artist is accepting responsibility for the turmoil he created in his household and for the destruction he left in his wake.

But though the Baltimore museum owns a formidable collection of acknowledged Surrealist masterpieces, Shell said that one major artist – Ernst – is underrepresented. So the curator set about borrowing several important paintings by the pioneering German, including the large-scale Europe after the Rain II.

When World War II broke out, Ernst was living illegally in France and his situation was precarious, Shell said. Deemed an “undesirable foreigner,” Ernst was sent to several internment camps before fleeing to the U.S. in 1941. He eventually made his home in comparatively peaceful Arizona.

Contrary to most Western civilization artworks, Europe after the Rain II tells its story from right to left – or more precisely, from east to west. The rock formations on the right are hollow, twisted, desiccated, littered with animal skulls. The nude figure of a woman next to a bull, Shell said, alludes to the mythological story of the rape of Europa by Zeus, who took the form of a bull for the assault. Europa was also the mother of King Minos, who confined the Minotaur to the labyrinth.

As viewers’ gazes move left, the forms become noticeably simpler, more harmonious and majestic. The mountain formations at the western edge on the canvas reflect the coloration at different times of the day of the famous red rocks of Sedona, where Ernst lived with his wife, the Surrealist painter Dorothea Tanning. The artist couldn’t be more clearly expressing his opinion that the U.S. was the promised land.

Masson and his family returned to Europe in 1946, but he also seems to have benefited from his time on this side of the Atlantic. The first retrospective of his work in the U.S. – a significant career milestone – was held at the Baltimore Museum of Art in 1941.

And though the artworks that Masson began painting in Connecticut might include occasional monsters, his canvases were no longer were dominated by the demons.

For instance, Masson’s 1942 painting Germination is an explosion of primary colors inspired by the plant and wildlife around his home in New England. There’s a blue moon surrounded by a yellow sky, the beak of a bird, a fat fish.

Copyright 2019 Associated Press. All rights reserved. This material may not be published, broadcast, rewritten, or redistributed.Information from: The Baltimore Sun, http://www.baltimoresun.com