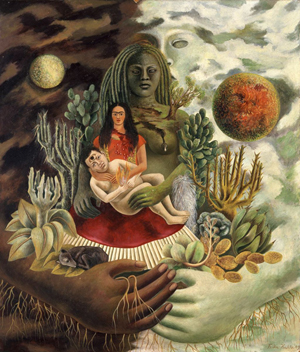 ATLANTA (AP) – A major exhibition opening in Atlanta explores the work of Diego Rivera and Frida Kahlo, the famed 20th century couple who shared influences ranging from Marxism to Mexican folk art but whose legacies could not be more different – her best-known work consisting of dramatic self-portraits, his celebrity stemming from public murals celebrating Mexican nationalism.

“Frida & Diego: Passion, Politics, and Painting” opened Thursday at the High Museum of Art in Atlanta, the only U.S. venue where it will be shown. Featuring more than 120 pieces, it is the largest exhibition ever of the husband-and-wife’s work shown together and includes about a quarter of Kahlo’s total body of work, according to the High.

Rivera and Kahlo were married for nearly 25 years – a union that was both passionate and tumultuous – but their art is rarely shown together in a single exhibition because of the perceived differences in their styles, said curator Elliott King.

By the time the two married in 1929, Rivera was already established as a creative figure, perhaps best-known for more than 200 public murals that depict scenes from Mexican history to promote cultural nationalism commissioned by the Ministry of Education. His outgoing personality added to his celebrity.

Kahlo was virtually unknown as an artist when the two met. She had suffered numerous broken bones – including a spine fractured in three places, a broken pelvis and broken collar bone – in a 1925 bus accident that also left her unable to have children. She was very private and used her small-format painting to channel her physical and emotional suffering.

Immediately upon entering the exhibition, the visitor encounters a blown-up larger-than-life photograph of the pair – Kahlo looking off to one side as Rivera, who’s right behind her, stares over Kahlo’s shoulder straight at the camera.

“I think one of the things that is most compelling about this exhibition is the story of these two people, and we really thought this photograph captures that,” said High director of collections and exhibitions David Brenneman.

In a small gallery right behind that photograph are self-portraits by each of them and a Kahlo portrait of Rivera.

The exhibition is organized more or less chronologically, so that the early part is dominated by Rivera, who was 20 years older than Kahlo. He lived in Europe from 1907 through 1921, beginning in Spain and then moving on to Paris. During that time he befriended many famous artists – including Pablo Picasso, Georges Braque, Amedeo Modigliani and Henri Matisse. In Europe, he experimented with cubism and a Paul Cezanne-inspired post-Impressionist style before reverting to a realist approach that was closer to his roots.

The exhibition then moves on to Rivera’s return to Mexico, which had been greatly transformed during his absence by the Mexican Revolution. In his public mural project, he drew on indigenous and popular folk traditions. Since those murals can’t be moved, the High included two reproductions in the exhibition to overcome one of what King, the curator, called one of the exhibition’s greatest challenges.

The Arsenal is one of the murals reproduced in large format in the exhibition. From a series of murals featuring the education of rural workers on the ideals of Marxist ideology, it shows Kahlo handing out arms to workers.

“I don’t think you get the grandeur of Diego without the murals,” King said, adding that the obstacle also provided an opportunity to showcase a small selection of Rivera’s more than 1,000 oil paintings.

“Even though he’s most known for his murals, I think he’s also a really great oil painter, so I think it’s actually kind of refreshing to let people see him this way,” King said.

Many of Rivera’s oil paintings depict ordinary people, often rural workers, in everyday settings. In Calla Lily Vendor, two young women kneel in front of a large bouquet of the sensual white flowers – a favorite motif for the painter – with only the vendor’s hat and hands visible.

It’s at this point in the exhibition, after the murals, that Kahlo’s presence really begins to be felt, which echoes her entry into Rivera’s life.

Shortly after marrying, the couple lived for three years in the U.S., where Rivera was commissioned to paint murals in San Francisco, Detroit and New York. He reveled in his celebrity status but Kahlo was homesick and less impressed by the industrialism and technological progress in the U.S. One piece from that time, which is the only collage she’s known to have made, conveys her feelings, focusing on social decay, pollution and long unemployment lines.

In a gallery titled “The Vulnerable Body,” the High groups some of Kahlo’s powerful images of damaged female bodies, including Henry Ford Hospital, which features her own naked form on a bloody bed following a miscarriage that happened while they lived in Detroit. The next room features Kahlo’s still-life paintings, which aren’t as well-known as her self-portraits, though they make up a big part of her total body of work.

Near the very end of the exhibition is a wall with seven of Kahlo’s famous and moving self-portraits. In The Broken Column, her torso is split open, showing the spine broken by her accident, her body held together by straps and the skin all over her body pricked with nails as tears flow from her eyes.

The final gallery features photographs of Kahlo and Rivera: the two of them at home, Kahlo working in her studio and the pair of them attending a political rally. It gives the visitor a final glimpse through photographs into the shared lives of the two artists whose lives were inextricably and tumultuously linked. 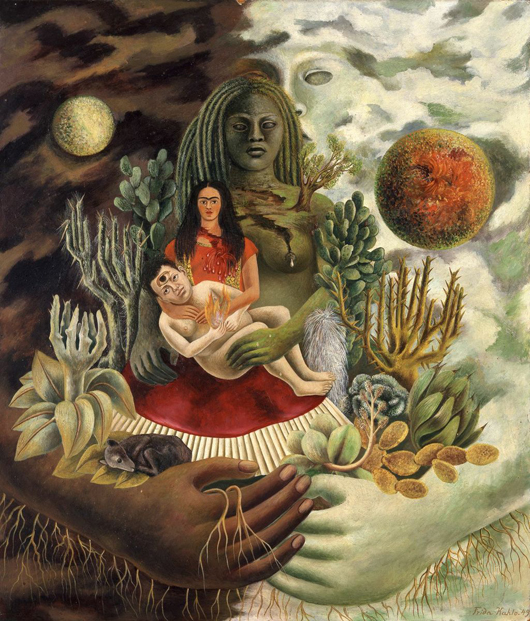 Vermeer painting to go on display at Getty in Los Angeles