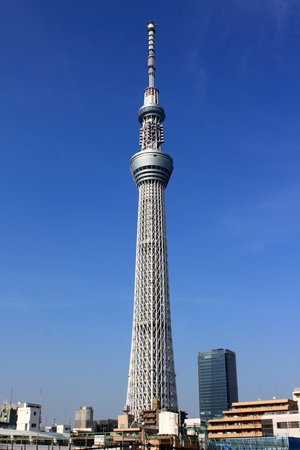 The 2,080-foot-tall Tokyo Skytree. It stands taller than the 1,968-foot-tall Canton Tower in the southern Chinese city of Guangzhou and the 1,748-foot-tall CN Tower in Toronto. Image by Kakidai. This file is licensed under the Creative Commons Attribution-Share Alike 3.0 Unported license.

TOKYO (AFP) – Strong winds forced the operators of the Tokyo Skytree, the world’s tallest tower, to shut down its lifts on its opening day Tuesday, leaving some visitors stranded on a 1,475-foot-high observation deck.

Tens of thousands of people had flocked to the 2,080-foot tower as the Japanese capital’s newest attraction opened to the public for the first time, hoping to catch the spectacular views from the top.

The glitch occurred at around 6 p.m., when the attraction’s operators decided to shut down two lifts linking an observation deck at 1,148 feet with another at 1,475 feet for around 30 minutes due to safety concerns.

Skytree spokeswoman Maki Yamazaki was unable to say how many of the tens of thousands of visitors were affected by the closure, adding that all were later able to return to the lower level once the lift service resumed.

Rainy weather also put a damper on the proceedings, with visitors saying they were unable to enjoy the tower’s far-stretching views.

“I have long been looking forward to coming here,” said Ayumi Nakazawa, who won tickets to the opening ceremony of the tower, which ranks as the world’s second-tallest structure.

“I can’t see the view (because of the rain), but it was exciting,” Nakazawa told reporters after becoming the first official visitor to the observation deck.

Japan’s hard-hit tourism sector is hoping the tower will boost the number of visitors from abroad after figures plummeted in the wake of Japan’s quake-tsunami disaster last year.

The disaster, which sparked the worst nuclear crisis in a generation, saw the number of visitors to Japan fall 27.8 percent from the previous year to 6.22 million, according to the Japan National Tourist Organization.

Amid safety concerns, the tower’s operator said Tokyo Skytree was equipped with state-of-art technology to counter the earth tremors that regularly shake Japan, one of the world’s most seismically active nations.

The Tokyo Skytree is the world’s second-tallest manmade structure, topped only by the 2,716-foot Burj Khalifa in Dubai.

In Japan’s capital the Tokyo Skytree overshadows landmarks in the upscale western district including the 1,092-foot Tokyo Tower, which was built in 1958 and became a byword for the country’s rapid postwar growth. 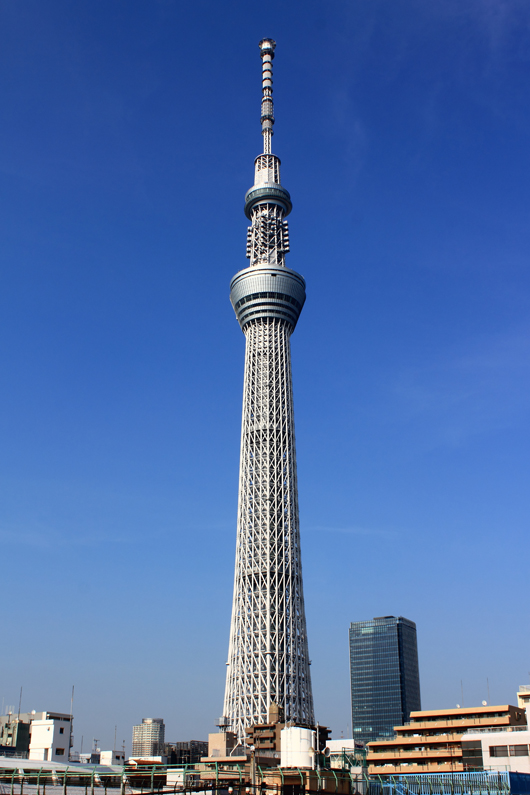 The 2,080-foot-tall Tokyo Skytree. It stands taller than the 1,968-foot-tall Canton Tower in the southern Chinese city of Guangzhou and the 1,748-foot-tall CN Tower in Toronto. Image by Kakidai. This file is licensed under the Creative Commons Attribution-Share Alike 3.0 Unported license.

Futuristic Tokyo tower may become thing of the past