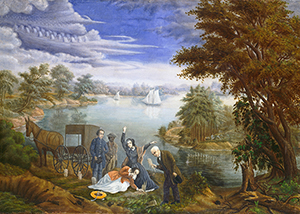 The painting by Linton Park (1826-1906) formerly know as ‘The Burial’ is now named ‘The Exhumation.’ Image courtesy National Gallery of Art, gift of Edgar William and Bernice Chrysler Garbisch.

That doesn’t mean he’s searching for secret codes. Rather, he studies images and ferrets out the meaning behind them that would have been apparent to viewers at the time they were painted, but might be lost on a viewer today.

His research recently prompted the National Gallery of Art in Washington, D.C., to change the name of a work in its collection. For decades, the museum referred to an 1890 oil painting by American artist Linton Park as The Burial. The name seemed to make sense, as the piece depicts people mourning at a grave, with a Union soldier and a man holding a shovel looking on.

Yet Crawford, 45, argued to the museum that the title didn’t fit. Based on what he deduced about what the painting depicts, he suggested it should be called The Exhumation.

“We carefully considered the research that historian B. Scott Crawford brought to us,” wrote Anabeth Guthrie, deputy press officer for the National Gallery of Art, in an email. “Our curators in the department of American and British paintings reviewed the research and citations as well as the painting and decided that he had made a solid case for a title change.”

The National Gallery now calls the painting The Exhumation. Needless to say, Crawford’s excited about being vindicated.

An adjunct instructor at Virginia Tech and Virginia Western Community College, Crawford has worked as deputy director of education at the Taubman Museum of Art. He left the museum in 2009 and works now as vice president of business development and member education at Member One Federal Credit Union.

While he worked at the Taubman, he developed an intense interest in a painting in the museum’s American art collection. At first glance, Jane Eleanor Sherman Lacey and Her Son Edward by Lilly Martin Spencer, an 1860 portrait of a mother and son, seems to be the equivalent of a happy family snapshot.

Yet based on his studies of the 19th-century culture of death and mourning, Crawford noticed symbols and objects that he believed indicated the painting was a memorial rather than a live portrait. He delved into the painting’s history and ultimately confirmed that both mother and son had died years before Spencer painted them.

When he taught at Radford University, he used a slide of The Burial when discussing the American frontier in 1890, even though it had nothing to do with the theme. As he researched the Spencer painting, he decided to also give the Park painting a second look, and realized it showed something altogether different from a burial.

The federal government created national cemeteries after the Civil War, and it was common for the families of Union soldiers who died to reclaim their dead and bring them to such cemeteries for reburial.

Crawford concluded that the broken gravestone, the overgrown grave and the clothes of the mourners indicate the slain soldier had been buried for some time, and that the party has come to reclaim his body.

He spoke with excitement about visiting the National Gallery and getting to go back into the vaults, where he could look at the painting up close and also read the thesis that led the museum to name the painting The Burial after acquiring it in 1953. He believes the painting described in the thesis isn’t the same one the museum has in its collection.

He submitted his argument for a name change in 2011. In August, the National Gallery sent him an email thanking him for his work and letting him know the staff agreed with his findings.

Crawford’s self-published book, Dating Jane, about his research into the Spencer painting, includes a chapter on The Exhumation.

Information from: The Roanoke Times, http://www.roanoke.com 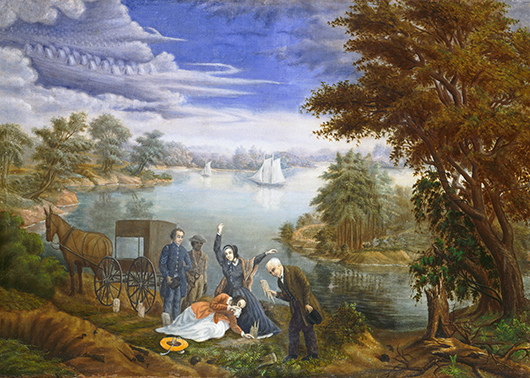 The painting by Linton Park (1826-1906) formerly know as ‘The Burial’ is now named ‘The Exhumation.’ Image courtesy National Gallery of Art, gift of Edgar William and Bernice Chrysler Garbisch.

Lawrence Salander: the art world’s Bernie Madoff, and his cons