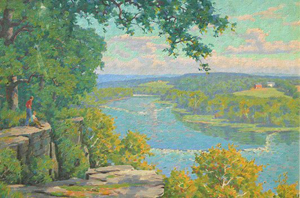 Of his 50 watercolors in possession by the Sharpsburg Historical Society, Jex’s detail goes beyond his brushstrokes.

Vernell Doyle, society president, points out the notes in the margins of each of his paintings including such information as where the location was when he painted the works depicting the Civil War or from which references he used when recreating each scene. There are even notes stating the number given to the painting in his slideshow presentation.

During an opening of the show, “The Upper Potomac of the Civil War,” which opens Friday, Sept. 7, at the Washington County Arts Council in downtown Hagerstown, visitors will be able to see the details that Doyle discussed.

So with an artist who put thought into every line or stroke one can only imagine what Jex would have thought about one detail being overlooked for more than 20 years – one of his paintings is missing.

The painting is called Panic Below Ball’s Bluff. Doyle said it was part of his collection of watercolors on the Civil War that focused on Washington County as well as neighboring Harpers Ferry, W.Va.

The only proof is a black-and-white booklet to show that it did exist.

“We see this dramatic painting and we see the black and white of it, not the whole thing. That is not in this collection,” she said.

They know that Jex still had it in his possession in 1971, when he used the painting as part of a slideshow at the Washington County Historical Society.

“Somewhere between then and 1990, it got someplace else, we know not where,” she said.

Doyle said the painting was last seen in November 1990.

And as she is gearing up for the Jex exhibit, she would love to one day have the painting back where it belongs.

“We would love to have it recovered and put it back into the collection,” she said.

But now, visitors to the arts council exhibit will have a chance to see some of the collection of watercolors. Doyle said about 40 will be on display of the 50 they have. Most depict Civil War battles or scenes but there are also four illustrated maps. One of the maps will be part of the 40 on display.

But Doyle said what it also shows is not only Jex’s passion for the Civil War, but his affection for Harpers Ferry and Sharpsburg areas.

Garnet W. Jex was born in Kent, Ohio, in 1895. As a young boy he moved to Washington, D.C., with his mother following the death of his father. The city would remain his home until his death in 1979.

Her interest dates to 1994 when the Harpers Ferry National Historical Park celebrated its 50th anniversary. The town had Jex paintings at the Camp Hill Methodist Church Hall that depicted the area in the 1920s to 1960s.

“It was a nice record of Harpers Ferry – how it looked at that time,” she said. “Nobody got to see them except people who went to the church.”

They had a reception and had Smithsonian photographer Eric Long photograph the paintings and the town had postcard packs made up of the images, so at least people could see them.

“Then I got really, really interested in his work and finding out more about him,” she said.

Piscitelli traveled to a gallery in Charleston, S.C., where a man had several Jex paintings, mostly depicting the C&O Canal.

She told him that she loved Jex’s work, but asked the gentleman what made it so important?

“He said, ‘It records a time that people would never see again,’” Piscitelli said. “I think that’s what makes this important, at least important to this region.”

Piscitelli said the watercolors that Sharpsburg Historical Society has were works he did for Washington, D.C., Centennial Commission to commemorate the 100th anniversary of the Civil War. That is why all 51 paintings are seen in the booklet published by the commission.

He painted murals at the reptile house at the National Zoo in Washington, D.C. And from 1936 until his retirement in 1962, he was employed at the U.S. Public Health Services. He ended his career as chief of graphics, Bureau of State Services.

Piscitelli said he also painted for his own enjoyment, and one of his favorite places, it seems was the Harpers Ferry and Sharpsburg areas. Since 1918, Jex had been coming to the area.

And for the next 50 years, Jex would make trips outside of the District to the area as part of the Landscape Club of Washington, D.C.

Piscitelli said Jex painted about 500 paintings, most of which were oils and of landscapes.

But Jex also had an interest in the Civil War. In the mid-1930s, Jex visited Civil War sites close to his D.C.-home. Eventually in 1951 he formed the Civil War Round Table of Washington, D.C., with fellow like-minded history buffs.

In 1962, Jex was honored for his achievements in Civil War art and presented the Round Table’s Gold Medal Award by Civil War historian Virgil Carrington Jones.

Although some can argue that there are slight historical inaccuracies in his paintings, Piscitelli said he did have a true love of history.

“He was really interested in history, and he wanted to get the history right,” she said.

Piscitelli is republishing The Upper Potomac in the Civil War, using high-resolution color scans of all the 50 paintings that Sharpsburg Historical Society has.

And of all things, Piscitelli said his work needed to be reproduced in color.

“I was amazed that the colors are so bright,” she said.

Oftentimes, she said, watercolors can look muted, especially for paintings that are 50 years old.

She was also amazed at the detail that Jex was able to achieve.

Included with each painting in the booklet will be original texts from Jex about the paintings, as well as any additional margin notes made by the artists.

But Piscitelli said some of the notes might have been for Jex’s eyes only. For instance, on one painting were the letters “DWF.” She suspected that it was a reference note from where he got his historical information before sketching, but couldn’t figure out which reference book. She realized it was from the book Divided We Fought.

Piscitelli said one of her regrets is not knowing about Jex sooner, or being able to meet him before his 1979 death.

John Frye, director of the Western Maryland Room at the Washington County Free Library, had the chance to meet Jex, and was involved in an exhibit at the library in the late 1970s. Frye said “he did a very good job” when it came to his paintings.

But for Piscitelli, Jex will be part of her life for a few more years. She has plans of cataloging all of his 500 paintings as well as writing a book based on her extensive research.

“He had a remarkable appreciation of the beauty and the history of our area,” she said, “that makes him very special, that he was able to translate that to artwork.”

Doyle said she will continue to look for the last missing Jex painting of the series, and hopes to one day be able to have the completed collection.

In the meantime, she continues to write letters and do research to see if she can locate it.

But in the meantime, Doyle said she’s excited to display Jex’s work, as well as fulfilling Jex’s wish: that his paintings be shared with the public. In order to show the exhibit, the Sharpsburg Historical Society was awarded a Heart of the Civil War grant, which stipulates that the exhibit must be in a ceritified heritage area. Sharpsburg is not certified yet, but Hagerstown is, Doyle explained. They also received a grant from the Hagerstown-Washington County Convention and Visitors Center.

“These paintings are 50 years old and they are in excellent condition so we will have this opportunity to share them as Jex would have liked and to preserve them, and to share them in another way through the prints,” she said.

However, because these particular paintings are watercolors, Doyle said exposing them to sunlight and the elements actually slowly destroys the paintings. That is why this Jex exhibit is so important.

First, she said, to give Jex more exposure than the other pieces of work he has done. And, she said, to see how Jex portrayed a more “human dimension” to the Civil War. 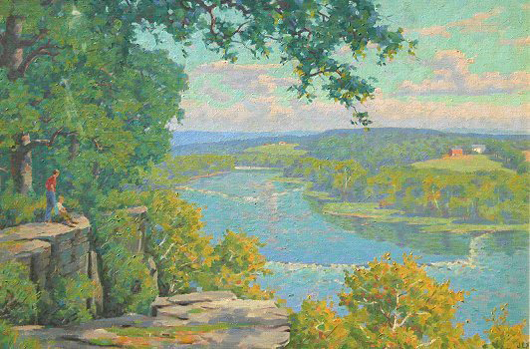