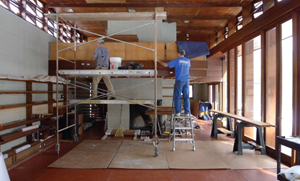 LOWELL, Ark. (AP) – The Bachman Wilson House, a Frank Lloyd Wright-designed home acquired in January by Crystal Bridges Museum of American Art, has arrived in northwest Arkansas after traveling by road and rail from where it was built in Millstone, N.J., 60 years ago.

After weeks of careful disassembly, wrapping and labeling by workers, the 2,800-square-foot house and its contents were loaded onto a J.B. Hunt Transport tractor-trailer and a separate container for transport to the trucking company’s storage facility in Lowell. J.B. Hunt donated its services for the move.

“We’ve moved a lot of neat items, but not such a unique piece of history,” Eric McGee, senior vice president-transportation for J.B. Hunt, told the Arkansas Democrat-Gazette.

Just in the past year, the trucking company has moved a truckload of human brains for research, as well as lasers for the U.S. Navy and live honeybees.

The tractor-trailer traversed 1,235 miles and crossed states including Pennsylvania, Ohio, Indiana and Missouri to get to Lowell.

The separate container was trucked to Chicago and taken by Norfolk Southern Railway to Kansas City, Mo. The trucking company then picked the container up and transported it to northwest Arkansas.

The expedition took place during a weekend with the help of two drivers who’ve each logged more than 1 million miles without an accident, McGee said.

The pieces will be moved to a hangar at the Northwest Arkansas Regional Airport in Highfill for storage until the site work is complete at Crystal Bridges in Bentonville. Sections will be taken to the site as needed.

Crystal Bridges does not disclose the cost of acquisitions, though the trucking company insured the trailer and container, both 53 feet long, for $450,000 each.

“I’m told (that) anything and everything is in there,” Miller said of the trailer and container.

Crystal Bridges did not buy the land on which the house used to sit, and the foundation remains on the site.

The Bachman Wilson House’s previous owners, Lawrence and Sharon Tarantino, put the house up for sale after repeated flooding from the nearby Millstown River.

The Usonian house is one of about 60 designed by Wright with simplicity and affordability in mind. Abraham Wilson and Gloria Bachman commissioned Wright to design the house in 1954. Gloria’s brother, Marvin Bachman, was an apprentice under Wright.

The Tarantinos, one an architect and the other a designer, were adamant about finding a new location for the house that mimicked the natural beauty of its former location. Crystal Bridges’ 120-acre grounds are camouflaged by rare trees and foliage, making it difficult to see the museum from afar, even in the dead of winter.

The site selected by the museum for the house is off the art trail, a short walk from the museum’s south entrance and overlooking Crystal Spring.

With the reconstruction yet to be done, more hard work lies ahead.

Scott Eccleston, director of facilities and grounds for the museum said the rebuild will be completed in two phases: preparation of the site and actual reassembly.

The first phase – doing dirt work on the near-half-acre spot and laying the infrastructure – should be done by July 4, he said.

A construction fence and signs have been installed and there’s been some rerouting of trails.

“In the next couple of weeks, you will hear equipment moving out there,” Eccleston said.

The reconstruction and landscaping should be complete sometime in spring 2015.

Deconstruction of the Bachman Wilson house gets under way with the careful removal, inventory, and packaging of the home’s interior fixtures and board and batten wall panels. Video courtesy Crystal Bridges, Tarantino Studio copyright 2014. 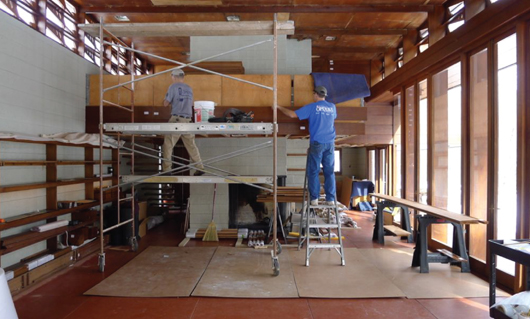 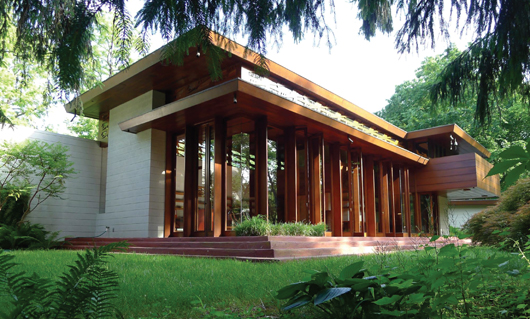 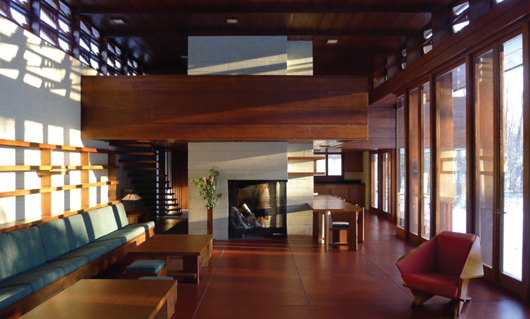