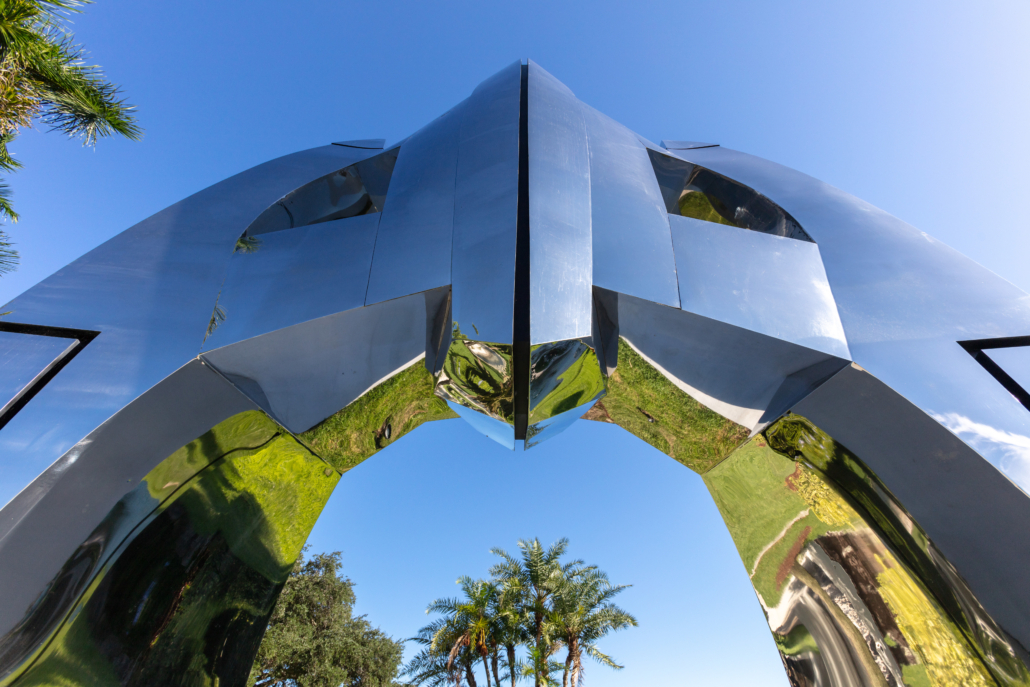 BOCA RATON, Fla. –  The monumental new Hubert Phipps sculpture titled Rocket has been selected for an Art in Public Places initiative in South Florida, at the Boca Raton Innovation Campus (BRiC), the historic tech landmark where the first IBM Personal Computer was invented. This new public art program is part of a cultural partnership between the Boca Raton Museum of Art and CP Group, the owner of BRiC and a premier developer and operator of commercial real estate.

South Florida officials heralded this announcement with an unveiling ceremony at BRiC, officially welcoming Rocket as one of the largest outdoor sculptures ever chosen for a public art initiative in Palm Beach County. The Phipps sculpture is valued at $1.5 million, stands 30-feet tall, weighs 9.8 tons, and took more than 2,200 square feet of stainless steel to construct. The Rocket sculpture towers alongside a waterfront panorama of iconic architecture designed by Marcel Breuer in the 1960s. This celebrated architectural style by Breuer is rarely seen at this grand of a scale, spanning so many acres. The new sculpture by Phipps and the historic buildings designed by Breuer marry each other well in the Brutalist style, creating a powerful visual impact. 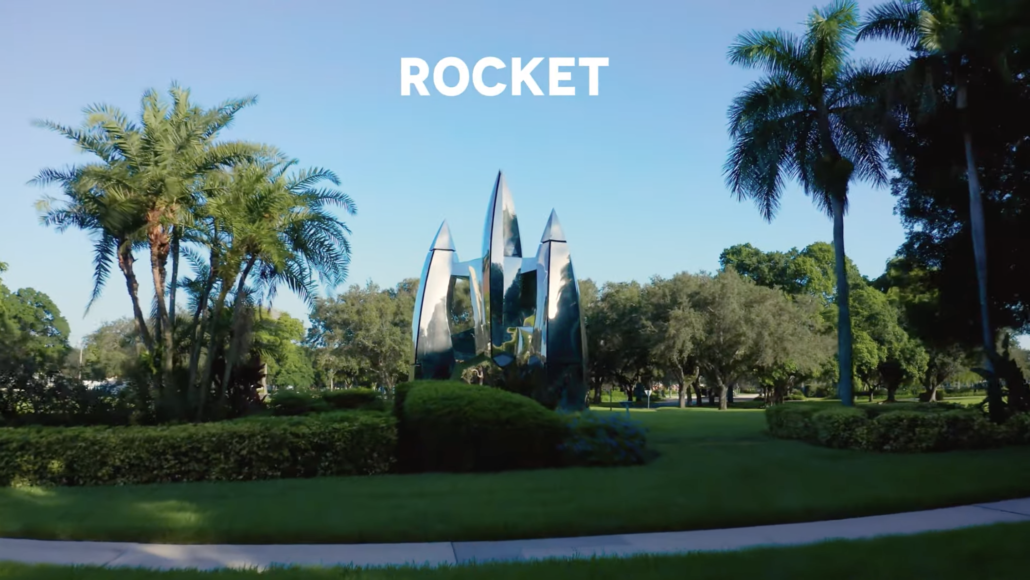 “The sculpture by Hubert Phipps was conceived as that intersection between art and science, and celebrates the heroics of modern engineering, as also seen in Marcel Breuer’s historic building designs for IBM’s North American Research and Development Headquarters,” said Irvin Lippman, the Executive Director of the Boca Raton Museum of Art. The gleaming, reflective stainless steel Rocket was two years in the making, with a nod to sci-fi retro futurism. The campus encourages visitors to walk around and underneath it, to enjoy their funhouse mirror images on the shiny surface.

A nationally acclaimed artist, Hubert Phipps was also a champion race car driver (National Champion in the SCCA 1981 Formula Atlantic) and is commemorating his upcoming 50th anniversary as an aviator. Phipps often pilots his Airbus Helicopter H-120 down to Palm Beach from his artist studio in Virginia. 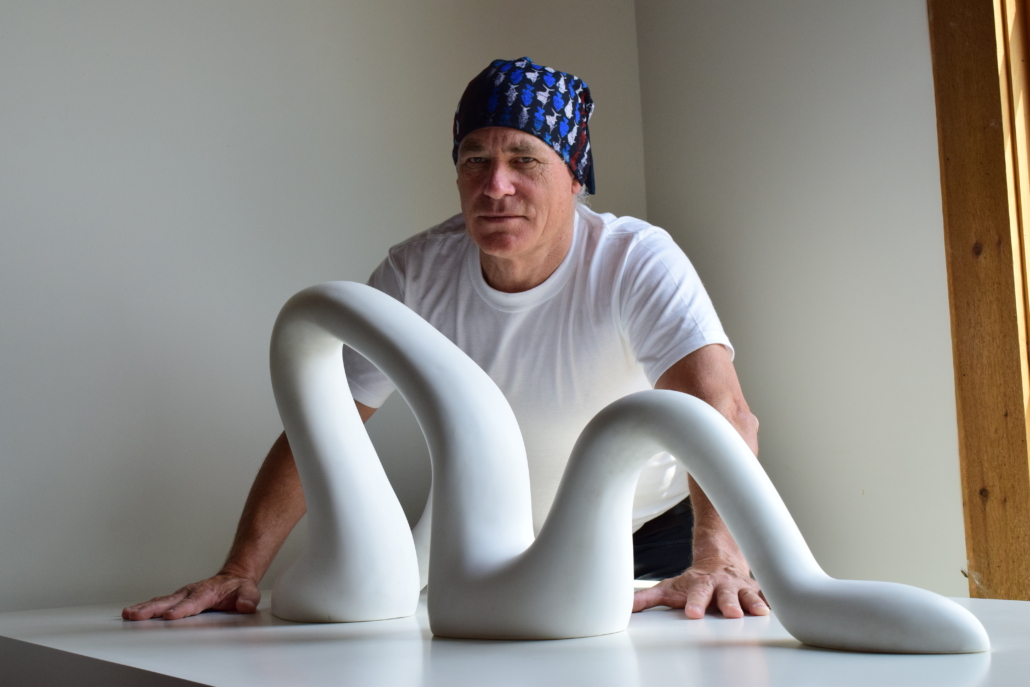 The Phipps family were early pioneers of Palm Beach, and adventures in aviation are a longtime tradition for the family. One of his ancestors, Amy Phipps Guest, was one of the first women aviators back in the 1920s. She championed Amelia Earhart’s successful transoceanic flight in 1928. Amy yearned to be the first woman to fly across the Atlantic Ocean, but her protective family insisted that Earhart be selected in her place. Amy sponsored that historic flight, and welcomed Amelia when she landed in the U.K. Amy was prominent as a women’s suffragist, and an influential aviation enthusiast.

The location of the new sculpture, BRiC, also has a special mark on history. Now owned and managed by CP Group, BRiC is where the first IBM personal computer was invented, the first smartphone, early robotics technology, and other tech marvels. The state- of-the-art, 1.7 million square foot office park is a magnet today for forward thinkers in technology and life sciences.

Marcel Breuer’s original design called for 620,000 square feet of research, development and office space in a concrete, Y-shaped building around a central lake that now faces the Rocket sculpture by Phipps. The sculpture is fast becoming a must-see spot in South Florida for art lovers who cherish selfies with awe-inspiring artworks.

“I am honored to have my artwork selected for this public art initiative by the Boca Raton Museum of Art,” said Phipps. “It is inspiring to see the Rocket sculpture surrounded by the creative genius of Marcel Breuer’s architecture at the Boca Raton Innovation Campus, where so much history was made in the realms of technology.”

More About ‘Rocket’ by Hubert Phipps

Phipps refined the sculptural design in Maya, a computer 3D modeling software program, after developing the model out of clay from a sketch. The monumental outdoor installation is an edition of three, which are for sale (the dimensions are 30’ x 24.8’x 9.5’ or 9.1 x 7.5×2.8 meters). Rocket was fabricated in Hangzhou, China at the Tany Foundry, out of sheet grade AISI 316 stainless steel, with the armature constructed out of AISI 304 steel. This high-quality-grade stainless steel, which is corrosive resistant, does well in subtropical environments. Great care has been taken to engineer the sculpture to stand up to category 5 hurricanes.

Conceptual designs by artist Hubert Phipps, including the 3D computer model. Images provided by the artist

“We are honored to have Hubert Phipps’ impressive Rocket sculpture on our campus,” said Angelo Bianco, Managing Partner of CP Group. “As the cornerstone of our outdoor art gallery, this is an important step in our process of transforming BRiC from a closed campus into an open community asset with a STEAM focus that is integrated into the business, educational, and social fabric of South Florida. This new art installation is attracting broad popularity throughout the tri-county area, and plays an instrumental role in making BRiC a community destination.”

A Passion for Aviation and Aerospace Science

“A great admirer of Marcel Breuer, Hubert Phipps brings us back full circle to the idea of forms levitating into space. The monumental Rocket boldly captures that heroic lift-off with a sense of awe and wonderment,” Lippman added. “Breuer’s expressive concrete buttresses shape an architecture that appear to lift the building upwards from the ground. Its polished surface further enlivens the sculpture reflecting the sky, lawns, lights, and the people moving around the park, welcoming interaction with visitors – perfectly encapsulating the experience of art in public places.”

Hubert Phipps has logged 4,000+ hours of flying time, since the age of 16. “I’ve had a passion for aviation since I can remember, and vividly recall watching the first landing on the moon in 1969,” adds Phipps. “During my sophomore year in high school I asked for permission to go to the local airport for flight training instead of soccer practice. I earned my student pilot’s licensed and was flying over that school at 1,000 feet, looking down and thinking ‒ this is a lot cooler than playing soccer. As an artist, I’m attracted to the aesthetics of aerodynamic forms and elements relating to spacecraft.”

More About this Public Art Partnership for the Community

CP Group aligned with the Boca Raton Museum of Art and its Executive Director, Irvin Lippman, to add Rocket by Hubert Phipps to the campus art collection and make it BRiC’s landmark statement piece as part of a greater project of a full-scale indoor and outdoor art museum. Lippman has placed an emphasis on extending art outside of the museum’s walls with an Art in Public Places initiative, which also includes bringing a Dorothy Gillespie gallery to BRiC. Lippman is also a member of BRiC’s Arts, History and Architecture (AHA) committee, which helps provide input and value on every aspect of the campus’s revival and ensures BRiC is thoughtfully integrating arts, history and architecture into its plan. The sculpture at BRiC is already attracting the attention of private collectors, including Palm Beach real estate magnate Lawrence Moens, who purchased the original conceptual drawing and artist proof of the sculpture. The gallery TW Fine Art, with locations in Palm Beach and Brooklyn, is selling a limited edition of the maquette-sized version of Rocket and will feature Hubert Phipps in a solo gallery show during Art Basel season, in Palm Beach. 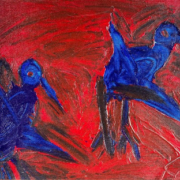 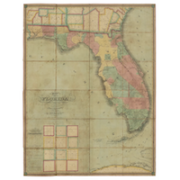 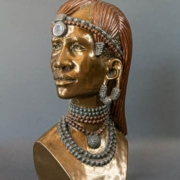 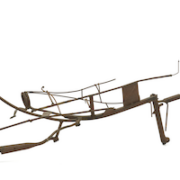 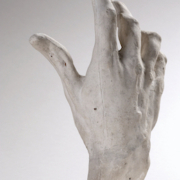 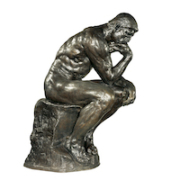 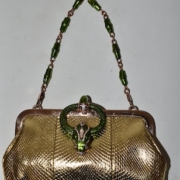 AUDIO: Unpublished Lennon/Ono interview, song with Danish schoolboys to be ...
Scroll to top