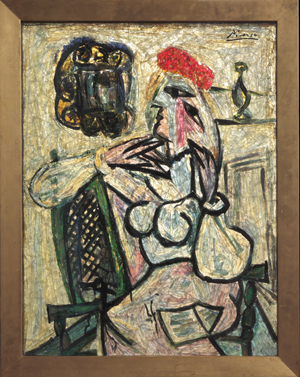 EVANSVILLE, Ind. – An exciting art discovery has led the board of trustees of the Evansville Museum of Arts, History & Science to approve a contract to sell a rare, signed Pablo Picasso artwork from the museum’s collection. The board’s action was approved by the museum’s members at a meeting held Tuesday, Aug. 14.

Recently, the Evansville Museum learned the piece in its collection – “Seated Woman with Red Hat” (“Femme assise au chapeau rouge”) circa 1954-1956 – had not been identified as a Picasso in documentation provided to the museum when the piece was gifted in the 1960s. It has been in the museum’s storage area for nearly 50 years.

The museum has determined that the expense and added requirements to properly secure a piece of potentially significant value are too great. The trustees therefore entered into a contract with the New York auction house Guernsey’s, which will conduct a private sale of the work of art.

“Seated Woman with Red Hat” was created using a layered-glass technique called “gemmail” (plural: gemmaux). Gemmail uses individual pieces of colored glass overlapped and joined together with clear liquid enamel and then fired. When illuminated from behind, gemmail produces a result that modulates color and captures light through many layers and textures of glass. Although Picasso was less-known for this art form, he produced 50 or more gemmaux masterpieces during his two years of study at the Malherbe Studio in France.

Picasso gave one-half of his collection to the Malherbe family in return for their expertise, training and collaboration, and kept one half for himself. The pieces in Picasso’s portion of the collection were sold to private collectors.


When the Evansville Museum received the gift, associated documentation indicated that the piece was created by an artist named “Gemmaux” – confusing the name of the technique with the artist’s name – and that it was a design inspired by a Picasso painting, which is how it was cataloged by museum staff. It was noted that the piece was signed by Picasso. The piece was placed in museum storage and never displayed. Earlier this year, Guernsey’s, in researching Picasso’s gemmaux works, contacted the Evansville Museum about the gift from Raymond Loewy. It was this contact from Guernsey’s that revealed the significance of the piece, prompting further research and study.

R. Steven Krohn, the president of the museum’s board of trustees, named a special advisory panel to determine a course of action regarding the piece that is proper and best for the museum. After extensive due diligence and many discussions with Guernsey’s, the panel recommended selling the piece because of the expense and added requirements to properly secure a piece of potentially great value.


“Now that we have a full understanding of the requirements and additional expenses to display, secure, preserve and insure the piece, it is clear those additional costs would place a prohibitive financial burden on the museum,” Krohn said. “It is in the best interest of the Evansville Museum to sell this work of art.”


John Streetman, executive director of the Evansville Museum, described the piece as “extraordinary” and said, “It sparkles like a jewel.” Streetman added, “It was undoubtedly a unique set of circumstances that uncovered this treasure within our museum. This was a difficult but prudent decision to move forward with deaccession.”


The estimated proceeds from a sale are unknown, and the museum will make no immediate decisions about utilizing funds from a successful sale.


Krohn added, “While we are optimistic about the potential additional funds a sale might bring to the museum, we will continue to rely on the support of individuals, as well as our business community, who so generously contribute through memberships, endowment gifts and grants to sustain and continue the museum’s inspiring and educational programming and exhibitions.”


The Evansville Museum also has five original Picasso works on paper, signed by the artist, including two on display in an area of the Crescent Galleries, which showcase the museum’s collection devoted to portraits and figure studies.


About the Picasso Gemmail Artwork:


The Evansville Museum’s gemmail, signed by Picasso, is 36 inches high, 28 inches wide and 3 inches deep, and is in a wood support. The piece is a portrait of Marie-Thérèse Walter, the French mistress and model of Picasso from 1927 to about 1935, and the mother of his daughter, Maya Widmaier-Picasso. It is based on Picasso’s oil portrait “Woman with Red Hat” (“Femme au chapeau rouge”) completed in 1934.


The word “gemmail” comes from the French words for “precious stone” and “enamel.” The gemmail technique was developed during the 1930s by French painter Jean Crotti. “Gemmaux” are works made from irregularly sized pieces of colored glass that have been joined together by the application of clear liquid enamel, which is then baked to a temperature that causes the entire construction to bond. Gemmaux have a three-dimensional quality due to the varying depths of the colored glass used. The piece is encased in a deep wooden shadow box, which is illuminated from behind, emphasizing its light-filled dimensions. The Malherbe family in France, who were from a long line of physician-inventors, helped successfully develop and perfect the process of gemmail at the Malherbe Studio, where Picasso created his works.


Picasso worked in the Malherbe Studio from 1954-1956, when gemmail was still considered a primitive technique. His gemmaux masterpieces toured prominent museums, including the prestigious Metropolitan Museum of Art and the Corning Museum of Glass. The pieces in Picasso’s portion of the collection were sold to private collectors, including the Emperor of Japan, Nelson Rockefeller and Prince Rainier of Monaco. 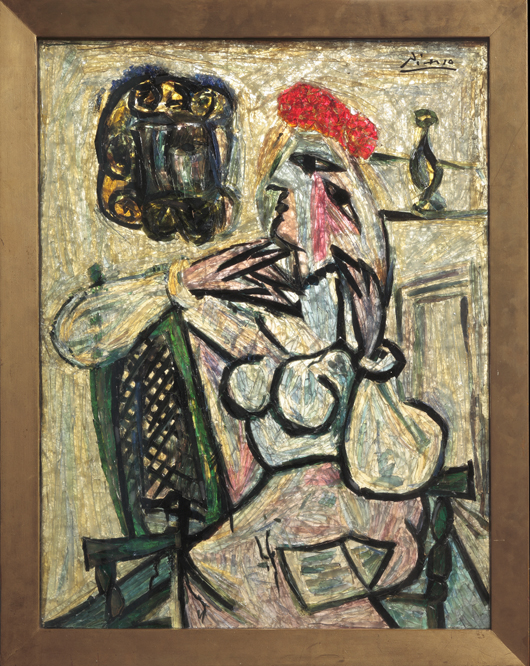