A panoramic view of downtown Marfa, Texas, population 1,981. At left is the Hotel Paisano. In the distance is Marfa’s City Hall. Photo licensed under the Creative Commons Attribution-Share Alike 3.0 Unported license.

EL PASO — Selling Marfa is not a difficult job for Kaki Scott, the 29-year-old executive director of the Marfa Chamber of Commerce.

“Most of the time I’m just directing traffic,” Scott said. “Every now and then, people kind of stumble through Marfa and say, ‘What’s going on here?’”

Marfa doesn’t look like any of the surrounding towns in far West Texas. Outsiders come to soak up the diverse culture of this former ranching town of 1,900 people about 200 miles southeast of El Paso.

Marfa has become an art oasis in the desert, a town more cosmopolitan than some imagine.

With that in mind, it’s not a big surprise around here that the nationally distributed Smithsonian Magazine lists Marfa as No. 8 among “The Top 20 Best Small Towns in America” in its May issue.

“It’s just a flyspeck in the flat, hot, dusty cattle country of Southwest Texas — closer to Chihuahua than Manhattan,” but Marfa is cooking, the magazine suggests, “thanks to an influx of creative types from way downtown: filmmakers like the Coen brothers, who shot ‘No Country for Old Men’ in Marfa, indie rock bands and others who have brought such outrageous installations as Prada Marfa, a faux couture shop in the middle of nowhere by the artists Elmgreen and Dragset.”

“The mentality of the community has shifted. We’re really more progressive, willing to look at the possibilities,” Scott said. “The majority of the people who live here are lovely. But there is definitely a gap between old Marfa and new Marfa. A lot of people in the established community feel like the town has been overrun with a different kind of people, people with worldly ideas, people with open minds to different kinds of lifestyles. That’s been a kind of friction.”

Scott suggests that some resentment has to do with money, the disparity between newcomers and older families with modest means and deep roots in Marfa.

“The creative people are a bit louder and more flamboyant than the local people,” Scott said. “But without them, the whole community would have folded and collapsed. We’re definitely better off with the new direction Marfa has taken.”

Scott grew up in Marfa, finished school in nearby Fort Davis, went away to college and returned five years ago.

Marfa once was better known for the mysterious lights dancing in the nearby desert and as the town where Elizabeth Taylor, Rock Hudson and James Dean hung out while filming the Western epic movie “Giant” in 1955.

Marfa has become a destination, a pit stop, for various entertainers going from one venue to another. The reunited El Paso band At The Drive-In lured 500 fans to Marfa in April.

The late New York sculptor and critic Donald Judd started Marfa’s transformation into an arts colony in the 1970s. He bought and restored various properties in the town.

Judd’s works still attract visitors from across the world to the Donald Judd and Chinati foundations. The Chinati Foundation runs a museum and sculpture park on 340 acres that used to be an Army camp on the southern outskirts of Marfa.

“Marfa is a little art oasis in the desert,” Vargo said.

“I knew about some of the Donald Judd works and wanted to see them,” she said. “But I had never heard of Marfa until we came out here.”

Alberto Tomas Halpern, 24, works as a photographer and reporter with the Big Bend Sentinel, the weekly Marfa newspaper owned by his parents. He went to college in Washington, D.C., and came back to Marfa.

“Geographically, Marfa is really isolated. But I always tell people Marfa is in the middle of everywhere,” Halpern said. “The arts and cultural institutions have really put Marfa on the map. We get people here from all corners of the globe.”

Joe Cabezuela, 67, leads a group trying to restore what remains of Blackwell School, an adobe structure dating to 1889 and a segregated school for Mexican-American children until 1965. The state has designated the building a historic site.

“Before the art people came into town, Marfa was almost a ghost town. It was pretty bad,” Cabezuela said. “There’s been more work. But there’s been bad vibes among some people from Marfa.”

Cabezuela suggests that some of the resentment has to do with inflated real estate values.

“Eventually, it’ll be like Santa Fe. We’ll have to live in a mobile home outside the city limits,” he said, joking.

Marfa native Mateo Quintana, 74, recalls looking out the window of his small barbershop and seeing mostly empty stores across the street.

“The artists revived Marfa,” Quintana said. “The town was failing when they came and started fixing up a lot of places. “When I was young, everyone mostly worked on ranches.”

Dirk Vaughan, 55, a front-desk clerk at the Paisano Hotel, described Marfa as a composite of newcomers like himself plus well-established Hispanics and old Anglo ranching families.

“It’s just a really broad, very diverse place to live with a lot of interesting cultural aspects,” he said. “It’s not a typical small town. A lot of cultural things come here because of the influence of all the different arts foundations.”

David Branch, 35, earned a master’s degree in architecture at the University of Texas at Austin. He is helping restore a two-story adobe house, one of the oldest houses in Marfa, for a Houston family. “It’s a struggle to make a living out here, but there’s community people here that are intriguing and inspiring and that’s helpful, especially when you’ve removed yourself from a larger city or urban center,” he said. “At the same time you get the easygoing nature of a small town. And it’s moderately affordable.”

Elizabeth Redding, an art historian with roots in Manhattan, works at one of two Ayn Foundation galleries in Marfa’s historic Brite Building.

Redding, 55, first came to Marfa to visit Judd’s world-renowned collection at the Chinati Foundation. She fell in love with Marfa and decided to settle down here six years ago.

“I just had a feeling that this town was unique and that I wouldn’t miss the things that a big city had to offer,” she said.

Redding pointed out that Marfa lacks shopping malls, pharmacies and other comforts that some people might crave. But Marfa continues to attract tourists from all over the world, not just elite art groups. “This town is all of us,” Redding said. “That’s what makes it unique and special.”

A panoramic view of downtown Marfa, Texas, population 1,981. At left is the Hotel Paisano. In the distance is Marfa’s City Hall. Photo licensed under the Creative Commons Attribution-Share Alike 3.0 Unported license. 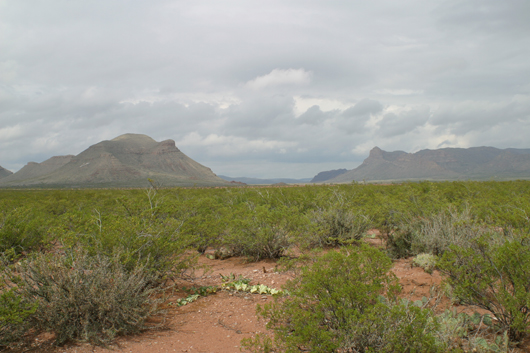 The town of Marfa, Texas, is located in the picturesque Chihuahua Desert.

Russian artists parade their creations in protest
Scroll to top