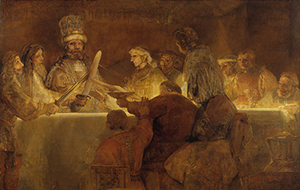 Rembrandt’s ‘The Conspiracy of the Batavians under Claudius Civilis’ (1661-62) was deemed too shocking for public art. Image courtesy of Wikimedia Commons.

LONDON (AFP) – An extraordinary exhibition into the later works of Rembrandt opened at the National Gallery in London on Wednesday, revealing the energy, innovation and empathy of the Dutch master right up to his death.

Featuring about 40 paintings, 20 drawings and 30 prints loaned from collections around the world, “Rembrandt: The Late Works” is the first in-depth exploration into the final stage of the artist’s career.

From the early 1650s to his death in 1669 at the age of 63, Rembrandt “seems to have undergone a bit of a crisis in his art production”, said curator Betsy Wieseman.

“During this later phase he seems to get regenerated and re-energized, and becomes much more productive in his ideas of what he wants to explore and what he thought was most important as an artist to try to communicate to people.”

After being declared bankrupt in 1656, Rembrandt spent the later years of his life in dire financial straits, while he was professionally humiliated when a commission for the new town hall in Amsterdam was sent back to him 1662.

But this period was also one of his most productive and saw the artist continue to develop innovative techniques, to take the world around him as his inspiration and seek to portray the most profound human emotions.

The National Gallery said it was a “once-in-a-lifetime exhibition,” and director Nicholas Penny described it as an “extraordinary group of paintings.”

The exhibition has been curated in close cooperation with the Rijksmuseum in Amsterdam, which has many of Rembrandt’s works and which will show the exhibition from February to May next year.

It begins with a number of self-portraits, which introduce visitors to the artist and reveal his brilliant use of light and shadow, as well as his unflinching honesty in recording his own ageing.

Thereafter the works are arranged thematically: Rembrandt’s use of light and experimental techniques, how he pushed the boundaries of convention, and his interest in revealing the inner thoughts of his subjects.

Rembrandt was constantly innovating, from putting paint on with a palette knife, to scratching marks with the back of a brush to depict wiry hair, to layering the ink on etchings in such a way to make each print seem like an individual work of art.

Some works seem ahead of their time, such as a A Young Woman Sleeping, a sketch in brush and brown wash.

“He was always pushing the envelope and trying to take things a bit further,” Wieseman said.

Rembrandt also pushed the boundaries on traditional commissions, such as in The Anatomy Lesson of Dr. Joan Deyman, which puts the cadaver rather than the surgeon center stage, and The Syndics, which brings unexpected life to a meeting of the board of the drapers’ guild.

His town hall commission, The Conspiracy of the Batavians under Claudius Civilis, which depicts a group of men pledging allegiance to a one-eyed chief, is a masterpiece in its use of light but was perhaps too shocking and was returned to Rembrandt.

The exhibition also shows how the artist brought to life Biblical figures, such as the turmoil evident on the face of the naked Bathsheba as she debated whether to respond to a request to leave her husband for King David.

Many paintings are moving in the intense emotion they depict, notably the loving couple shown in Jewish Bride, while others draw in the viewer by creating a sense of intimacy, such as Titus At His Desk.

The exhibition runs from Wednesday to Jan. 18 in London, and at the Rijksmuseum from Feb. 12 to May 17. 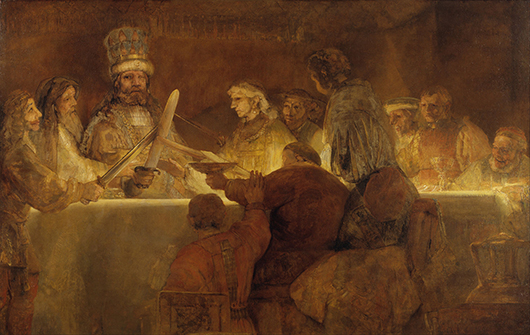 Rembrandt’s ‘The Conspiracy of the Batavians under Claudius Civilis’ (1661-62) was deemed too shocking for public art. Image courtesy of Wikimedia Commons.

Book Review: Why stealing a Rembrandt seldom pays off