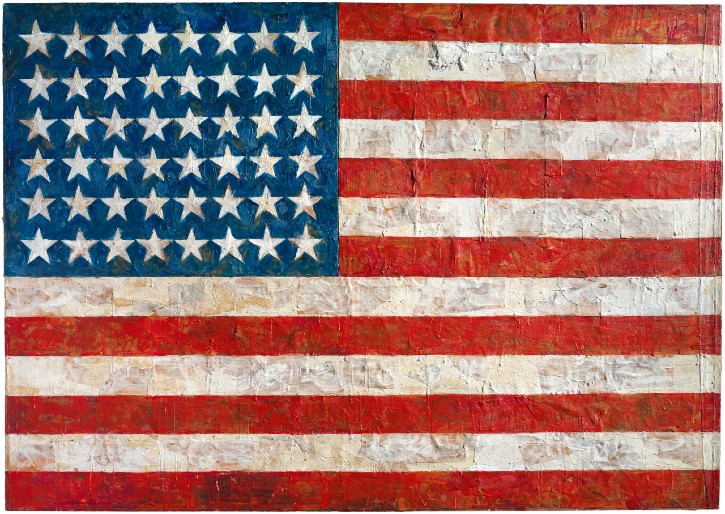 NEW YORK – The most ambitious retrospective to date of the work of Jasper Johns, organized by the Philadelphia Museum of Art and the Whitney Museum of American Art, will be presented simultaneously in New York and Philadelphia this fall. A single exhibition in two venues, this unprecedented collaboration, “Jasper Johns: Mind/Mirror,” will be the artist’s first major museum retrospective on the East Coast in nearly a quarter century. It opens concurrently in Philadelphia and in New York on Oct. 28.

Filling almost 30,000 combined square feet across the two venues, the exhibition will contain nearly 500 works. It is the most comprehensive exhibition ever devoted to Johns, creating an opportunity to highlight not only his well-known masterpieces but also many works that have never been exhibited publicly. Conceived around the principles of mirroring and doubling that have long been a focus of the artist’s work, this two-part exhibition, which follows a loose chronological order from the 1950s to the present, offers an innovative curatorial model for a monographic survey. It will chronicle Johns’s accomplishments across many mediums—including paintings, sculpture, drawings, prints, working proofs, and monotypes—and highlight the complex relationships among them.

“We are delighted to present this unique retrospective together with the Philadelphia Museum of Art, an important occasion for both museums, which have had connections with the artist going back decades,” said Adam D. Weinberg, the Whitney’s Alice Pratt Brown director. “The Whitney has been collecting and showing Johns since the 1960s and we are thrilled to honor his 90th birthday in 2020, which also marks the 19th anniversary of the Whitney’s founding. Enigmatic, poetic, rich, and profoundly influential, Johns’s work is always ripe for reexamination.”

“Given the crucial place that Jasper Johns holds in the art of our time, this collaboration enables our two museums, together, to examine the artist’s vision in all its multiplicity and depth,” added Timothy Rub, the George D. Widener director and CEO, Philadelphia Museum of Art. “The Philadelphia Museum of Art has long dedicated a gallery to the display of Johns’s work, which, given his admiration of Cézanne and Duchamp, richly resonates with our collection. Along with our colleagues at the Whitney, we hope to introduce a new generation of visitors in our respective cities to the exceptional achievements of this artist over the course of a career that now spans nearly seven decades.”

Since the early 1950s, Jasper Johns (b. 1930) has produced a radical and varied body of work distinguished by constant reinvention. In his 20s, Johns created his now-canonical Flag (1954–55), which challenged the dominance of Abstract Expressionism by integrating abstraction and representation through its direct, though painterly, deadpan visual power. His works have continued to pose similar paradoxes—between cognition and perception, image and object, painting and sculpture—and have explored new approaches to abstraction and figuration that have opened up perspectives for several generations of younger artists. Over the course of his career, he has tirelessly pursued an innovative body of work that includes painting, sculpture, drawing, prints, books and the design of sets and costumes for the stage.

The exhibition is conceived as a unified whole, comprising two autonomous parts, and is co-curated by two longtime scholars who each has a close relationship with the artist: Carlos Basualdo, The Keith L. and Katherine Sachs senior curator of Contemporary Art at the PMA, and Scott Rothkopf, senior deputy director and Nancy and Steve Crown Family chief curator at the Whitney. Basualdo noted, “We attempted to create an exhibition that echoes the logic of Johns’s work, and it is structured in a mimetic relation to his practice. Galleries at each venue will serve as cognates, echoes, and inversions of their counterparts at the other, allowing viewers to witness and experience the relationships between continuity and change, fragment and whole, singularity and repetition which Johns has used throughout his career to renew and transform his work.” Rothkopf said, “One of our primary aims was to revivify the incredible sense of daring and discovery at the heart of Johns’s art. He stunned the establishment as a young man but continues to astonish audiences with surprising new ideas as he nears 90. Surveying the whole of his career, we see an artist propelled by curiosity, constantly challenging himself—and all of us.”

The full breadth of the exhibition will offer visitors an opportunity to appreciate not only Johns’s most iconic paintings and sculptures but also his works on paper, which represent some of the most inventive prints and drawings created during the past 50 years. The structure of the exhibition will open a window onto the beauty, meaning, and remarkable artistic order that organizes Johns’s work. Inspired by the artist’s fascination with mirroring, symmetry, reversals, and doubles, the exhibition’s two halves will mirror one another. The retrospective is divided between the two venues, with pairs of related galleries designed to illuminate a different aspect of Johns’s thought and work through a specific methodological lens, whether by spotlighting themes, processes, images, mediums, and even emotional states. For example, one pair of galleries will explore the effect of specific places and communities on Johns’s art, with a room at the PMA devoted to his formative time in Japan and one at the Whitney focused on South Carolina, where he spent part of his childhood and later worked as a young adult. Other pairs of galleries will re-create exhibitions Johns staged at the Leo Castelli gallery in 1960 and 1968, respectively, and highlight his groundbreaking use of found motifs, as seen in a gallery at the Whitney devoted to his Flags and Maps and another at the PMA focused on his recurrent fascination with numbers. The unique double-venue framework aims to challenge the traditional format of the retrospective as a unified overarching and univocal narrative, providing an alternative model for tracing the arc of an artist’s lifework.

Drawing significantly on its collection of 215 works by Johns, the Whitney’s display will occupy the entirety of its 18,000-square-foot, fifth-floor Neil Bluhm Family Galleries, the building’s largest contiguous exhibition space, and the adjacent Kaufman Gallery. The Whitney’s installation will consist of more than 250 objects from domestic and international public and private collections, including nearly 50 works from the artist’s own collection, many of which are largely unknown to the public. At the Whitney, a progression of approximately 11 galleries will track the artist’s surprising evolution, with each gallery custom-built to create dramatic installations that emphasize specific aspects of Johns’s thought. 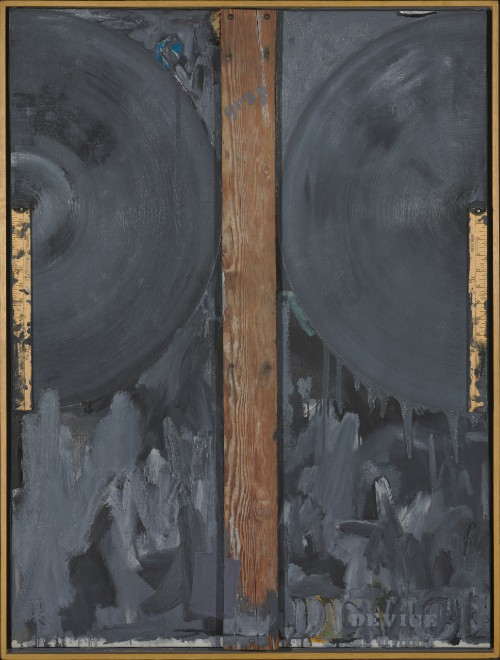 One highlight will be a gallery of his early Flags and Maps, organized as a stately faceoff between examples in color and those in black-and-white to evoke powerful associations about a divided United States. To accompany the Whitney’s own Three Flags, 1958—one of the icons of the museum’s collection—many extraordinary loans have been secured for the occasion, including White Flag, 1955 (The Metropolitan Museum of Art, New York); Flag on Orange Field, 1957 (Museum Ludwig, Cologne), and Flags, 1965 (artist’s collection, on long-term loan to the Walker Art Center, Minneapolis). The gallery will also reunite Johns’s three monumental Map paintings from the early 1960s for the first time in more than 20 years.

Another gallery will reveal Johns’s unique approach to printmaking through a suite of 15 large-scale Savarin monotypes, which find him exploring variations on image and palette to astonishing effect. Taking advantage of the Whitney’s signature views, another gallery will feature Johns’s recent sculptures bathed in natural light against the panoramic sweep of the Hudson River. Other major loans include the pivotal According to What, 1964 (private collection, on long-term loan to the PMA), the subject of an entire gallery; Device, 1961-62 (Dallas Museum of Art); and Montez Singing, 1989 (private collection), a celebrated painting indicative of the artist’s 1980s style—all three works have not been on view in New York since 1996–97. A gallery exploring Johns’s recent work will feature one of his largest works in the last decade, Regrets, 2013 (private collection). Acting as a mirror between the two venues, an edition of Johns’s landmark sculpture of two Ballantine ale cans, painted bronze, 1960, will appear at each venue—the Whitney’s from the artist’s collection and the PMA’s from Museum Ludwig, Cologne.

The Philadelphia Museum of Art’s equally comprehensive display will be spread across 11 rooms in the Dorrance Special Exhibition Galleries and adjoining Korman Galleries. It will feature approximately 250 works by the artist from both public and private collections in the U.S. and abroad, including approximately 60 works from the artist’s collection, many of which have never been exhibited to the public before. Upon entering the installation visitors will be confronted by Flag, 1954–55 (Museum of Modern Art), Johns’s earliest extant flag painting, an undisputable masterpiece of contemporary art and among the most influential images ever produced by an American artist. Flag will be followed by a gallery of the artist’s groundbreaking early works, including Painting with Two Balls, 1960 (collection of the artist), Fool’s House, 1961–62 (private collection), and Device, 1962 (Baltimore Museum of Art). A gallery dedicated to the artist’s treatment of numbers, a signature motif Johns has explored throughout his career, will feature a suite of four large paintings on the theme of 0 through 9, made between 1960 and 1961, photographs by the Italian artist Ugo Mulas of Johns’s masterful drawing 0 through 9, and the extraordinary set of color lithographs that Johns produced in 1969. Among the extraordinary loans to Philadelphia will be Untitled, 1972 (Museum Ludwig, Cologne), a key work, which has not traveled since 1996 and will be the focus of an entire gallery. Philadelphia will devote a section of the show to exploring Johns’s enduring relationship with Japan and Japanese culture, which dates to his Army service there in 1953 and further developed during return visits in 1964 and 1966. This section will include works that he made in Japan, such as Watchman, 1964 (The Broad), and the two existing versions of Souvenir (collection of the artist) and Souvenir 2 (private collection), both of 1964, as well as works by Japanese artists in Johns’s collection. 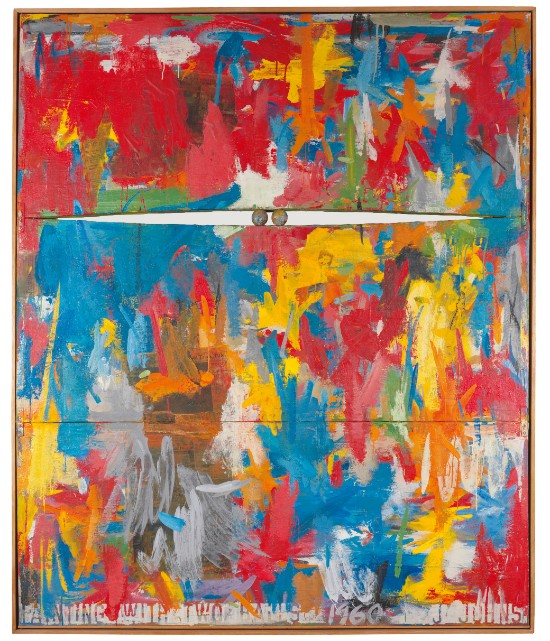 Echoing the Whitney’s presentation of Savarin monotypes, a gallery in Philadelphia will be dedicated to a captivating display of working proofs related to the print Untitled (Red, Yellow, Blue), and another Untitled print, both from the 1990s, illuminating the artist’s daring experimentation. A gallery of recent work will feature Johns’s extraordinary 5 Postcards, 2011 (private collection), and Untitled, 2018 (private collection), based on a photograph of a soldier, Lance Cpl. James Farley, taken during the Vietnam War by Life photographer Larry Burrows, a motif that Johns has used in a number of recent works, along with several recent drawings and paintings that have never been exhibited before, including a series devoted to the theme of skeletons.

In Philadelphia, one entire room will be devoted to the display of a large selection of prints by the artist, exhibited according to the strategies developed by John Cage in his celebrated exhibition Rolywholyover A Circus, in an homage to the close friendship between the artist and the musician. 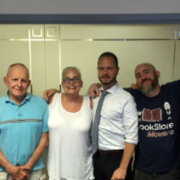 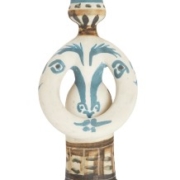 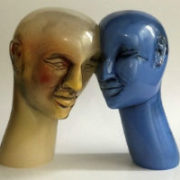 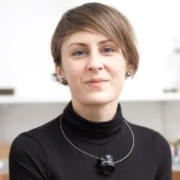 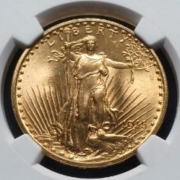 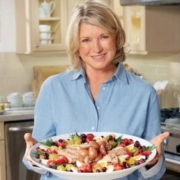 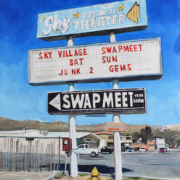 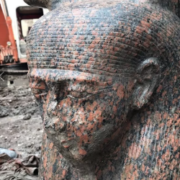