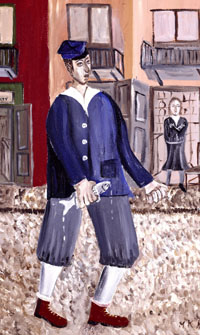 ‘Boy with Herring,’ 1992 is from the artist’s collection. Image courtesy of Barbara Kirshenblatt-Gimblet. Copyright 2009 Mayer Kirshenblatt.

Like the renowned American folk artist who launched her career in her 70s, Mayer Kirshenblatt didn’t start painting until he was 73. Since then, the 92-year-old Toronto resident has painted hundreds of canvases that evoke the vanished world of Jewish life in small-town Poland before the Holocaust.

More than 80 paintings and drawings by the self-taught artist can be seen at The Jewish Museum in an exhibition that is striking for its vivid detail, innocent charm and folkloric quality.

Kirshenblatt was born in Opatow, Poland, in 1916 and emigrated to Canada when he was 17. Nearly all the paintings in this exhibit are devoted to the daily rhythms of life in his boyhood town of 10,000 people, about two-thirds of whom were Jewish.

An unusual triptych offers a panorama of the town, from the war memorial and town well on the left side to the synagogue and cathedral spires in the center to the medieval gate of the once-walled city on the right.

Other paintings capture the hustle and bustle of market day, including one of the town’s well-dressed kleptomaniac slipping a fish down the front of her dress near a fishmonger’s table. Kirshenblatt explains in the audio guide that the woman’s wealthy husband would tell merchants to leave her alone and if she stole from them, to come by his office to collect from him.

Other scenes tenderly evoke domestic life in Kirshenblatt’s family’s two-room house, with its charming stenciled walls and spotlessly clean floor boards. All the action took place in the kitchen, where the young Mayer slept on a cot and relieved himself at night in the household chamber pot. Kirshenblatt’s memories would not be complete without a record of the many rituals in the Jewish calendar year, including prayer services, holiday celebrations, weddings and funerals.

Even though his paintings ache with nostalgia for a simpler way of life, Kirshenblatt decided as a teenager to emigrate in 1934 to Canada. “I always considered myself a Pole,” he says, “but the Polish government considered me a Jew.” By leaving, of course, he was spared the fate of so many of his relatives who perished in the Holocaust. 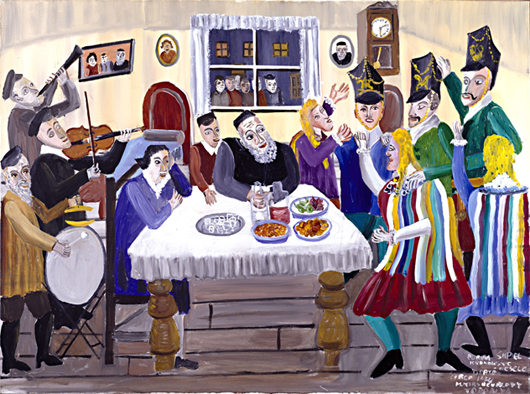 In Canada, Kirshenblatt painted houses and eventually opened a wallpaper and paint store. In his 60s, suffering from depression, he was urged by his family to paint his childhood memories. They bought him brushes and an easel, even signing him up for art classes at the local community center.

It took about 10 years, but eventually, he took the plunge, making a pencil drawing, then a watercolor, then an acrylic painting on canvas board of the kitchen where he had slept as a youngster and taken baths with his three brothers in a big washtub. That was in 1990, and he is still painting, trying to create a comprehensive record of the “big world out there before the Holocaust.”

They Called Me Mayer July: Painted Memories of a Jewish Childhood in Poland Before the Holocaust runs through Oct. 1, then travels to Amsterdam in late 2009 and Warsaw in 2011.

Museum of Polish Jews built on site of destroyed synagogue