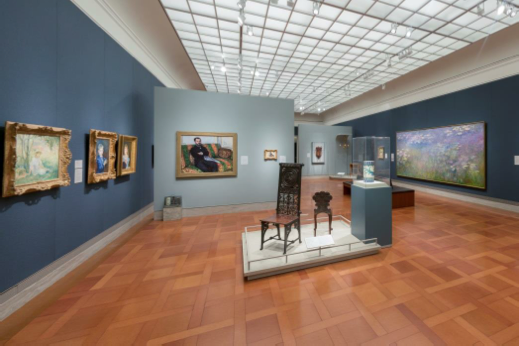 The Nelson-Atkins Museum of Art opened the Bloch Galleries on March 11. Photo by Joshua Ferdinand

KANSAS CITY, Mo. – The Nelson-Atkins Museum of Art has opened the Bloch Galleries in the museum’s original 1933 Beaux-Arts building, featuring the Marion and Henry Bloch Collection of Impressionist and Post-Impressionist art.

Comprised of 29 masterpieces acquired by the Bloch family over the course of two decades and promised to the museum in 2010, the Bloch Collection nearly doubles the museum’s current holdings of Impressionist and Post-Impressionist art.

In 2015, the Marion and Henry Bloch Family Foundation provided a $12-million gift to support renovation of the museum’s European art galleries to integrate the Bloch Collection into its existing collections to keep the work on permanent view.

This year also marks the 10th anniversary of the Bloch Building, a 165,000-square-foot expansion designed by Steven Holl. The expansion increased the museum’s permanent collection space by 71 percent and boosted average annual attendance by 42 percent to over half a million visitors each year, also encouraged by their 15 year free admission policy.

One of the leading encyclopedic museums in the country, the Nelson-Atkins is recognized for its European collections, which contain more than 1,100 works of art ranging from the medieval period to the early 20th century, including works by Caravaggio, Rembrandt, El Greco, and one of only 25 authenticated paintings by Hieronymus Bosch in the world. The Bloch Collection diversifies and deepens the Nelson-Atkins’ Impressionist and Post-Impressionist holdings, which include masterpieces by Edouard Manet, Claude Monet, Vincent van Gogh, Paul Gauguin, Paul Cézanne and Henri Matisse.

With the renovation of the galleries, the Bloch Collection will be incorporated into the museum’s permanent collection of European art.

The Bloch Collection made its public debut during the 2007 opening of the Bloch Building and was promised to the museum in 2010 in celebration of the Nelson-Atkins’ 75th anniversary. Henry and Marion Bloch started their collection over 40 years ago.