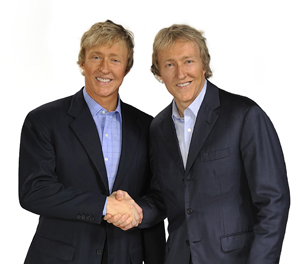 HIGH POINT, N.C. (ACNI) – Antique furniture experts and TV celebrities Leigh and Leslie Keno have another hit on their hands. The identical twin brothers best known from their on-air appraisals on PBS Television’s Antiques Roadshow have been on the road, stumping their upscale new range of furniture produced in partnership with the North Carolina manufacturer Theodore Alexander.

“We are very excited to be partners in this venture,” Leigh said in an e-mail sent to Auction Central News while waiting to board a plane in Florida. “They have given us total freedom to stretch the boundaries of our imagination. The level of craftsmanship is tremendous.”

Technically, Leigh and Leslie Keno soft-launched their promotional tour of the Keno Bros. Collection™ at Selden’s Home Furnishings in Tacoma, Wash., on Nov. 4, 2010. Scott Selden, president of Selden’s, remarked that the brothers’ appearance was “one of the most successful private events” his company had ever hosted. “The draw of the Keno brothers was key to the event’s success and attendance,” he said. “Their presentation caused a flurry of sales that night immediately following the presentation…they really connected with the audience.”

The brothers’ grand tour is now in high gear. Last week Leigh and Leslie appeared at three sold-out events for Robb & Stucky furniture stores in Florida. “We had a great launch in Naples today and in Boca [Raton] yesterday! Great people and, happily, lots of excitement,” Leigh wrote in his e-mail.

The Kenos’ next confirmed engagements in connection with the new furniture line are:

Additional appearances are expected to be added in the coming weeks and months.

The Keno Bros. Collection™ is carried by luxury furniture retailers throughout North America, Europe and Asia. It consists of approximately 100 pieces, all hand made from sustainably sourced exotic woods, stone, glass and metals. Because Theodore Alexander has not only its own furniture factory but also its own foundry, even the hinges incorporated into the designs are custom designed and crafted for the collection.

Leigh and Leslie, who both have dealt in the highest of high-end American furniture, were insistent that the range of furniture bearing their name should be uncompromising. They weren’t disappointed. “The quality of craftsmanship is just tremendous,” Leigh told ACN.

Because they have such a thorough knowledge of furniture, the brothers were able to offer suggestions to Theodore Alexander craftsment that resulted in improved designs. An example would be their Slope Chair. The lines of the back, seat, arms and legs appear to have been hewn from a single piece of wood, with the arms terminating in a wonderfully smooth, tactile shape that Leigh describes as being like “holding hands with the chair.”

The Sampler Table is one of Leigh and Leslie’s favorites because it showcases 14 different wood species in a single cocktail-size table.

The twins’ love of vintage race cars even made its way into the furniture line. From fine racing vehicles from the mid-20th century, the brothers drew the inspiration to include hand-hammered metalwork on their Flying Buttress tables.

Their Fine Point I table is clearly inspired by classic 18th and 19th century French and English pieces. It is devoid of ornamentation, but the serpentine shapes and exotic African ofram veneer create great movement and interest. As the brothers describe it, “This table embodies the essence of the S-shaped line which the British artist and philosopher William Hogarth called the ‘line of beauty.’ This line is based on the curves of the human body. Multiple curves with their undulations, peaks, and dips lead the viewer’s eye on a chase.”

“We offer a fresh and bold new spin on the Rococo table form in two rich shades of ofram veneer,” the brothers continued. “When we saw the prototype in the design state, we loved the color of the ofram in its natural, unstained state. We had never seen anything quite like this in our careers. The dark striations contrasting with the lighter ‘canvas’ complement the curves of the table.”

Leigh and Leslie are hopeful that one day the pieces in their new range of furniture will be viewed as heirlooms. View the range online at www.theodorealexander.com. Click on “Locate a Dealer” to find your nearest retailer carrying the Keno line.

About Leigh and Leslie Keno:

The Keno brothers achieved celebrity status as appraisers on the highly rated PBS show Antiques Roadshow. In 2003-2004 they were hosts of the PBS show Find! Since 2008 they have also hosted the show Collect This! with the Keno Brothers on MSN. Aside from their television duties, Leigh owns and operates Keno Auctions in New York, while Leslie serves as senior vice president and director of American Furniture and Decorative Arts at Sotheby’s in New York. The brothers are also accomplished writers, authoring a book on antiques called Hidden Treasures: Searching for Masterpieces of American Furniture. They have written monthly furniture and design columns for House Beautiful and This Old House and are often featured in Traditional Home. 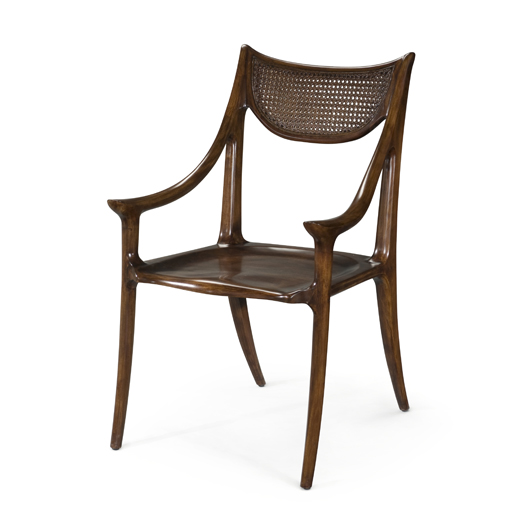 Chair known as The Slope, designed by the Keno Bros. Image courtesy of Theodore Alexander. 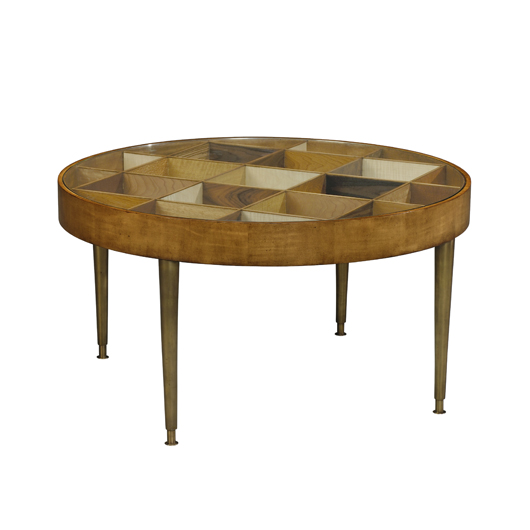 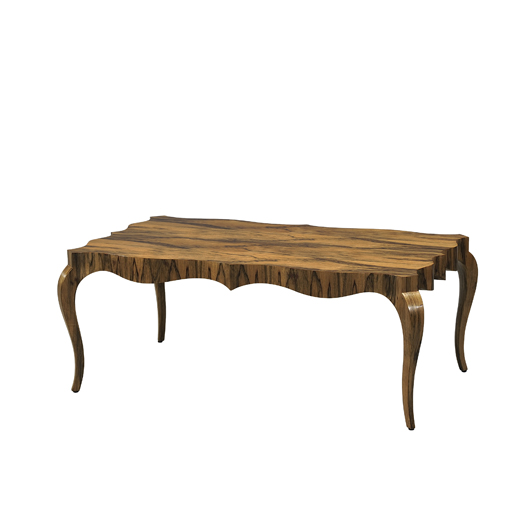 The Fine Point I Table, designed by the Keno Bros. Image courtesy of Theodore Alexander. 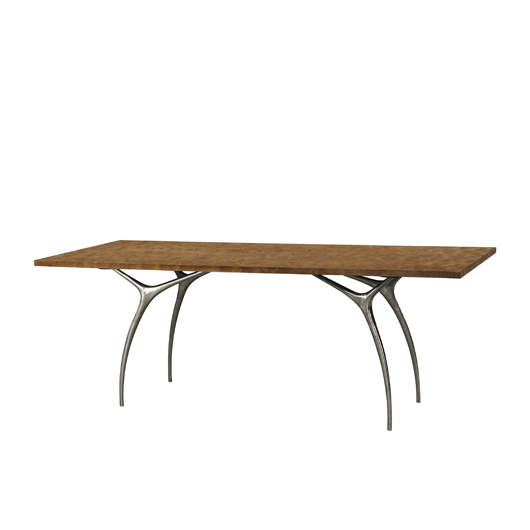