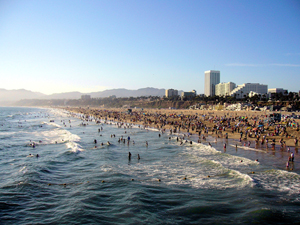 SANTA MONICA, Calif. (ACNI) – Following the ouster of long-ensconced antiques dealers at London’s Antiquarius Market, who have been forced to relocate so an Anthropologie chain store can move in, art dealers a world away at Santa Monica’s Bergamot Station Arts Center are nervously dealing with their own battle against “progress” and the wrecking ball.

Ironically, it is not civil engineers or government developers who pose the threat to Bergamot Station; it’s certain residents of the picturesque beach community in western Los Angeles County.

Municipal authorities previously advised the 30+ galleries and other businesses located in the artsy Bergamot Station enclave – including the Santa Monica Museum of Art and Santa Monica Auctions – that Bergamot has not been ruled out as the potential site for a light-rail maintenance yard. If tapped for this particular use, the complex, with its distinctive, loft-style buildings and contemporary vibe, would be razed.

“Previously, we had been told that at any time the property could be taken back and we would have to move,” said Robert Berman, Santa Monica Auctions’ owner and a 15-year business resident at Bergamot. Some members of Santa Monica’s City Council have sided with the dealers, according to Berman. “They’ve told us they love Bergamot, and that they want it to stay exactly as it is.”

Situated on eight acres only minutes from the Pacific Ocean, Bergamot Station began its life in 1875 as trolley car stop for the Red Line, which ran from Los Angeles to the Santa Monica Pier. When the trolley cars stopped running in 1953, the warehouses on the station’s site were converted to commercial use, first as a celery packing operation, then an ice-making plant, and finally as a factory for the manufacture of water heaters.

In 1989, the City of Santa Monica purchased the Bergamot Station property from Southern Pacific Transportation Co. for $17.3 million. With its massive corrugated-metal buildings, it was a natural for the display of large canvases and other artworks, and a plan to develop the property as a campus-like complex of arts-related businesses was enacted. In September 1994, Bergamot Station began its new life as a center for contemporary art galleries and design firms.

Plans have been under development for several years, now, to initiate light-rail service between Los Angeles to Santa Monica with the establishment of an Expo Line Phase II stop at Bergamot Station. From the beginning, Bergamot’s dealers have supported the idea, which is expected to stimulate business by increasing the number of visitors coming to their galleries. At the same time, the Expo Light Rail project would provide much-needed relief from the ever-growing congestion on the I-10/Santa Monica Freeway, one of the busiest travel corridors in the country.

The train-line expansion plan took an unpleasant turn in March, however, after a contingent of Santa Monica residents began voicing their objections to the proposed use of an industrial property in their neighborhood – formerly a Verizon plant – as a maintenance yard for the soon-to-arrive light-rail trains. Unhappy over the prospect of additional noise and pollution coming to their low- to moderate-income neighborhood, the residents suggested an alternative site for the maintenance facility: Bergamot Station.

Michael Tarbet, a spokesman for the tenants, told the Los Angeles Times, “I’m really supportive of the train coming through, and I love going to the art shows at Bergamot Station, but it’s only fair to look at it as a possible alternative. This is the only minority community in town, and it seems unfair to burden it again.”

Within Santa Monica’s arts community, the Bergamot Station idea was about as popular as a sewage outfall at a surf beach, igniting a firestorm of protests. Gallery owners and other Bergamot tenants took action and organized a letter-writing and e-mail campaign to call public and media attention to their plight. Even bloggers got involved. “How many vacant buildings and blighted areas are there in the Greater Los Angeles area?” one wrote. “Why take away something that is vibrant and turn it into a stagnant depository?”

Neither the Expo Line’s directors nor the Santa Monica City Council expected the avalanche of objections that ensued. Reportedly, 947 business owners and residents in the Bergamot Station area fired off hot letters to officials, expressing their displeasure over the idea of an unsightly industrial yard displacing their visitor-friendly arts center.

The dealers’ grassroots campaign, with its increasing momentum, inspired action from Santa Monica City Councilman Kevin McKeown, for one, who wrote an open letter to area art dealers reassuring them that the idea of converting Bergamot Station to a railroad yard was “a non-starter.”

Likewise, the Expo Construction Authority (ECA) – whose clout cannot be overstated – has not supported, suggested, or even hinted at the idea of accessing Bergamot Station’s arts complex.

Auction Central News contacted Gabriela Gonzalez, ECA’s Government and Community Relations Relations Manager to ask about the status of Bergamot Station as a possible site for the light rail maintenance yard. Gonzalez was emphatic in her response.

“We are the planning agency for this project. We have been proposing a particular site for this purpose, and it is not Bergamot Station,” she said. “The idea of using Bergamot Station was suggested by residents who live in the area near the old Verizon property. [Bergamot Station] has not been proposed or studied and is not even mentioned in the environmental report we drafted.”

While its dealers are optimistic that Bergamot Station’s value to the arts community will be viewed as far outweighing its usefulness as a train maintenance yard, they remain uneasy, wondering if and when the other shoe will drop in the nervewracking saga, and if they’ll have any further say in the matter when it does. Some believe that if they had “sat silent,” as one dealer put it, the maintenance-yard proposal might have advanced quietly to the stage of environmental-study status, at which point their objections would have been too little, too late.

Bergamot Station attracts more than 600,000 visitors per year. One of its strongest points is ease of accessibility. In one central location art aficionados can park their car for free – or in the near future, disembark a train – dine or enjoy an espresso with friends, and spend the entire day viewing, purchasing or bidding on artworks without having to drive from one place to the next. Visit Bergamot Station online at www.bergamotstation.com.

Rail museum moving from Dallas to the suburbs

Wright’s June 2 sale goes ‘back to the Futuro’ with Suuronen...
Scroll to top