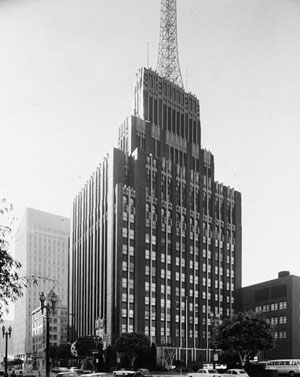 LOS ANGELES (AP) – The population of winged guardians in the City of Angels is not what it was.

A downtown Los Angeles resident wants to find out what happened to dozens of terra-cotta angel sculptures that once adorned a landmark downtown building that was demolished in 1969.

The Richfield Building, a black and gold Art-Deco tower, which was built in 1929 and served as the headquarters for Richfield Oil Co., was festooned with 40 golden angels wearing roman helmets and breastplates. The 10-foot-tall majestic sentries gazed down on the city from the 13-floor building.

When office tower at 555 S. Flower St. was torn down to make way for a generic-looking high-rise complex, the angels were removed and offered for sale for $100, and one of them was bought by an Orange County family.

Local historian and urban anthropologist Eric Lynxwiler heard the family was selling the sculpture, so he bought it for $2,500 and attempted to bring it back to his downtown loft in a truck.

“I ended up hiring a crane and a forklift,” Lynxwiler told the Los Angeles Times. “The crane operator weighed it and found it was 1 1/2 tons, so I had to have a special base made to hold it. Altogether, it ended up costing $10,000.”

Lynxwiler, 37, wants to know what happened to the other angels. He speculates that some could have ended up amid the rubble from the demolished building that was used to construct Los Angeles-area freeways.

A pair of ornate elevator doors from the Richfield Building were saved and incorporated into one of the high-rise ARCO Plaza towers now standing on the site. The University of California, Santa Barbara, has four of the old building’s front door ornaments.