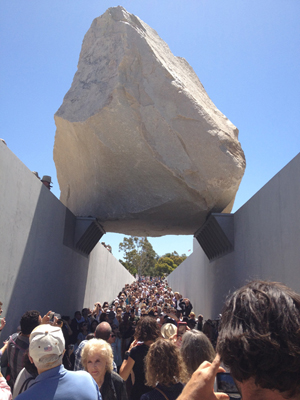 Michael Heizer’s sculpture ‘Levitated Mass’ as seen from within the trench. Image by Marjobani. This work is licensed under the Creative Commons Attribution-ShareAlike 3.0 License.

LOS ANGELES (AP) – The rock was the star as the Los Angeles County Museum of Art pulled the covers off artist Michael Heizer’s latest creation—a 340-ton boulder positioned to appear as though it’s floating in midair.

About a thousand people showed up under sunny skies in Los Angeles as the gigantic work titled Levitated Mass was unveiled Sunday on LACMA’s backyard, where it is intended to remain forever.

Its centerpiece is the two-story-tall chunk of granite that was hauled 105 miles from a Riverside rock quarry earlier this year. Since then, the rock has been carefully positioned above a 465-foot-long trench that museum visitors can stroll.

From the trench, the rock appears to be hovering overhead.

The 67-year-old Heizer, who rarely appears in public, was on hand for the ribbon-cutting ceremony and led the first procession under the big rock. Along the way he waved and shook hands with museum officials and art enthusiasts.

Also Sunday, the museum opened “Michael Heizer: Actual Size,” an exhibition of more than a dozen gigantic photographs showing other works by the artist.

Heizer may be best known for Double Negative, a 1,500-foot-long land sculpture cut into a desert mesa in southern Nevada.

Heizer has planned for more than 40 years to create Levitated Mass, but had to locate the perfect rock. He finally found one in a quarry on the outskirts of Riverside about seven years ago.

It took dozens of people and a specially built trailer to haul it over the surface streets of 22 cities.

The trip lasted nearly two weeks, with the rock traveling only at night and rarely faster than 5 mph. Thousands of people turned out to cheer it on.

To thank those who put up with road closures and other delays, the museum is granting free admission for a week to people who live in areas traversed by the rock. 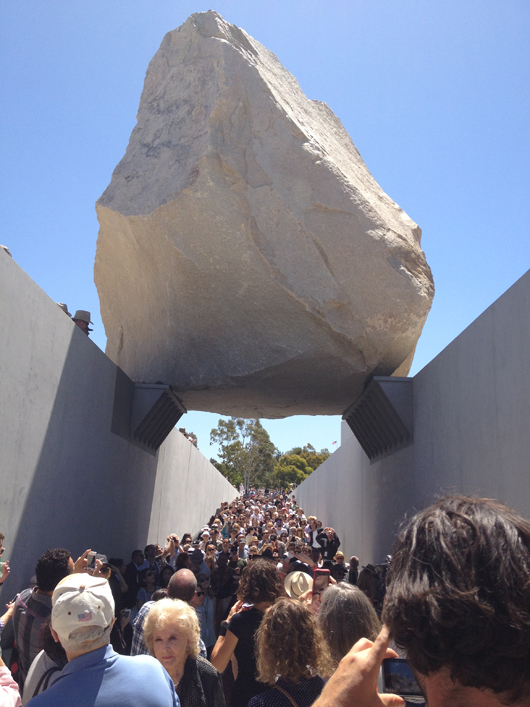 Michael Heizer’s sculpture ‘Levitated Mass’ as seen from within the trench. Image by Marjobani. This work is licensed under the Creative Commons Attribution-ShareAlike 3.0 License.