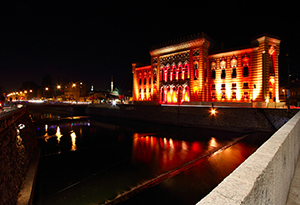 National library of Bosnia-Herzegovina at night. Image by Natalino7. This file is licensed under the Creative Commons Attribution-Share Alike 3.0 Unported license.

SARAJEVO, Bosnia-Herzegovina (AP) – Sarajevo reopened Friday its reconstructed National Library building 22 years after the city landmark was destroyed during the Bosnian war along with its almost 2 million books and manuscripts.

The reopening comes in time for the June ceremonies marking the centenary of the assassination that ignited World War I.

City authorities plan to have the Vienna Philharmonic Orchestra perform inside the building on June 28, marking 100 years since Austro-Hungarian Crown Prince Franz Ferdinand von Habsburg walked out of the building and was shot dead by a Serb.

It took architects and builders 18 years to find documents and photos on the building’s 19th-century construction and put it back together the way it was before Serb shelling destroyed the landmark in 1992.

The building had no military significance and the library ruin turned into a symbol of what Sarajevans called “urbicide” – a term they used to describe primitive attackers destroying cultural achievements.

The repainting of 2,000 square meters (21,530 square feet) of arabesques on walls and ceilings took a year.

The reconstruction represents a victory “of life over death” and a proper answer “to those who thought they could burn libraries, kill people and destroy cities,” Bosnian President Bakir Izetbegovic said.

The library served first as the city hall when it was originally built 118 years ago by the Austro-Hungarian Empire in pseudo-Moorish style to reflect the multicultural character of a city in which the East and the West coexist.

The European Union contributed more than half of the reconstruction cost of more than 16 million euros ($22.05 million).

“This is about restoring the densely woven intellectual tapestry of our continent – a tapestry of diverse cultures and beliefs and peoples,” said Bosnia’s international administrator, Austrian diplomat Valentin Inzko. 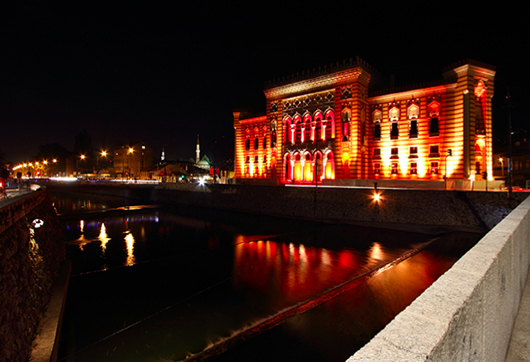 National library of Bosnia-Herzegovina at night. Image by Natalino7. This file is licensed under the Creative Commons Attribution-Share Alike 3.0 Unported license.