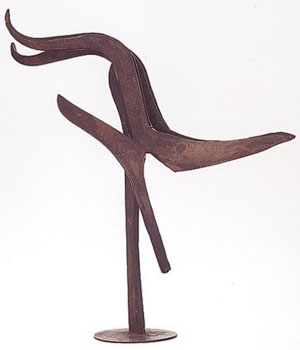 This one’s made of metal and was swiped from a downtown sculpture in 1961 as a prank by University of Oregon students. It was torn off the iconic bronze salmon sculpture in the downtown Park Blocks fountain at East Eighth Avenue and Oak Street almost a half-century ago.

Jane Harrison, a Eugene resident, read in the newspaper about the fountain sculpture being renovated and decided it was time to return the fish. Harrison says a college friend of her ex-husband took the fish and gave it to him.

“He said they were out partying,” Harrison recalled. “They ‘rorked’ the fish off.”

They in turn gave it to her mother in Coquille who kept it in her garden for years. While helping clear out her mother’s house last year, Harrison spotted the fish.

Harrison’s act has prompted the city to offer amnesty through Oct. 8 to anyone who turns in pilfered artwork, including other fish broken off the fountain sculpture.

It was 1961 and the elaborate and impressive artwork by Thomas Hardy, a University of Oregon graduate and internationally renowned sculptor, had only been in the fountain for two years, since the Park Blocks were constructed in 1959.

The alleged friend (whom Harrison would not finger) and others apparently had been drinking that night when they wrenched off and stole one of the 100 or so bronze salmon from the almost 19-foot-long sculpture.

Asked if maybe this was just a wild (fish) tale she was telling to cover her own long-ago crime, Harrison, who retired in 2001 as principal of Kelly Middle School, laughed and said no.

“I’ve ‘rorked’ other things, but not that one,” she said.

“Why (the friend) gave it to my ex-husband, I have no idea,” said Harrison, standing in Steve Reinmuth’s Bronze Studio in west Eugene, where Reinmuth has spent the past month refurbishing the late Hardy’s piece. He plans to reinstall it this week.

Harrison read about the renovation project and how for the second time in its life the sculpture had fallen into disrepair, and that Reinmuth had been hired to fix and refinish it this time since Hardy is no longer living.

A University of Oregon student at the time, Harrison and her ex were living in an apartment on Ferry Lane in 1961. They didn’t have the bronze fish in their possession for very long before they gave it to Harrison’s mother in Coquille. She put it next to a fountain in her garden, where it stayed until last year.

Harrison’s mother died in 2001, but her husband, Harrison’s 97-year-old stepfather, was still living there last year and gathering things to move into an assisted living center, when Harrison spotted the bronze fish in an empty planter box.

She thought the poor fish needed to come back to Eugene. So she brought it back with her. And when Harrison read about the renovation of the sculpture last month, she found Reinmuth’s Web site and sent him an e-mail wondering whether any fish were missing from the sculpture.

“We were always told it was the lead fish (on the sculpture),” Harrison said.

Actually, the lead fish has been just fine all these years, said Reinmuth, who found a broken weld on the sculpture where he reattached the piece Harrison gave him. It’s a different color, a lighter shade, than the other pieces, he said.

“It’s been in a different environment,” Harrison said.

The salty sea air in Coquille would have had a different effect on the bronze over five decades, Reinmuth said.

“I’m just glad that it’s back where it belongs with the rest of the fish.”

Information from: The Register-Guard,

Salmon labels — A prize catch from the Great Northwest