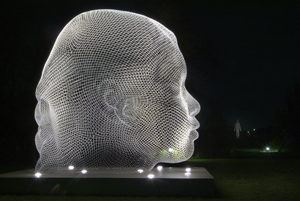 DALLAS – The Meadows Museum at Southern Methodist University has announced its acquisition of Sho, a monumental sculpture by contemporary Spanish artist Jaume Plensa (b. 1955). Completed in 2007, the work represents a female head and is formed by white-painted stainless steel openwork mesh. It stands approximately 13 feet tall and 10 feet wide and weighs 660 pounds. This sculpture acquisition from the Richard Gray Gallery was made possible with the generous support of The Pollock Foundation, the Family of Mr. and Mrs. Richard R. Pollock, and the Family of Mr. Lawrence S. Pollock, III, in honor of Mrs. Shirley Pollock, and will be matched with a 1:1 challenge grant for museum acquisitions from The Meadows Foundation.

Plensa is known for his monumental figural sculptures that often incorporate film, light, letters and unusual materials in order to present familiar objects (such as the human body) in unfamiliar ways. Sho is an excellent example of Plensa’s mastery of his medium. It is a portrait of a young Chinese girl, Sho, whom the artist met in Barcelona where his studio is located. The undulating curves of the girl’s facial features and braided hair are emphasized, especially in profile, demonstrating the artist’s characteristic experiments with the interplay of large scale and intimacy in three-dimensional representations of the human form.

A native of Barcelona, Plensa had his first solo exhibition in 1980 and has since achieved international acclaim. Although his primary studio is in his native city, Plensa has also lived and worked in Berlin, Brussels, England (at the invitation of the Henry Moore Foundation), and France (at the invitation of the Atelier Alexander Calder). His numerous awards and honors include the Chevalier des Arts et Lettres from the French Minister of Culture, the National Art Award of Catalonia, Spain, and an honorary doctorate from the Art Institute of Chicago. Plensa has exhibited in major museums and galleries worldwide, including the Galérie Nationale du Jeu de Paume in Paris; the Henry Moore Sculpture Trust in Halifax, England; Museo Reina Sofía, Madrid; Museum der Modernen Kunst, Vienna, and in New York, Chicago and Tokyo. Outdoor and public sculpture is an equally important aspect of Plensa’s output, with numerous installations in North America, Europe and Asia. One of his most notable works is Crown Fountain (2000-04) in Chicago’s Millennium Park, arguably one of the most successful public art projects of the past decade. Plensa’s works are also found in the collections of such notable museums as the Nasher Sculpture Center, the Art Institute of Chicago and the San Francisco Museum of Modern Art, among many others.

Sho was first exhibited at the Institut Valencià d’Art Modern (IVAM) in Valencia, Spain, in the winter of 2007. It was the centerpiece of a mid-career retrospective exhibition of Plensa’s work and served as the cover illustration for the accompanying catalogue. The work then traveled to Chicago, where it was exhibited along the riverfront in the heart of downtown, and to Grand Rapids, Michigan, where it was included in a major exhibition of the artist’s latest work at the Frederik Meijer Gardens and Sculpture Park through early January 2009.

“Sho marks the most important acquisition of a work by a living artist into the Meadows collection since the commissioning of Calatrava’s Wave in 2001,” said Dr. Mark Roglán, museum director. “Plensa is among the most dynamic and talented artistic minds in Spain today, and we are honored to have him represented at the Meadows with such a unique and monumental sculpture. This one of a kind masterpiece will welcome visitors to the museum from its prominent position in the center of our new entrance plaza, due to open this fall. The acquisition, made possible by the Pollocks and The Meadows Foundation, further represents a beautiful way to honor in perpetuity the memory of the late Shirley Pollock, who was such a great friend of this institution.”

The Museum will present a public lecture about Plensa by art historian and critic Barbara Rose on November 12, and additional public programming is planned throughout the year.

Sho will go on permanent display outdoors on the museum’s newly renovated entry plaza as part of the exhibition “Face and Form: Modern and Contemporary Sculpture in the Meadows Collection,” opening October 7, 2009. The exhibition will highlight the Meadows Museum’s distinguished collection of modern and contemporary sculpture from the 19th to the 21st centuries, which includes works by such artists as Auguste Rodin, Aristide Maillol, Jacques Lipchitz, Marino Marini, Henry Moore, Claes Oldenburg and David Smith. The sculpture collection will be featured both outdoors on the plaza and indoors in the Jake and Nancy Hamon Galleries.

About the Meadows Museum

The Meadows Museum, a division of SMU’s Meadows School of the Arts, houses one of the largest and most comprehensive collections of Spanish art outside of Spain, with works dating from the 10th to the 21st centuries. It includes masterpieces by some of the world’s greatest painters: El Greco, Velázquez, Ribera, Murillo, Goya, Miró and Picasso.

The museum is located at 5900 Bishop Blvd. on the campus of SMU, three blocks west of the DART light rail Mockingbird Station. Hours are 10 a.m. to 5 p.m. Tuesday, Wednesday, Friday and Saturday; 10 a.m. to 8 p.m. Thursday; and 12-5 p.m. Sunday. Admission is $8 per person, $6 for seniors, free on Thursday evenings after 5 p.m., and free for children under 12, museum members, and SMU faculty, staff and students. Ample free parking is available in the museum garage. For information, call 214.768.2516 or visit www.meadowsmuseumdallas.org.