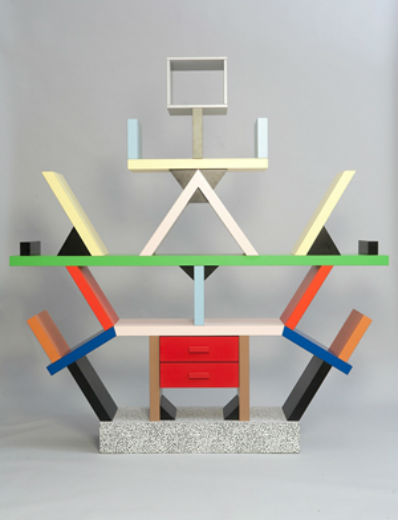 The most recognizable furniture icon from the Memphis Group may be Ettore Sottsass’s 1981 Carlton Room Divider, constructed of plastic laminate. The design perfectly illustrates the style’s vivid colors and defiance of conventional functionality. The Metropolitan Museum of Art © Ettore Sottsass

NEW YORK – A seminal figure in 20th-century design, Italian architect and designer Ettore Sottsass (1917–2007) created a vast body of work, the result of an exceptionally productive career that spanned more than six decades. The exhibition at The Met Breuer, “Ettore Sottsass: Design Radical,” opening July 21, will reevaluate Sottsass’s career in a presentation of his key works in a range of media—including architectural drawings, interiors, furniture, machines, ceramics, glass, jewelry, textiles and pattern, painting, and photography.

The exhibition will present Sottsass’s work in dialogue with ancient and contemporaneous objects that influenced his practice. This juxtaposition will offer new insight into his designs, situating him within a broader design discourse.

Perhaps best known for his work with the design collective Memphis in the 1980s, Sottsass’s work evolved over the course of his career from modernism to postmodernism. Born in Innsbruck, Austria and educated in Turin, Italy, Sottsass established his studio in Milan in 1947. In his early career, he designed iconic works that reflected a functional and rationalist approach, especially as Olivetti’s design consultant in the creation of the Elea 9003 mainframe computer (1958) and numerous machines and furnishing systems.

By the 1960s, Sottsass began to move away from his own modernist beginnings in favor of qualities beyond the functional: He created objects imbued with symbolism, emotional appeal, and global and historical references. Moreover, he infused modern design with a sensitivity for the human condition that many at the time felt modernism largely ignored. The shift in his ideology coincided with a broadening of influences gained through travel to the United States, where he worked briefly in the designer George Nelson’s office, and, especially, to India in 1961, as reflected in the works Ceramics of Darkness (1963) and Tantric Ceramics (1968).

The exhibition at The Met Breuer will highlight landmark projects, including five of the original industrial ceramic totems that comprised the Menhir, Ziggurat, Stupas, Hydrants, and Gas Pumps (1965–66) project displayed at the Galleria Sperone in 1967; the iconoclastic and minimalist “Superboxes” (begun 1966); and the “Environment”—a system of modular cabinets for MoMA’s 1972 exhibition Italy: The New Domestic Landscape. Designed as a conceptual prototype/provocation in the 1970s spirit of questioning social norms, the “Environment” proposes liberation from traditional architectural structures and the social values associated with home ownership in favor of an open-source shared domestic utility catering to a more nomadic or communal existence. This sequence of visionary projects introduced many of the concepts, materials and techniques that informed the founding of Memphis in 1981.

Sottsass and a small international group of like-minded designers called themselves Memphis in a nod to the Bob Dylan song Stuck Inside of Mobile with the Memphis Blues Again, the ancient capital of Egypt, and the modern city in Tennessee. The collective produced furnishings that were a radical departure from accepted design conventions by reinterpreting design’s basic elements: function, form, material, surface and color. The totemic Carleton” Room Divider from 1981 is an outstanding example; its visually disjointed form is antithetical to neatly ordered conventional bookcases. Sottsass justified the odd angles by claiming that books never stand straight anyway. Like Memphis, “Carleton” self-consciously embodies pop and vernacular references that play with perceptions of high and low—veneered in plastic laminates like those used on countertops of the 1950s but constructed using fine cabinetmaking techniques. While marketed and priced beyond the reach of average consumers, the example demonstrates Memphis’s insistence on a designer’s creativity and agency to determine the final product, a value that today contributes to the blurring of the art and design markets and the rise of “collectible design.”

“Masters,” the final section of the exhibition, will present selections of Sottsass’s lesser-known late work in dialogue with pieces by four important 20th-century artists and designers: Piet Mondrian, Jean Michel Frank, Gio Ponti, and Shiro Kuramata. Sottsass’s writings, which often reference the objects that influenced him, appear throughout the exhibition. The inclusion of Frank’s Low table (1983) and a few examples of Sottsass-influenced contemporary design serve as formal comparisons that elucidate basic design and aesthetic principles and how Sottsass diverged from them to become a true design radical.

The exhibition runs through Oct. 8.

Korean Ceramics from Leeum Collection at The Met, starting April 7