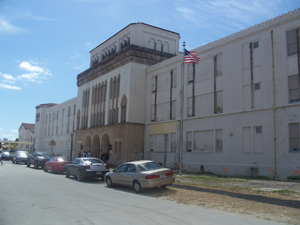 A new parking garage will eliminate congestion at the entrance of Miami Senior High School. This file is licensed under the Creative Commons Attribution-Share Alike 3.0 Unported, 2.5 Generic, 2.0 Generic and 1.0 Generic license.

MIAMI (AP) – Miami was barely a city when it built its lone high school a new, grand edifice in the Moorish style. With its notched parapets and towers, its ornate Medieval filigree, arched windows, enclosed courtyards and soaring interiors, the 1928 Miami High campus was a veritable Alhambra of learning at the rapidly receding edge of the Everglades.

In the decades since, Miami High has stood as a beloved civic landmark. The building, which would not be out of place at an Ivy League university, served the children of the first wave of Miami’s explosive growth and, in later years, the children of Cuban exiles and countless immigrants.

Yet the imposing old school had also gradually fallen into disrepair and been marred by patchwork renovations, ill-conceived alterations and cheap, make-do additions.

The worst was the installation of air-conditioning in the 1960s: Ductwork was rammed through decorative vent screens, many of the school’s arcades and 995 windows were blocked, and dramatic, cathedral-like spaces disappeared behind dropped ceilings.

Now, for the first time in nearly 50 years, those hidden riches are being revealed once again, as part of a four-year, $50-million renovation and expansion project that aims to restore Miami High’s architectural grandeur while modernizing the 15-acre campus for its second century.

“Historically it’s the most important school building in this community,” said Victor Alonso, director of design and sustainability for Miami-Dade County public schools. “We have few public or even private buildings of this importance. And the quality of the construction and the design is just magnificent. It’s a real treasure.”

As a bonus, the architects working on the renovation have retrieved a 1937 Works Progress Administration canvas mural from the humid storage space where it had been stashed out of sight for decades.

The monumental, 40-foot-long painting had been removed from the library wall during the AC installation, cut into three pieces and rolled up, creased and damaged. School administrators hope to raise thousands of dollars for the mural’s repair and re-installation.

The building is the fourth to house Miami High, founded in 1902 as the city’s first secondary school. Its first home, a modest wooden bungalow, is, miraculously, the only other of the four to survive. It was discovered in 1983 in use as a residence in West Brickell and eventually moved to nearby Southside Park. Meticulously restored, it reopened in 2009 as a community center.

The current building was designed by Richard Kiehnel, one of the most important early architects in Miami. Kiehnel, from Pittsburgh, first came to Miami to design a home for a steel magnate. Known as El Jardin, it is today part of the Carrolton School in Coconut Grove, and introduced the Mediterranean Revival style to Miami.

Kiehnel is responsible also for several other enduring landmarks, including the Coconut Grove Playhouse, Coral Gables Elementary School and Coral Gables Congregational Church – all, like Miami High, on the National Register of Historic Places.

But he may have outdone himself with Miami High, a blend of Moorish influence from southern Spain and Gothic and Byzantine elements. The piece de resistance: a vast auditorium with elaborate decorations and windows fit for a Medieval cathedral.

Halfway through the renovation, designed by Zyscovich Architects, Miami High has three new classroom wings to relieve overcrowding. Two of those wings, in a stripped-down, neo-Mediterranean style to complement but not compete with the original, flank the parking lot on Flagler Street at the front, standing detached from the historic original.

What remains of the parking lot will become a lot more like a park, with new trees, a broad green space and a double line of Royal Palms leading to the school’s triple-arched front entrance.

The third new wing is a gently curving, clean, three-story modern building attached to the original at the rear that doesn’t attempt to emulate the historic portion in any way. A parking garage for staff and faculty has been built where a driving range once was.

With students now housed in the new wings, the real work of restoration finally got underway in mid-summer.

The main building’s original two side wings, constituting roughly half the original structure, have been closed down and are in the process of being stripped to their original skeletons – or “detoxification,” in the words of preservation architect Thorn Grafton. Unsympathetic additions are being torn down, windows and arcades are being unblocked and the offending dropped ceilings and AC ducts ripped out.

For anyone who was not inside the school before the 1960s, it’s a revelation: In the library, or media center, the removal of the acoustical ceiling has revealed 14-foot arched windows and a peaked ceiling spanned by awe-inspiring steel trusses decorated with curlicues and scrollwork, which Alonso speculates must have originated with Kiehnel’s Pittsburgh connection.

“You just don’t find anything like this anywhere else in Miami. In New York and Chicago, yes, but not in Miami,” he said.

A graceful arcade running alongside the library, once blocked up, has been reopened.

In the old western wing, too, the drop-ceiling removal has revealed cathedral ceilings, muscular steel trusses, and a row of light-infusing windows running along the very top. In both wings, new AC ducts will be left exposed so that the trusses and ceilings can be seen.

The demolition work has also revealed the scars left by the AC project – jagged holes in walls and the decorative, cast-stone vent covers.

“What was done in the ’60s was a sin,” Alonso said. “There was a real disregard for the significance of the architecture and design and history of the school.”

Luckily, many if not most of the original architectural details remain more or less intact, including more than 60 cast-stone pieces that frame and define windows, columns, walls and cornices.

Those missing or damaged will be reproduced, based in part on an extensive collection of historic photos. Arcade floors of red quarried tile were found unscathed beneath a layer of concrete. Original floorboards of Dade County Pine are being salvaged for reuse.

“Part of the fun of this project is solving those mysteries: What’s under that wall? What did it look like originally?” said William Barimo, director of facilities design for the schools.

In the next phase, Alonso, Grafton and Barimo will tackle the main building and the auditorium, which will get new lighting and sound. New fire-safety systems will permit elegant open stairwells blocked up for years to be reopened and hallways restored to their original heights.

To some alumni’s regret, change is also coming to the school’s famed gym, best known as The Asylum. For years, a lack of air-conditioning proved a competitive advantage for the Stingarees as opposing teams wilted in the heat and noise generated by the place. State law, alas, requires it be air-conditioned.