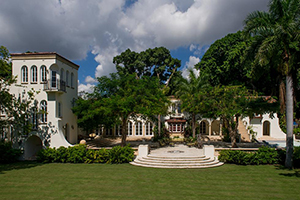 Miami’s most expensive property, La Brisa, is located in Coconut Grove and is listed at $65 million. Image provided by toptenrealestatedeals.com

MIAMI – Coconut Grove, just minutes from downtown Miami, was first inhabited in 1825 when the lighthouse on Key Biscayne began operating. A small village at the edge of Biscayne Bay, it developed slowly until 1886 when Charles and Isabella Peacock settled there and opened Bay View House, which later was renamed the Peacock Inn. Now with accommodations for visitors, “The Grove,” as locals call it, began to draw many interesting visitors, like scientists, artists, authors and even royalty, for the warm climate and bay location. Eventually, wealthy northerners arrived and built their winter mansions on the water’s edge in the midst of lush hammocks of live oaks and tropical vegetation, which still exist today. Notables who built their winter or permanent homes in The Grove include James and William Deering (John Deere), William Jennings Bryan (Secretary of State), Marjorie Stoneman Douglas (author and environmentalist) and Sepy Dobronyi (sculptor).

In the 1950s, Coconut Grove turned into an art colony when artists flocked there to paint its natural beauty. It began to take on a bohemian atmosphere, which, even today with all of its quaint shops and sidewalk cafes, still lies just below the surface. Treasured by the residents for the annual Coconut Grove Arts Festival, the Great Grove Bed Race and King Mango Strut, or just sitting on a bench at Dinner Key enjoying the sailboats, Coconut Grove has a colorful history and a no less colorful presence today. Newer residents include Sylvester Stallone and Madonna.

Now with luxury Florida condominiums overlooking Dinner Key Marina where elegant old Florida mansions used to stand, South Grove homes and mansions are still surrounded in privacy by manicured jungle and original coral rock walls. One of the most famous and historic bayfront residences is now for sale.

La Brisa (Spanish for “The Breeze”) is on a very rare 6.9-acre tract of waterfront land that has never been subdivided since it was created in 1886. La Brisa was built in the 1920s, owned over the years by Kirk Munroe, an author of children’s novels and books about Florida, and Henry Field, a grandnephew of the founder of the Chicago Marshall Field’s Department Store chain. It was the home where Howard Hughes recuperated after his 1946 California plane crash.

Just blocks to Dinner Key, La Brisa is only steps from restaurants and shops, though total privacy is ensured by the tall coral rock wall, wrought iron entry gates and winding road leading to the home. With 207 feet of waterfront on Biscayne Bay, the home is built atop an ancient coral reef approximately 23 feet above sea level. The home has been extensively restored with views of Biscayne Bay and the Atlantic across an expanse of well-manicured lawn stretching toward the mangrove-lined waterfront. Accessible by an elevated walkway leading to an octagonal viewing deck over the bay, a protected 536-foot long canal borders the northern side of the property and leads to a comfortable private port constructed by the current owner. The port accommodates a 70-foot yacht and offers direct ocean access.

The interior of the home measures 13,803 square feet with nine bedrooms and eleven baths. There are many balconies and covered porches encompassing an additional 3,338 square feet of year-round outdoor living space. All rooms are large and airy with some of the original beams, large fireplace and large eat-in kitchen, library, sauna and swimming pool and formal rooms, completely restored and updated. The Mediterranean-style home retains its original details of arched doors and windows, intricate keystones, and wrought iron. Gardens planted in Canary date palms, royal palms, royal poincianas, mahogany, oak and gumbo limbo trees, most of which are older than the house itself. There is also a rare spring-fed pond surrounded by tropical foliage.

La Brisa in historic Coconut Grove, home to artists, scientists, authors, celebrities and an astronaut, is now offered for sale at $65 million. 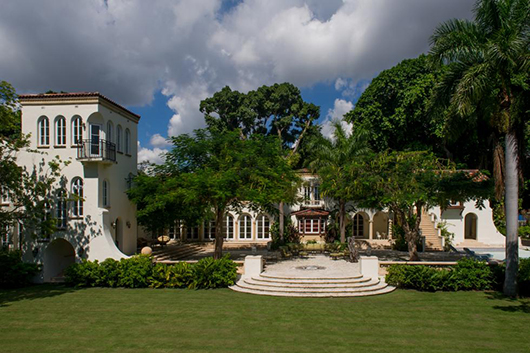 Miami’s most expensive property, La Brisa, is located in Coconut Grove and is listed at $65 million. Image provided by toptenrealestatedeals.com