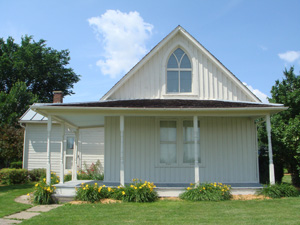 COUNCIL BLUFFS, Iowa (AP) – When Grant Wood was commissioned by Omaha hotel magnate Eugene Eppley to paint a series of murals in 1927 decorating the walls of two meeting rooms in Eppley’s Hotel Chieftain in downtown Council Bluffs, he was a relatively unknown Iowa artist.

Three years later, in 1930, Wood gained national and international fame with the unveiling of American Gothic, his most widely recognized work.

An Omaha art consultant believes that one segment of the mural Wood painted for the Hotel Chieftain’s Corn Room – a segment now owned by US Bank and put on loan to the Bluffs Arts Council – “previews the American Gothic.”

That segment of the mural, along with two others owned by the bank and loaned to the Bluffs Arts Council, was hung recently in the lobby of the Pottawattamie County Courthouse.

The 29- by 37.5-inch segment, which Wood and his assistant, Edgar Britton, had created on the north wall of the Corn Room is “completely identifiable with the artist,” according to Eileen Brown of Brown’s Art Consultants in Omaha.

“It previews the American Gothic, being rendered in a very cubist, stacked style and could not be mistaken for the work of any other artist, even if the signature was separated from the painting,” Brown wrote in her appraisal of the segment.

In visiting with Dick Miller, a former president of the Bluffs Arts Council and a driving force behind the current effort to collect and display the remaining segments of Wood’s Corn Room mural, about the US Bank segment, Brown commented she could see Wood “envisioning American Gothic” – “it was in his mind.”

The house seen in American Gothic is located in Eldon, and was a structure first seen by Wood in August 1930 on a car ride with John Sharp, an 18-year-old Eldon native and aspiring artist.

Wood’s trip to Eldon was part of an “artistic outreach” arranged by Edward Rowan, the director of the Little Gallery in Cedar Rapids. His goal was to promote fine arts in smaller communities.

In his book, American Gothic, author Steven Biel noted that Rowan, speaking at the American Federation of Arts convention in May 1931, commented, “It is noteworthy to recall that the particular house which prompted Mr. Wood to create his American Gothic was discovered by him on a visit to our Eldon experiment.”

But Rowan added that the idea for American Gothic had been “revolving in the artist’s mind for several years – but needed the particular impetus which he found in Eldon.”

And, like Rowan, Brown is confident the idea that had been “revolving in the artist’s mind for several years” is present in an early form in the 1927 Corn Room mural segment.

Information from: The Daily Nonpareil,

Miss. home offers look into the life of William Faulkner