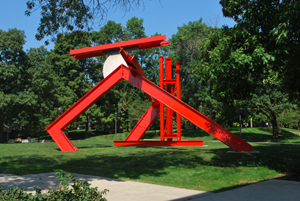 FORT WAYNE, Ind. (AP) – A large steel sculpture knocked over and damaged by a truck that barreled across the lawn of the Fort Wayne Museum of Art might return baring few scars from the collision.

The repair of the damaged “Helmholtz” abstract steel sculpture has entered a “scientific phase,” with the artist testing pieces to see if heat will return them to their original shape or if they need to be replaced, Charles A. Shepard III, executive director of the museum, told The News-Sentinel.

“The artist seems totally convinced it is going to look as good as new,” Shepard said after speaking frequently by phone recently with “Helmholtz” creator Mark di Suvero.

The 8-ton, 26-foot-tall sculpture made largely of steel I-beams was damaged June 16 when police say Colton Adamonis of Fort Wayne drove into it.

Early tests have shown di Suvero that he likely will need to replace a stainless steel disc on the sculpture, Shepard said. The collision bent the disc and it will be very difficult to flatten it to the correct circumference.

The museum hopes to get an estimated cost of the repairs in a few weeks. Those costs will be paid by the insurance policies of the driver and the museum, Shepard said.

“Helmholtz” probably won’t be repaired and returned to Fort Wayne until this spring, Shepard said.

The museum wanted di Suvero to make the repairs to preserve the artistic integrity of the piece as well as its market value, Shepard has said. The piece, which has been part of the museum’s collection since 1985, would have been valued at $1 million to $1.5 million before the damage.

A construction crew took apart the sculpture in early August so it could be shipped to di Suvero’s studio in Petaluma, Calif.

One factor complicating the repairs has been that di Suvero built “Helmholtz” before artists started using computer-aided design (CAD) technology, Shepard said. Instead of comparing pieces of the sculpture to their exact specifications on an original design, di Suvero must test pieces individually to see if they have been twisted or bent and what it would take to return them to original condition.

Information from: The News-Sentinel, http://www.news-sentinel.com/ns 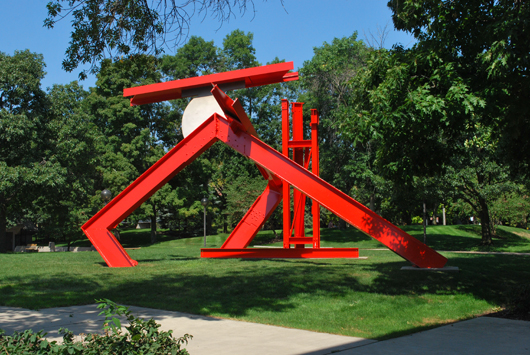 Chihuly glass to be centerpiece of Ind. museum show