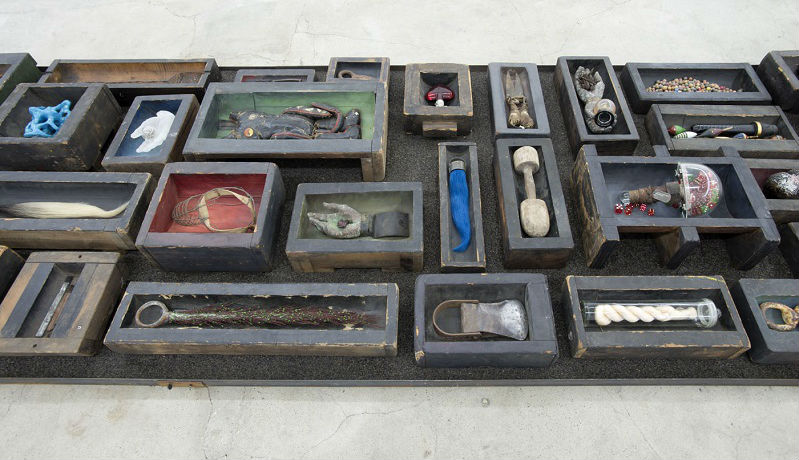 KANSAS CITY, Mo. – Property, a sculpture by Nick Cave, one of America’s foremost contemporary artists, has been acquired by the Nelson-Atkins Museum of Art and will be on view in the museum beginning July 23.

The sculpture, like Cave’s other celebrated works, explores issues of race, gender, oppression, identity and history. The expansive assemblage incorporates about 1,000 found objects that reference race and racism, recall African American life or hold strong personal meanings for the Missouri-born artist who attended the Kansas City Art Institute and is now recognized internationally.

Cave seeks to transform problematic objects through reuse and new contexts. The title Property suggests slavery as well as the life cycle of things sold, used and discarded. The most prominent element of the work is a standing figure adjacent to part of a shoeshine chair, which references racial stereotypes. The figure is embellished with flowers, bottles of perfume, beads and ceramic birds, suggesting a tree of life; hope and regeneration envelope oppression. On the floor, vintage mold boxes contain objects left unaltered or modified or enhanced by the artist.

“Nick Cave’s sculptures remind us that objects carry enormous emotional and social meaning,” said Julián Zugazagoitia, CEO and director of the Nelson-Atkins. “We are honored to add this powerful piece to our collection and to showcase Nick Cave’s work in the museum’s Project Space.” 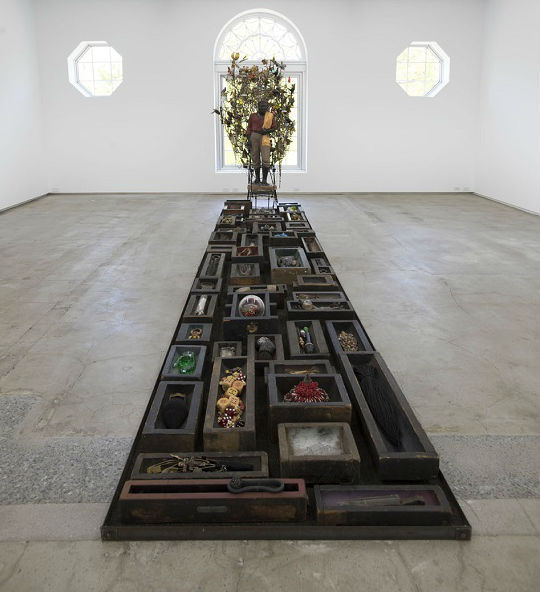 The son of a single African American mother, Cave was born in Fulton, Mo., in 1959, the youngest of seven male siblings. He created his own garments as a child, refashioning his brothers’ hand-me-downs into clothing that was as unique as it was striking. Cave attended the Kansas City Art Institute in the late 1970s and early 1980s, studying fashion and textiles in the Fiber Department. He also designed costumes and participated in performances after training in dance at the Alvin Ailey American Dance Theatre. As he developed his own sense of movement, he translated his choreographic skill into his performances.

Cave is best known for his Soundsuits, elaborate costumes that camouflage and alter the body, masking and creating a second skin that conceals race, gender and class, forcing the viewer to look without judgment. The costumes are constructed from twigs, buttons, beads, toys, sequins and other found objects. When in motion, they offer awe-inspiring color, movement and even sound.

Cave currently lives in Chicago and is the chair of the Department of Fashion and Design at the School of the Art Institute of Chicago.