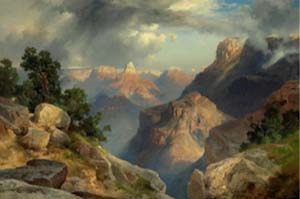 KANSAS CITY, Mo. – A painting in the collection of the Nelson-Atkins Museum of Art will be included in a new series of Forever stamps. Thomas Moran’s 1912 painting Grand Canyon is one of four artworks, all of the Hudson River School paintings, chosen by the United States Postal Service to be featured in the upcoming 12th issuance of the American Treasures series. In total, 25 million copies of the stamp will be distributed.

“We are thrilled that a painting so integral to our American collection will travel so widely and be seen by millions,” said Julián Zugazagoitia, the museum’s director and CEO. “This is a great honor.”

Moran was well-known for his Western landscapes, and Grand Canyon, a stunning representation of the iconic landmark found in Arizona, is an exemplary model of his ability to create balanced compositions. Readability is a principal consideration during the selection process due to the tiny 1 1/2-by-2-inch canvas on which the artwork is printed.

“We were especially mindful of this consideration while reviewing paintings by the Hudson River School artists because one of the hallmarks of the style is exquisite detail in the artist’s renderings of their subjects,” said Roy Betts, a representative of the U.S. Postal Service.

Grand Canyon was acquired by the Nelson-Atkins Museum of Art in 1963 at the bequest of Katherine Harvey.

“What an opportunity—a fabulous painting of a national landmark that can fit in your mailbox. This view of the Grand Canyon remains arresting even at significantly reduced scale. A testament to the power of the original composition, the stamp conveys Thomas Moran’s ability to capture the grandeur of the striated buttes of the legendary chasm, and his talent for creating a convincing illusion of deep space,” said Stephanie Knappe, the museum’s curator of American Art.

The stamp will be available for sale Aug. 21.